Twenty-eight first- and second-year medical students gather over a lunch of sweet and sour chicken, steamed vegetables, sticky rice and a hot topic: the school-to-prison pipeline. The pipeline theory purports that school suspensions and expulsions are pushing children out of public schools and into the juvenile justice system. Many of these children have learning disabilities and histories of poverty, abuse and neglect. 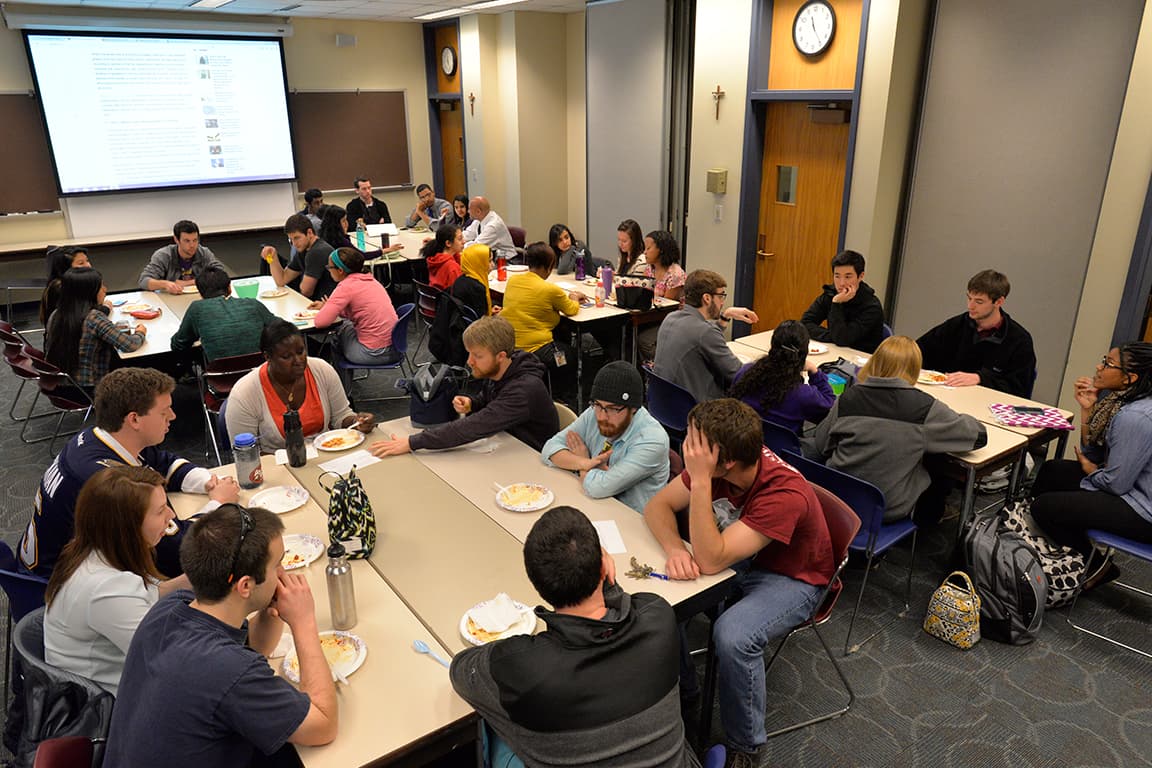 One student questions how students can feel welcome when the first thing they see when they walk through the door is a metal detector. Another student says the security presence and zero tolerance policies are necessary to keep schools safe for other students. A second-year student who was suspended more than a few times in high school says the more time he spent out of class the farther behind he fell and the harder it became to catch up or care.

After about an hour the discussion winds down, and students head to class.

“The intent is not to solve the problem of health or socioeconomic disparity in the United States,” said Dylan Hanami, a second-year medical student from Los Angeles. She and other first- and second-year students have been organizing these weekly discussions on race, bias and socioeconomic disparities since fall 2014. “The problems are outgrowths of historical discriminatory practices. We’re trying to break down walls and have conversations about things that may make us uncomfortable.

“To most people, these topics might not seem directly related to medicine, but they are intimately intertwined,” she said. “You can’t be a compassionate doctor without first being a compassionate person. That requires having an open mind and trying to understand someone’s story because their story has an impact on their health.”

All in the Timing

The students established the discussion groups last fall, not long after two grand juries declined to indict white police officers in the deaths of unarmed black men: Michael Brown in Ferguson, Missouri, and Eric Garner in New York. To protest the verdicts, students at more than 50 medical schools, including Saint Louis University, held “die-ins” on campus.

Students organized candlelight vigils and hosted panels on social justice and community healing. Emotions ran high, and students felt the time was right to have a regular forum in which they could process their feelings in a non-judgmental environment.

The students went to the medical school administration, including Michael T. Railey, M.D., associate dean of multicultural affairs, and Stuart Slavin, M.D. (’83), M.Ed., associate dean for curriculum and professor of pediatrics, where they found support.

“The indictments revealed deep disparities across all lines, whether it’s policing, safety in neighborhoods, crime, housing,” Slavin said. “For medical students I think the decisions raised awareness of how these disparities could play out in the health care setting.”

Steven Monda, a first-year medical student from Ephrata, Washington, and a discussion group coordinator, said he thinks the events in Ferguson were jarring to some medical students. He said talking things through helps clear confusion and relieves some of the frustration that surrounds issues of disparity.

Anywhere from a dozen to 30 students participate in the weekly discussions, which have drawn students from across campus, as well as from Washington University in St. Louis 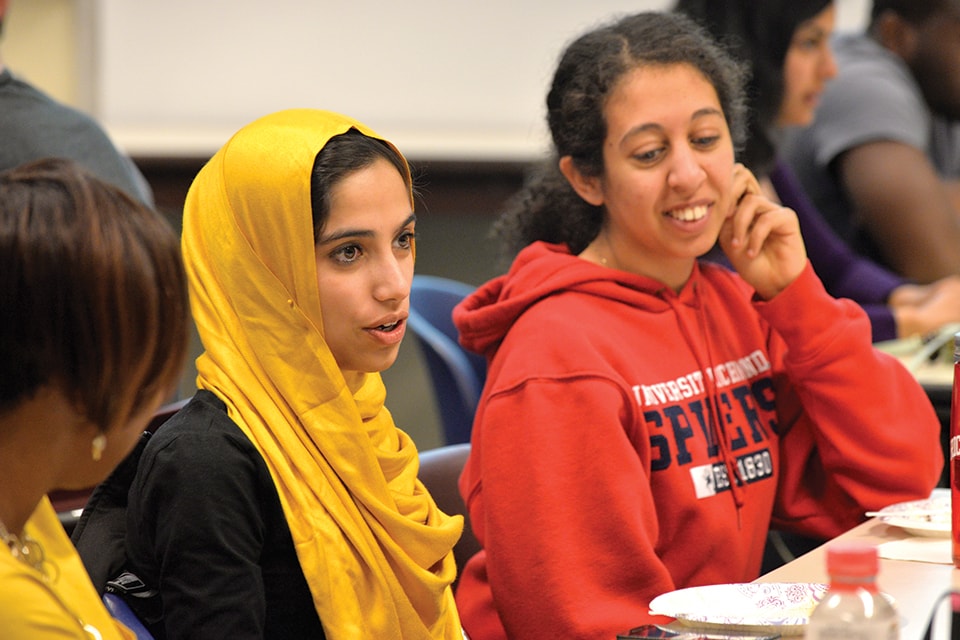 Students have been meeting to discussion privilege and bias since fall 2014.

The verdicts also moved into action School of Medicine faculty, some of whom participated in the die-in and sponsor the weekly student discussion groups. In an editorial printed in the St. Louis American, Railey, wrote that events in Ferguson and New York should serve as reminders to members of the medical community that they must remain culturally humble, culturally competent and ever mindful of the societal context in which they provide care.

“Our students, residents and faculty must be aware of how health is both directly and indirectly affected by crime, violence, proper housing, safety issues, education and political events,” wrote Railey, associate professor of family and community medicine. “Any attitude that would isolate or separate the intricate and ongoing process of good health from socioeconomic and sometimes political events would be erroneous.”

Railey said the verdicts and protests further reinforce the School of Medicine’s longstanding commitment to training future physicians who are culturally competent and responsive to the needs of their communities. He said this commitment begins in the admissions office.

Railey said that members of the admissions committee make an effort to select students who are smart, purpose-driven women and men with a penchant for service and social justice, such as those who volunteer at the student-run Health Resource Center, offer free foot care at homeless shelters, present information on diabetes care at local churches and who choose community service electives.

“These students already are beginning to understand that you have to put your hands to the ground to get a feel for a community’s vibrations,” he said.

Railey further said that the school attracts and attempts to select students predisposed to providing culturally competent care through its M.D./M.P.H program. The program, funded by a grant from the Health Resources and Services Administration, trains future physicians to work with underserved populations. In addition, the grant supports the school’s efforts to develop a curriculum that addresses cultural competency and management of significant community health problems in underserved populations.

Although literature suggests that providing culturally sensitive care promotes positive health outcomes for patients, not all medical schools have formal cultural competency training curricula. Railey said this is particularly troubling because minorities, now roughly a third of the U.S. population, are expected to become the majority by 2042.

The American Association of Medical Colleges urges all medical school to implement a curriculum that provides for longitudinal exposures to culturally humble patient care management. It recommends:

Railey said the medical school curriculum, under the guidance of Slavin, has been following and, in some areas, surpassing these guidelines. Rather than treating cultural competency training as add-on material that could be de-emphasized or marginalized, the school has been weaving the training into its curriculum as a formal, longitudinal thread for nearly a decade.

First- and second-year students are exposed to cultural competency training during their Applied Clinical Skills courses. Slavin, Railey, and other faculty and selected guests present case studies, host panel discussions and facilitate mock interviews that encourage students to talk about how race and ethnicity affect: the presentation of symptoms; health, healing and wellness belief systems; beliefs about how diseases are caused; compliance with care; and attitudes toward health care providers.

Another critical component of competency training is helping students recognize their implicit bias. To do this, Slavin invited Kira Banks, Ph.D., a professor of psychology in the College of Arts and Sciences and an expert on implicit bias, to consult on the school’s curriculum and to present to students during their clinical skills courses. Banks said her mission is to teach students that they need not only to be sensitive to a patient’s cultural experiences, they need to be sensitive to their own.

“We all have biases and prejudices. The key is to be aware of them and keep them in check."

Lessons on implicit bias also are embedded into lectures for third- and fourth-year students. Railey’s office reaches out to graduate students, residents and faculty through regularly scheduled events to keep them abreast of important societal impacts on health.

Although Railey said he is proud of the school’s commitment to cultural competency training, he said the school’s programs must evolve and expand. Railey said the curriculum management committees and other efforts work to bridge the gap between the training students receive during their first two years and their clinical years.

“We want students to take what they’ve learned in class across the street with them to the hospital,” Railey said.

Railey also said he is working on means to measuring outcomes of cultural competency training.

“What I hope to find is that we’re graduating students who recognize they are becoming part of the privileged class, and they must never turn their back on those less fortunate,” he said.