"While the law can't change the hearts of men, it does change the habits. And, in time, habits change attitudes." Martin Luther King Jr. delivered these exact words more than 50 years to a packed audience in the former West Pine Gym. 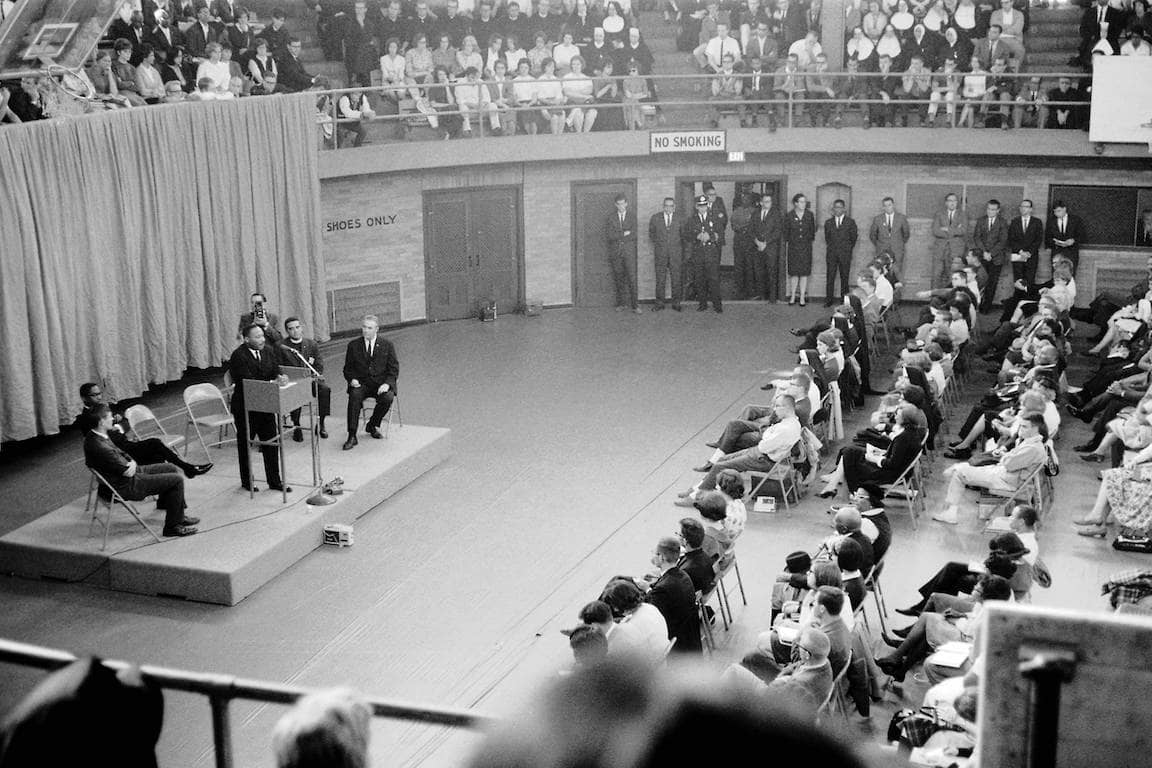 It was only two days before he would win the 1964 Nobel Peace Prize and 14 months after his defining "I Have A Dream" speech. He was invited to speak by the University's Student Conclave Issues Series, an extension of the student body government at the time.

Photos of the event show a rapt crowd of young and old, black and white, male and female. According to the St. Louis Globe-Democrat, nearly 3,900 students, faculty, staff and community members came to hear the nationally known civil rights activist speak about his efforts to end racial prejudice.

One particular group stands out: Row upon row of nuns, their hair covered, dressed in dark habits. Priests are in the audience as well, their white collars prominent against their black clerical clothing.

"As I understand it, Dr. King was influenced by elements of the Catholic social teaching tradition, such as, first and foremost, making a philosophical case based on reason that all people are created equally and carry the same dignity," said Christopher Collins, S.J., SLU's special assistant to the president for mission and identity. "Revelation from God in the scriptures re-enforces this; the Book of Genesis indicates that God created humanity in the image and likeness of Himself."

A theologian and minister himself, King placed much of the burden of the fight for equality on churches and other religious institutions. During visits to St. Louis, he spoke at Washington Tabernacle Missionary Baptist Church, United Hebrew Congregation, Temple Israel and Christ Church Cathedral, calling on these institutions to challenge their own prejudices.

It's a call SLU answered.

"The Jesuits have always been committed to justice," said Robert Beekman (A&S ‘65, Law ‘84). Beekman highlighted the work of long-time University president Paul Reinert, S.J., as an example. Reinert served from 1949 to 1974, and had long advocated for the admission of African-American students. Reinert was also committed to keeping the University in the city during a time when many urban institutions moved to the suburbs as part of the "white flight."

"He was a really decent, fair-minded man who was committed to justice, and I think it was his leadership that helped to bring Dr. King here," Beekman said.

Following King's appearance, Reinert wrote a thank-you note, which ran in the University News, to the Saint Louis University community for the generous welcome it gave King. He wrote that King told him he'd "rarely appeared before an audience which accorded him the warm hospitality and thoughtful attention" the students had afforded him.

"He talked about seeing the worth in people and that we were here to enhance this world and to love. It was in God's plan for us to get educated and use the resources given to us to help each other."

Alice Lemp (A&S ‘65, Grad ‘68) was a senior in the College of Arts and Sciences when King visited campus.

"I remember one of the things King talked about was following Jesus, even if this means to Calvary," Lemp said.

Betty Patton (Grad SW ‘65), one of the few black students attending SLU at the time, said she left the gym feeling as if she "could move mountains."

"He talked about seeing the worth in people," Patton said. "That we were here to enhance this world and to love. It was in God's plan for us to get educated and use the resources given to us to help each other."

The role of religion and of the church, especially the black church, throughout the Civil Rights Movement is one that has been highlighted and researched for years.

"When you think about the images you've seen from the March on Washington or even from 1965's Bloody Sunday in Selma, you will always see clergy," said Jonathan Smith, Ph.D., special assistant to the president for diversity and community engagement. "That means King, Ralph Abernathy, Jesse Jackson, Andy Young and Hosea Williams. That means Catholic priests and nuns. That means rabbis."

Religious leaders — of all different backgrounds — marched for justice in the 1960s. They marched because, as Collins put it, the inherent dignity and equality of all people is foundational.

He added: "Whether you're talking about Dr. King, the Catholic Social Teaching tradition, the Society of Jesus or just any person using his or her reason."