A New Home for Health

The Health Resource Center doesn’t open until 9 a.m., but the waiting room is three-quarters full by 8:15. By the time the first patient is ushered into an exam room, all chairs are occupied. Saint Louis University medical students, social work students and physical therapy students are coursing through the clinic’s hallways. For the next three hours they will be vaccinating patients, performing eye exams, palpating abdomens and keeping a promise made 20 years ago.

In 1994, five SLU medical students appealed to St. Augustine’s Church to allow them to open a free health care clinic in the basement of one of the church’s buildings. St. Augustine leaders were hesitant; they were worried that the students wouldn’t be able to sustain the clinic as they progressed through their education and moved on. The students, however, convinced the church that they were committed to caring for the underinsured and underserved in north St. Louis City. 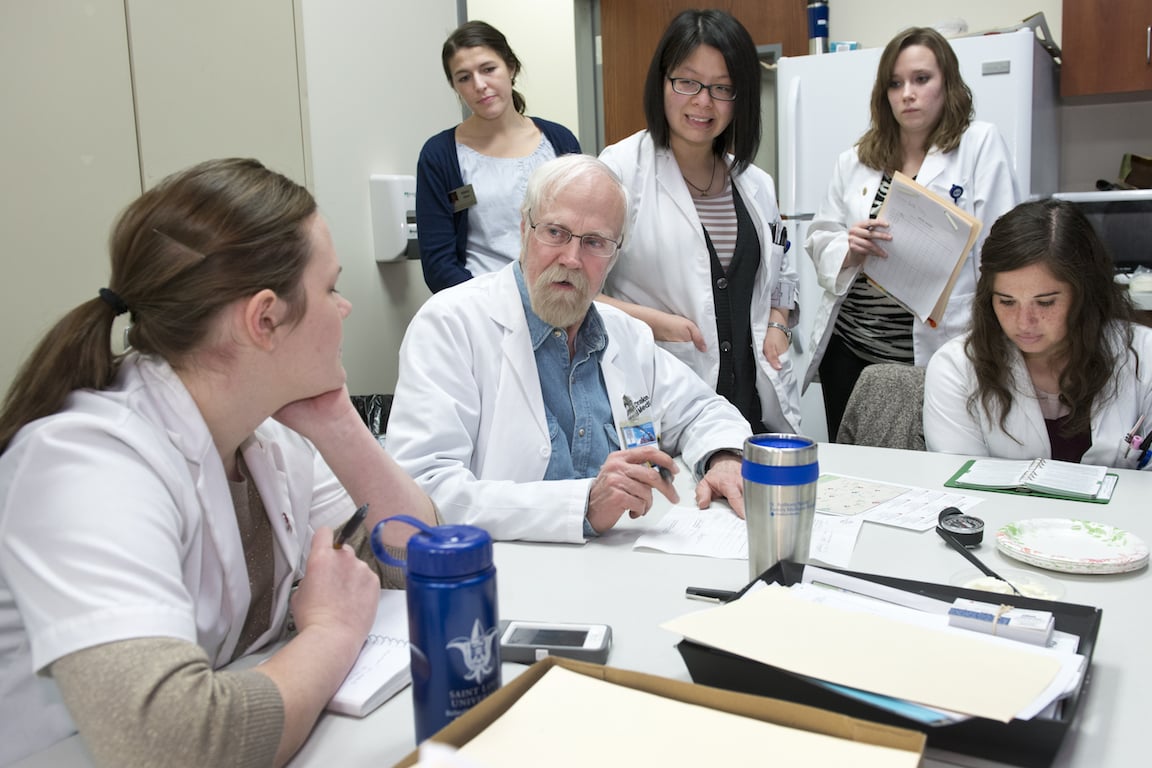 They kept their word. Every Saturday morning for the past two decades, SLU medical students have provided primary and preventive care to walk-in patients. The Health Resource Center (HRC) is the only entirely student-run free health care clinic in the country. While School of Medicine faculty members oversee the care provided, students direct the clinic’s mission and operations.

Students saw fewer than 300 patients that first year, but as the community gained confidence in the HRC and the students’ commitment to the neighborhood, the numbers climbed. Patients came from as far away as Illinois to access the free care.

Patient volume increased so much — students saw nearly 1,000 patients last year — that the HRC outgrew its 1,300-square-foot basement clinic and moved to a new location in August 2013. The move more than doubled the clinic’s size. The space also offers features that were unavailable at the former clinic, such as private interview rooms, brighter lighting, and central heating and cooling.

Dr. Lauren (Page) Pommert (Med ’13), one of the medical students on the relocation committee, said they were presented with sites outside north city but never considered leaving the community, which has the highest heart disease mortality rate, the fifth-highest diabetes mortality rate and the second-highest rate of low birth weights in St. Louis.

“North city is our home,” she said. “We outgrew our space but not our original mission.”

The new clinic is on North Kingshighway Boulevard, 1.5 miles from the HRC’s original location and on three major bus lines. It’s on the second floor of the Victor Roberts Building in space donated by Dr. Eva Frazer, a former member of SLU’s board of trustees, and her husband, Steven Roberts. The donation is a huge bonus, given that about a quarter of the clinic’s operating budget had gone toward rent at St. Augustine’s.

“With the extra space and extra funds, we’re expanding our hours and broadening the services we provide to our patients,” said Matthew De Cuffa, a second-year medical student who is on the HRC clinic leadership team. “Good health goes beyond the scope of medicine.”

The new programs include a counseling clinic, physical therapy services, an asthma clinic and a homeless care clinic. The expansion is supported by volunteers from SLU’s School of Law, Doisy College of Health Sciences, College for Public Health and Social Justice, and College of Arts and Sciences. Patients move through the clinic smoothly with the help of undergraduate pre-med and other health professions students who volunteer as patient liaisons. They answer questions, register patients and pull charts.

Shirley Robinson, 61, has been coming to the HRC for 14 years. Recently she visited for a hepatitis A shot required by her employer. Last year she visited the clinic because she was worried about her elevated blood pressure. After students educated Robinson on her eating habits and exercise, she changed her behaviors, lost 20 pounds and got her blood pressure back to normal.

“This is my first visit to the new clinic, and it’s wonderful, so much bigger and welcoming,” she said. “But the most important thing is the care. The students always take their time with me, and I appreciate that so much.” 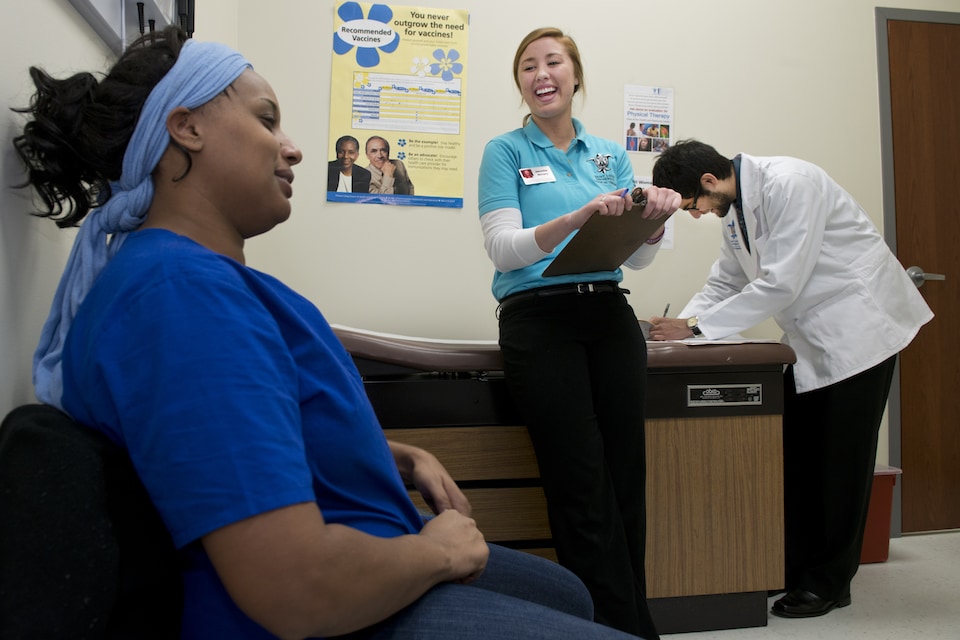 Former preschool teacher Shirley Riley also struggles with high blood pressure. She’s been coming to the HRC for four years for blood pressure checks and medications, free of charge, through the HRC’s prescription assistance program. This winter Riley also has been working with SLU physical therapy students on exercises to alleviate her knee pain.

“There’s so much more room here, and it feels like a real doctor’s office,” Riley said. “It may take a while to get in to see the doctors, but it’s worth the wait. And when you’re on a fixed income, you can’t beat free.” Dr. John Morley, professor of internal medicine and director of the divisions of geriatric medicine and endocrinology, has been the HRC’s medical director since the day it opened 20 years ago. He said it’s phenomenal that the students have managed to keep the clinic going and continue to provide superb care. Morley said the clinic will fill a void in the community even with implementation of the Affordable Care Act (ACA) this year.

“The ACA eventually will alter the clinic’s clientele, but for the immediate future there remains a substantial number of uninsured,” he said. “Plus, many working people can’t get to the doctor during the week, so the Saturday morning hours are ideal for them. Co-pays with the ACA also remain an obstacle to care for people living near the poverty line. I imagine the waiting room will be full for a long time to come.”

The HRC runs on volunteer staff and donations; 90 percent of the HRC’s annual budget is generated at the clinic’s annual spring auction fundraiser. If you would like to donate items for the auction, email Peony Khoo at ckhoo@slu.edu. To make a gift to the clinic, email Mike Higgins at mhiggin9@slu.edu.

of HRC patients have no primary care provider