Midtown St. Louis has been on the move for years, but area development has accelerated since 2017 when the City of St. Louis adopted Saint Louis University and SSM Health’s “St. Louis Midtown 353 Redevelopment Plan.” In just over two years, the plan has attracted development which promises to continue the growth of Midtown. On Thursday, October 10, the Chaifetz School’s Edward Jones Dean’s Breakfast Series welcomes Brooks Goedeker, executive director of the St. Louis Midtown Redevelopment Corporation, and Steve Smith, CEO of the Lawrence Group, to discuss the new Prospect Yards district, the City Foundry STL development and the future of Midtown.

Brooks Goedeker currently serves as the Executive Director of the St. Louis Midtown Redevelopment Corporation. In that role, Goedeker is responsible for attracting investment in the nearly 400-acre area around and between SLU’s north and south campuses. He also develops land-use plans, reviews development proposals and works with public officials to oversee development for the area. Prior to joining SLU, Goedeker served as the executive director of Park Central Development, a nonprofit organization that promotes development in the city’s central corridor, including The Grove and parts of the Central West End. At Park Central Development, he oversaw approximately 50 percent of all construction projects in the city of St. Louis from 2013 to 2017 with project budgets totaling more than $2.2 billion. Goedeker was born in the city of St. Louis, attended Saint Louis University High School and holds a Master of Social Work from Saint Louis University and Master of Arts in Nonprofit Management from Washington University in St. Louis.

Steve Smith currently serves as CEO of the Lawrence Group, an integrated planning, design, architecture and construction firm with offices in St. Louis, Austin and New York. Active in Midtown’s redevelopment, the Lawrence Group led design of the new SSM Health Saint Louis University Hospital opening in Fall 2020 and is currently developing the former Century Electric foundry into a 15-acre site to feature office, retail and entertainment space and St. Louis’ first food hall. The firm’s work has been recognized by the city of St. Louis with a Mayor’s Award, Business Leadership Award and Development of the Year Award. Smith was a founding member of the Lawrence Group in 1983. He holds a Bachelor of Architecture from the University of Kansas.

From companies big and small to a wide-range of economic development organizations, St. Louis has no shortage of local players working to move the region’s economy forward. There is perhaps no bigger local influencer, however, than St. Louis County Government. On Wednesday, September 11, 2019, the Chaifetz School of Business will host the man in charge, St. Louis County Executive Sam Page, for a discussion on his goals for the region and county initiatives to drive growth at the first event of the 2019-2020 Edward Jones Dean’s Breakfast Series.

Dr. Sam Page was elected as St. Louis County Executive in April 2019. Prior to taking over as county executive, he served as chairman of the St. Louis County Council, representing citizens of the 2nd Council District since August 2014. Dr. Page also represented portions of St. Louis County in the Missouri House of Representatives from 2003-2008.

Dr. Page earned an undergraduate degree in Chemistry while working his way through college. He received his Doctor of Medicine from the UMKC School of Medicine where he was selected to Alpha Omega Alpha medical honor society. Dr. Page completed a residency in anesthesiology at Northwestern University and a fellowship in Pain Management at Washington University in St. Louis.

Leadership is as important in business today as it ever has been. On April 9, join Penny Pennington, managing partner of Edward Jones, for the Chaifetz School's final Edward Jones Dean's Breakfast of 2018-2019 and a conversation on the importance of values for effective leadership.

Penny Pennington is the managing partner of Edward Jones, a Fortune 500 financial services firm. As managing partner, the sixth in the firm’s 97-year history, Pennington is responsible for the firm’s strategic direction, working together with the more than 43,000 associates across the U.S. and Canada who make a meaningful difference in the lives of more than 7 million clients by helping them financially achieve their most important goals.

Pennington began her career with Edward Jones in 2000 as a financial advisor in Livonia, Mich. At the firm, she has held leadership roles in New Financial Advisor Training, Branch Office Administrator Development and Branch and Region Development before leading the Client Strategies Group in 2015.

Pennington earned a bachelor’s degree in commerce with a concentration in finance from the University of Virginia and an MBA from Northwestern University’s Kellogg School of Management. She holds the Chartered Financial Analyst® (CFA) designation and is a graduate of Wharton’s Securities Industry Institute.

While the digital age has created a boon of business opportunities, those opportunities have not come without challenges, and effective cybersecurity has become an imperative for any business operating in today's environment. Join the Chaifetz School of Business Edward Jones Dean’s Breakfast Series on February 28 for a discussion on this critical business function. Moderated by Jason Carter, president of UNCOMN (formerly Aegis Strategies), the panel will bring together  leading cybersecurity experts from across sectors to discuss current and future cybersecurity challenges and innovative solutions to address these threats.

Jarrett Kolthoff  is the founder and chief executive officer of SpearTip - Cyber Counterintelligence. In the role, he works every day with SpearTip’s cyber counterintelligence operatives to identify, assess, neutralize, exploit and eliminate threats waged against the company’s clients. Kolthoff is a former Special Agent – U.S. Army Counterintelligence with over two decades of experience in the field of information security.

Sony Jacob is chief information officer for SSM Health. As CIO, Jacob oversees implementation of the health care organization’s IT strategy and systems. He is also in charge of expanding the organization’s internal IT consultancy to partner with other senior leaders in addressing business issues and aligning technology assets for future growth.

Major General Stephen E. Farmen is currently the Commanding General of the Military Surface Deployment and Distribution Command. He holds a Master's Degree in National Security and Strategic Studies from the Naval War College and completed the Senior Service College Fellowship as the first military fellow at the Massachusetts Institute of Technology's Center for Transportation and Logistics.

MG Farmen's awards and decorations are highlighted by the Distinguished Service Medal, the Legion of Merit and the Bronze Star Medal, among many others.

The ability to analyze and interpret data has never been more integral to business success than it is in today’s business environment. On October 10, the Chaifetz School of Business Edward Jones Dean’s Breakfast Series will bring together those who perhaps utilize data analytics most in their profession – chief financial officers. Moderated by David Heimburger, vice president and chief financial officer of Saint Louis University, the panel will include CFOs from retail, public utilities and healthcare to discuss the importance of data analytics in their roles and the future of the accounting and finance professions.

For more than 25 years, Tom Chulick has championed regional economic growth as a financial services industry executive and a committed civic leader. Since March 2018, Chulick has served the St. Louis Regional Chamber as president and CEO. Chulick discussed keys to growing the St. Louis economy and the Chamber’s priorities to help drive that growth at the Edward Jones Dean’s Breakfast Series on Thursday, Sept.  6. 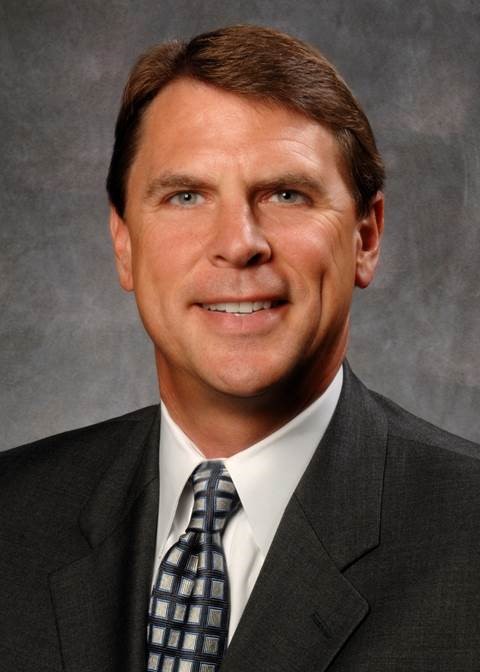 During his tenure at UMB, the St. Louis Region market achieved unprecedented sales growth with a six-year compounded annual growth rate over 24 percent. Chulick led a successful turnaround in three markets and as a result, his model became the UMB Bank standard. During his tenure, Forbes Magazine recognized UMB Bank as one of the best run banks in America for five consecutive years.

Chulick holds a bachelor’s degree in business administration and management from Rockhurst University. He previously served as a member of the Chaifetz School of Business Executive Advisory Board.

Ray Barrett is the founder of Biomedical Systems, a global company founded in 1975 specializing in clinical trial services and medical devices. Prior to Biomedical Systems, he founded Landshire Food Systems in 1959 and developed the company into a multimillion dollar enterprise before it was acquired by Southland Corporation in 1977.  Barrett earned a Bachelor of Commerce from Saint Louis University in 1960 and was an inaugural inductee to SLU’s Entrepreneurial Alumni Hall of Fame.

Doug Fabick is CEO of Fabick Cat, the exclusive dealer of Caterpillar equipment, power systems, arts and service, and rental equipment for major portions of Missouri, Illinois, the entire state of Wisconsin and the Upper Peninsula of Michigan.  He is the fourth-generation leader of the company, which was founded on South Grand in 1917. Fabick earned a BSBA from Saint Louis University in 1990.

Tim Fogerty has been CEO of Bissinger’s Handcrafted Chocolatier since 2013. Prior to taking the helm at the St. Louis-based confectioner, he founded Gateway EDI, a provider of healthcare billing solutions which was sold to Colorado-based TriZetto Group in 2011. Fogerty’s charitable gift established SLU’s Blue Diamonds Accelerator program in the Chaifetz Center for Entrepreneurship to support the development of SLU student’s entrepreneurial ideas.