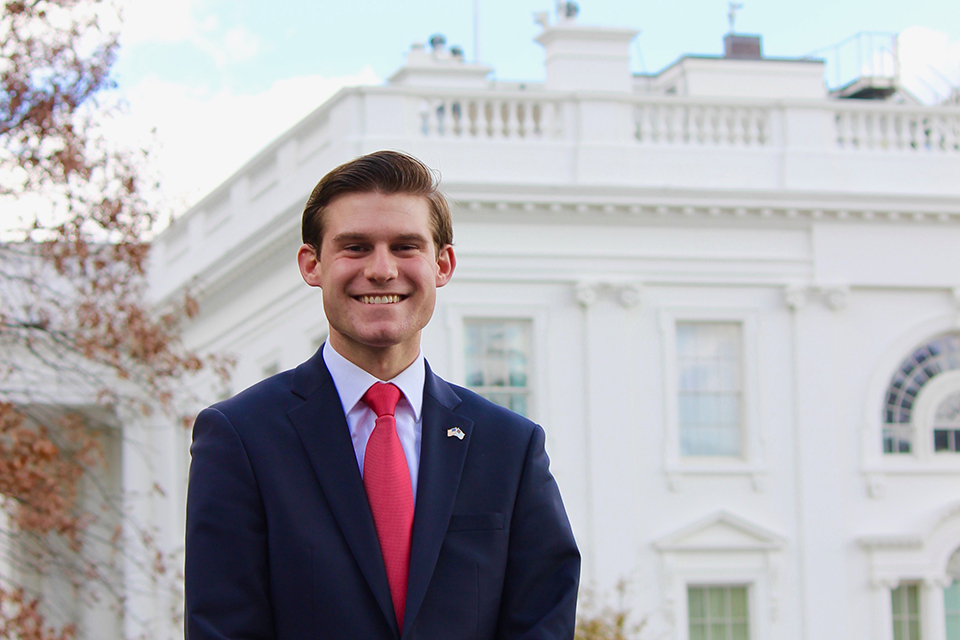 Students often dream of working for a Fortune 500 company or prestigious organization one day; Garrett Ziegler made it his reality — before graduation.

Garrett Ziegler, a 2018 graduate of Saint Louis University's Chaifetz School of Business, discovered the perfect internship to apply his background in economics. By utilizing the Chaifetz School's dedicated Valerie A. Davisson Career Resources Center, Ziegler landed an internship at the White House in 2017.

“My internship at the White House was tremendous for my career," Ziegler said. "I served as a research assistant under the special assistants to the president for agriculture and infrastructure in the National Economic Council (NEC).”

The NEC compiles a wide range of economic policies in a single report to suggest to the president, including health care, tax and retirement, the financial system, cybersecurity, energy and the environment. Interns have the opportunity to work closely with the NEC  by completing in-depth research, coordinating policy meetings and delivering general administrative support.

“One takeaway is to always be prepared for every meeting and interaction, no matter how small," Ziegler said.

"On the infrastructure team, Garrett regularly created early morning news briefs and made sure that all meetings went soundly coordinated and to plan," said Ziegler's internship supervisor. "His service was greatly appreciated."

The Chaifetz School's Career Resources Center nurtured Ziegler's professional skills by helping him with his resume and conducting mock interviews that prepared him to interview for the research assistant position at the White House.

"I spoke with Allison Roba, Chaifetz School internship coordinator, several times during my time in undergrad," Ziegler said. "Each time, she and the others in the office were gracious and spent as much time with me as I needed.”

Ziegler will carry the unique skill set from his comprehensive education at SLU and the practice gained from his internship at the White House into his future endeavors.

Currently, Ziegler works as a Fellow at the John Jay Institute in Philadelphia but is looking to continue his skill set in other disciplines.

“I am constantly drawing on things from my time at SLU, whether it’s a medieval author I wrote about during my literature class or an economic theory espoused by Adam Smith,” he said. “I look forward to attending law school in a few years, rounding out my education."

Finding the right internship to support a student’s vision of their future is exciting but also challenging. The Chaifetz School of Business' Career Resources Center aids students in finding the best internship possible to achieve their individual career goals.

Learn more about internship opportunities for business students by visiting the Career Resources Center located in the Chaifetz School of Business.