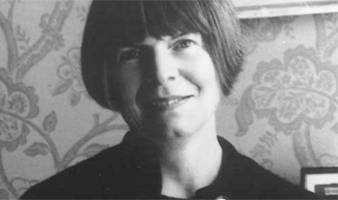 Margaret Drabble will attend a ceremony held in her honor at 5 p.m. Tuesday, Oct. 21

English author Margaret Drabble will receive the 2003 Saint Louis University Literary Award from the Library Associates. The writer will attend a ceremony held in her honor at 5 p.m. Tuesday, Oct. 21, in the University's Anheuser-Busch Auditorium of the John Cook School of Business, 3674 Lindell Blvd. The program is free and open to the public.

This is the 36th year the award has been given by the Library Associates, a group dedicated to enriching the cultural life of the area and providing financial help to the University's libraries. Pulitzer Prize winners, Nobel laureates and other distinguished writers from the United States and abroad have come to St. Louis to receive the honor and address members of the community.

Born in Sheffield, England, Drabble has been honored widely for her work, receiving he E.M. Forster Award from National Institute and American Academy of Arts and Letters. Her book The Middle Ground was named a notable book by the American Library Association. She holds a number of honorary degrees from eight universities and was a member of the Royal Shakespeare Company.

Drabble is the author of The Seven Sisters (2002), The Peppered Moth, The Witch of Exmoor, and The Millstone. She also is editor of The Oxford Companion to English Literature.

Drabble has three children and is married to biographer Michael Holroyd. She lives in London.

The Saint Louis University Library Associates is a membership group dedicated to making the literary treasures of the University known to the community, enriching the cultural life of the area and providing financial help to the libraries.