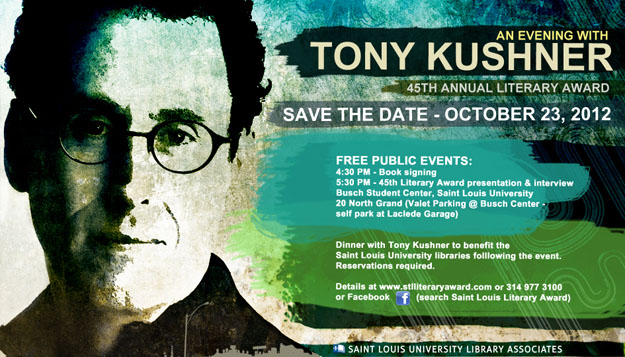 The Board of the Library Associates of Saint Louis University is pleased to announce the recipient of the 2012 Literary Award, Tony Kushner, winner of the Pulitzer Prize, two Tony Awards, an Emmy Award, and three Obie Awards, in addition to numerous literary accolades.

Born in New York City in 1956, and raised in Lake Charles, Louisiana, Kushner is best known for his two-part epic, Angels in America: A Gay Fantasia on National Themes. His other plays include A Bright Room Called Day, Slavs!, Hydriotaphia, Homebody/ Kabul and Caroline or Change. In addition to his many collaborations on screenplays and translations, in 2009 he wrote the libretto for Brundibár, which was performed by the Opera Theatre of Saint Louis.

Kushner received the Arts Award in Literature from the American Academy of Arts and Letters, the PEN/Laura Pels Award for a Mid-Career Playwright, a Spirit of Justice Culture Award, and a Cultural Achievement Award from The National Foundation for Jewish Culture, among many others. Caroline or Change, produced in the autumn of 2006 at the Royal National Theatre of Great Britain, received the Evening Standard Award, the London Drama Critics’ Circle Award and the Olivier Award for Best Musical.

In September 2008, Kushner became the first recipient of the Steinberg Distinguished Playwright Award, the largest monetary theatre award in the U.S. He was also awarded the 2009 Chicago Tribune Literary Prize for lifetime achievement.

The 45th annual Literary Award will be presented on Tuesday, October 23, 2012 at the Busch Student Center and will include an interview with Mr. Kushner. The Award and interview are free and open to the public. Following the ceremony, a private dinner will be held for members of the Library Associates.

An Evening with Tony Kushner

or send check by mail

Dinner with Tony Kushner to benefit the libraries following the public event. Space is limited; reservations required by October 17th. For information and reservations contact Donna Neely at 314 977 3100 or neelyd@slu.edu.