Born in Oxford, Francisco Javier Jáuregui began to study classical guitar at the age of seven with Kenton Youngstrom at the Community School of Performing Arts (today known as the Colburn School of Music) in Los Angeles, California. After moving to Madrid he continued his studies with Agustín Maruri and later with Óscar López, also attending master-classes with teachers like Pepe and Celedonio Romero.

After obtaining his Licenciate Diploma from the Associated Board of the Royal Schools of Music he went to study at the Guildhall School of Music and Drama in London where he obtained a Masters Degree of Music in Performance (Advanced Instrumental Studies). At Guildhall he studied guitar with Professor Robert Brightmore, theorbo and chamber music with David Miller and improvisation with David Dolan.

Francisco Javier has played many recitals both as a solo performer and with different chamber combinations in Spain, England, Italy, France, Iceland, Russia, Scotland and Southeast Asia in venues such as St. Martin in the Fields, the Royal Palace of El Pardo, St. James' Palace (London), the Saint Petersburg Philharmonic Society Glinka Hall, Auditorio Nacional de Música de Madrid, and the Linbury Studio theatre (Royal Opera House, Covent Garden). He has performed guitar concertos by Vivaldi and Rodrigo (Concierto de Aranjuez) with La Orquesta Schola Camerata and has collaborated with the Saint Petersburg State Symphony Orchestra and Sonor Ensemble (a group formed by members of the National Orchestra of Spain).

He has premièred music by a number of composers such as Þorkell Sigurbjornsson, Agustín Castilla Ávila, Hugi Gudmundsson, and Hideyuki Takemoto.

He works regularly with Icelandic mezzo-soprano Gudrún Ólafsdóttir and since 1997 he has performed with violinist Elena Jáuregui as the Roncesvalles Duo. At present he teaches classical guitar and coordinates the music department at St. Louis University, Madrid Campus. From his position at Saint Louis University and in coordination with the Royal Conservatory of Music in Madrid, he directed The 2008 Interpretation of Spanish and Latin American Song international music festival. Since 2001 he has participated in educational programs organized by The Wigmore Hall in London. He is also co-director and co-founder of FIMNa (the International Music Festival of Navarra).

His CD with mezzo-soprano Gudrún Ólafsdóttir Mine is Yours which features Icelandic and Spanish songs, including some of Jáuregui's own compositions, was released in December 2008. 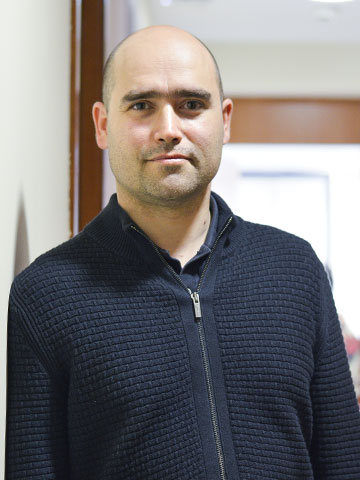