The Everyday Miracles of Fr. Figaredo 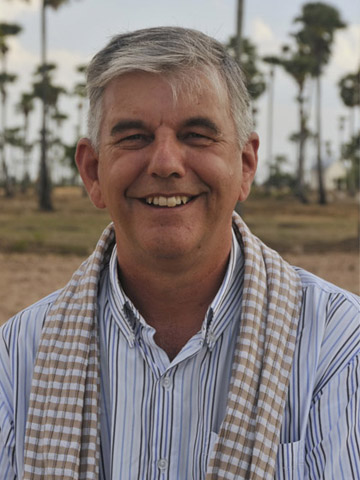 Of all the adversity and suffering that Enrique Figaredo, S.J., had witnessed in his more than 30 years of service in Cambodia, Veasna’s case stood out as one of the most puzzling.

Veasna was one of many students receiving an education at Banteay Prieb (“The Dove House”), a training center and home for young people with disabilities that Figaredo founded in 1991. Veasna’s life and schooling at Banteay Prieb, though, was frequently constrained by a mystery condition that left her partially paralyzed at night.

“I would follow her case personally,” recalled Figaredo, pausing for a few moments to shake hands from admiring onlookers who moments earlier had watched Figaredo receive an honorary doctorate at Saint Louis University’s campus in Madrid.

“She could hardly go to school anymore but I would encourage her to go every morning to study English, I would help her with the wheelchair, with school, with scholarships, but in the afternoon…” His voice trailed off. But in a split second, the corners of his mouth turned upwards and his kind eyes rejuvenated. The “Bishop of the Wheelchairs,” a nickname Figaredo had earned long ago for his vocation, had a happy ending to this story.

“One day, I invited a former classmate of mine, a neurologist, to visit Veasna,” he said. “She told me, let me try this medicine. If it works after two days it would be wonderful. If it does not work after two days then I have no solution.”

After two days, the medicine was still working. After ten years, the medicine had been long forgotten; Veasna was enjoying a life on her feet and walking to her job. And next month, she will walk somewhere she thought to be even more improbable: her wedding aisle. “After hearing that,” Figaredo said, “I started to cry.”

Enrique Figaredo Alvargonzalez has dedicated his life to helping those of children with disabilities and underprivileged children like Veasna since he first arrived in Southeast Asia in 1985. He began his service in Thailand, but soon followed the Cambodian refugees who packed their bags and returned to their homeland. It was in Cambodia where his miracle working blossomed.

He first got to work helping people maimed by landmines, healing scars left by the dictatorship of Pol Pot. Crusading against conflict and explosives, he founded Banteay Prieb in 1991 with the mission of educating children maimed by landmines and teaching people with disabilities work skills and formed a working relationship with the International Campaign to Ban Landmines, which was awarded the Nobel Peace Prize in 1997. In Battambang in 2001, he founded the Arrupe Center, which he named after Father Pedro Arrupe, who founded the Jesuit Refugee Service (JRS) in order to aid refugees fleeing their homelands.

But that was back in the '90s and early 2000s. This month, those projects are estimated to have benefitted over 200,000 people. For Figaredo, who heaps praise upon the students and the alumni who have spent time at his centers, the guiding principle behind his service has remained unchanged over all those years.

There are two components that are very important. One is to talk to professionals. And the other is faith.

The victims of war in Cambodia often take ostensibly similar profiles to Veasna in Figaredo’s service centers: refugees and people with disabilities. But chipping away at the veneers of these groups, however, reveals a unique set of stories, disabilities, and families. Everyone is different, bound together only by misfortune, a new place to learn, and of course, having faith that a better future awaits. In Cambodia, where nearly two million landmines were planted between the 1970s and early 1990s according to the Scottish NGO Halo Trust, and where corruption and poverty continue to be widespread, that need for faith is always in demand.

But to keep that faith, especially in the face of some of the seemingly insurmountable adversity that comes through the doors of places like Banteay Prieb or the Arrupe Center, is a different story. The mind, Figaredo says, must find something else to focus on. Working, and training how to work, is that focus. At Banteay Prieb, people with disabilities have the opportunity to train and to learn work skills, the most notable of which involves the construction of Mekong-style wheelchairs, the design of which, wooden and three-wheeled, allows for efficiency, easy disassembly and shipment. Constructing the Mekong-style wheelchairs helps students free their mind while providing them with technical training. “It means a lot for their livelihoods and it also helps society accept that people with disabilities are people too, fully capable of doing good things,” said Figaredo.

Societal acceptance and inclusion of those with disabilities inspires confidence, and confidence, according to Figaredo, leads to magic. “If you give a disabled girl the chance to dance, then wow!” his hands flaring above his head in an orchestrated moment of jubilation, “suddenly she feels wonderful, she moves with beauty and movement, and her disability becomes a smaller problem and other new things become more important.” And just like that, he said, society inches ever closer to erasing the stigmas that paint people with disabilities as incapable or lowly.

“He gives people importance and dignity,” said Federico Barreras, who volunteered at the Arrupe Center for two years and now works as a project manager at an NGO called Open Entities. In September 2014,  Barreras was in a Cambodian hospital when he walked past the room of a young boy who had stepped on a landmine. It was not long before Figaredo was there to help. “I remember he was very busy that day, but he immediately stopped what he was doing and came to the hospital. He brought a girl with a prosthetic leg and a girl with polio, both living normal lives and with jobs, to the hospital,” said Barreras. Figaredo took a step back as the girls told the mother and father that there were others who had accidents and were living normal lives. “It was inspiring to see Figaredo stand back and console the boy and his parents," Barreras said.

When Figaredo first came to Cambodia, it was officially on assignment. But the real reason why he came, he says, and coincidentally why he has stayed ever since, was because he “wanted to put faces to the numbers.” An economist by schooling, that meant using his quantitative and practical background to help the new wave of refugees born out of the turmoil in the region. Figaredo wanted to mesh economics with service and intertwine his business acumen with the politics of individualized and personalized attention.

Fr. Figaredo has spent much of his life doing mission work in Cambodia.

In Cambodia, where farming is the main industry and 80 percent of the populace lives in the countryside, it seems like a tall task to happily wed the country’s economy with people with disabilities. Farm jobs often are laborious and debilitating. It is hardly a glamorous or moneymaking career. But with faith and some perspective, job opportunities can open up in Cambodia, and that marriage seems more and more possible.

People with disabilities, Figaredo said, are still able to work in a smaller factory or a shop. Or they can work in bars and restaurants; he and others at his service center have taught students to take orders, serve food, present the bill, and count money. More recently, the Arrupe Center has expanded to educate and reintegrate people with mental disabilities, Figaredo said in his acceptance speech at the University.

Even on the topic of the current nuclear arms landscape, one that is familiar to Figaredo, he shows flashes of his economic background. “The problem is the commerce of weapons. There are too many weapons in the world and they are too cheap; people mix money with trading with weapons…” Figaredo knows disarmament better than most. Sister Denise Coghlan, who has worked with Figaredo in campaigns to ban landmines, said he has pushed for its progress for 24 years. “He even took some of the amputee ambassadors to meet the Pope and world leaders as far back as 1995,” said Sister Coghlan.

As the reception for his honorary doctorate winded down, the goodbyes became more frequent and Figaredo got busier. He smiled between handshakes and plates of food handed to him, which, of course, he offered to share immediately. “Be prepared for some interruption,” Paul Vita, Ph.D., academic dean and director of Saint Louis University in Madrid, had warned earlier. “He is very, very popular.”

Spending even five minutes with Figaredo, it is not difficult to see why. Just as he has been able to juggle miracle working with a pragmatic eye, Figaredo is able to perfectly balance a one-on-one conversation with the crowds of people wishing to speak with him. “He is able to build a special connection with people,” Barreras said. “He always find the time to listen to people and always pays the utmost attention to that person.”

For Figaredo, that attitude and faith has helped make his service centers, and his miracle working, flourish. But so have training, work and pragmatism. Figaredo is quick to make a point of that. For instance, whenever he first meets with refugees, his mind jumps to the necessities – housing, water, and food – but soon zooms out to the bigger picture. “What sector can we train them in?” he wonders. “How can they continue as a professional, could it be as a veterinarian, an architect, what else can they do?”

For over three decades, Figaredo has lived and proven the old adage that if you give a man a fish, you feed him for a day, but if you teach a man to fish, you feed him for a lifetime. He does more than provide a helping hand out of faith; he educates, encourages, and trains people to return to society without a hitch. Look no further than his next project, which he calls a new social enterprise for people with disabilities, to see his philosophy in action. “My vision is of a boutique hotel that is run by the disabled,” Figaredo says.