SLU’s Fledgling Chess Team Plays to Win Across the Board

But the most notable number of all may be this one: seven months. That’s how long the five players on SLU’s squad — Dariusz Swiercz, Yaroslav Zherebukh, Francesco Rambaldi, Cemil Can Ali Marandi and Nozima Aripova — have been competing as a team. 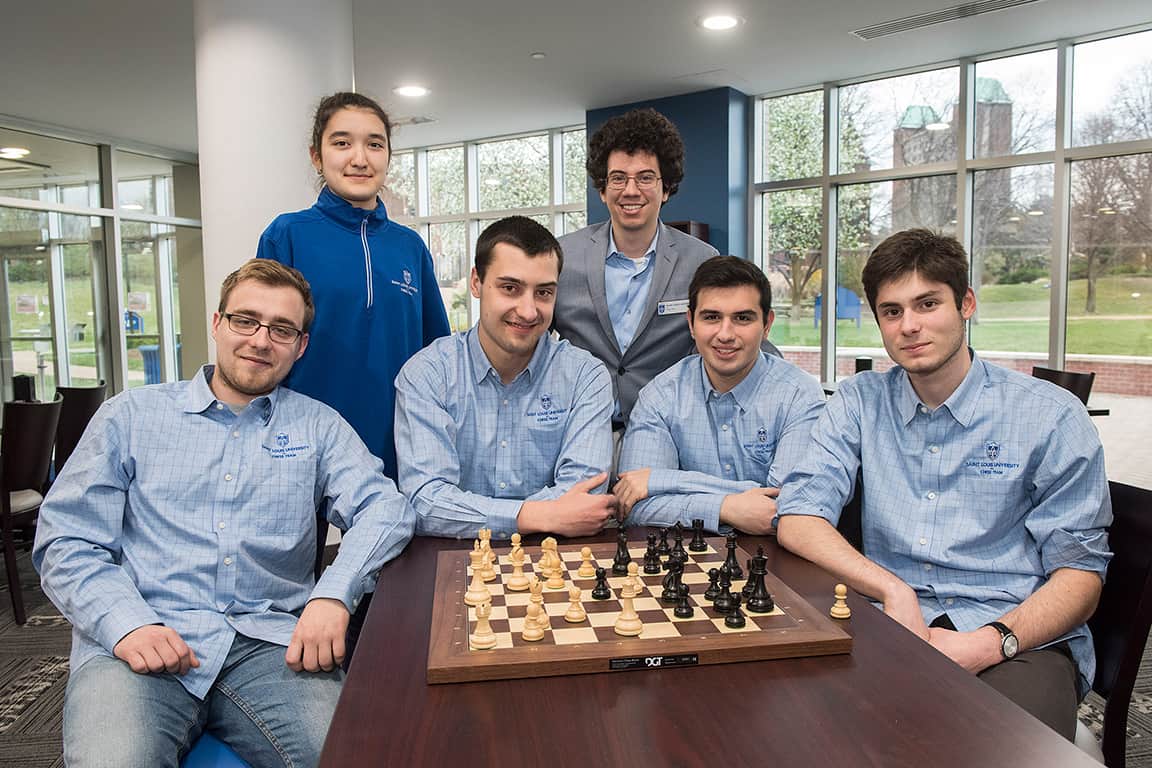 By any estimation, SLU’s arrival on the collegiate chess scene has been remarkable. Accidental? Not at all.

The chess program began as a strategic initiative of SLU administrators and alumni, in particular, chess aficionado and SLU trustee Rex Sinquefield (Cook ’67). Their goal was to build a competitive chess program at SLU, through thoughtful recruitment and donor-supported scholarships, to complement the University’s reputation for academic excellence. Chess has long been used as a tool for teaching problem solving, creative thinking and focus, and in recent years, more educators — from kindergarten to college — are embracing the game.

“The chess team is a great addition to Saint Louis University, attracting exceptional students from around the world,” Sinquefield said. “We all should be very proud of the team’s achievement in their inaugural year. For them to make the final four out of the 60 teams participating [in the Pan-American Collegiate Championship] and come in third overall in the Final Four is quite the accomplishment.”

Like Sinquefield, head coach Alejandro Ramirez is proud of what the team has accomplished in such a short amount of time.

“The effort has been great,” Ramirez said, acknowledging the commitment of the players, who balance academic expectations with demanding competition and travel schedules.

The search for top competitors to fill SLU’s roster has taken Ramirez around the world, and he’s recruited players at tournaments from Las Vegas to Reykjavik. The resulting team is not only highly accomplished but notably international as well. SLU’s players represent Italy, Poland, Turkey, Ukraine and Uzbekistan. Ramirez is originally from Costa Rica.

“Chess is a multicultural game,” he said. “It certainly adds to the experience, but sometimes we completely forget that we are from completely different parts of the world!”

Dariusz Swiercz, SLU’s strongest player and first board (a term akin to first chair in an orchestra), added that most of SLU’s players already knew one another, having competed in the same tournament circuits for years.

In assembling the team, Ramirez isn’t just seeking chess talent; he’s also looking for players who have what it takes to succeed academically in a university setting. To that end, the team’s undergraduate players are pursuing degrees in biology, economics, computer engineering and finance, while graduate student Yaro Zherebukh, the team’s second board, is working on a master’s degree in applied economics.

With interest in chess on the rise among U.S. colleges and universities, SLU’s nascent program stands out, and not only because of the team’s aforementioned achievements.

St. Louis has become an epicenter of global chess in recent years, and this is a big selling point for players considering SLU, Ramirez said, noting that St. Louis has, per capita, more chess grandmasters than any other city in the world.

But what makes SLU’s program particularly distinctive is its partnership with the Chess Club and Scholastic Center of St. Louis, widely recognized as the premier chess club in the country and one of the most distinguished in the world.

“There is no other college chess team program that offers players more playing, coaching and training possibilities,” Ramirez said. And no other collegiate team “is so close to, and in partnership with, the best chess club in the world.”

Top players on the global chess scene are absolutely taking note. Zherebukh jokingly called his path to SLU “inevitable.” A promising chess program combined with the University’s strong academics and beautiful campus? The decision was an easy one, he said. 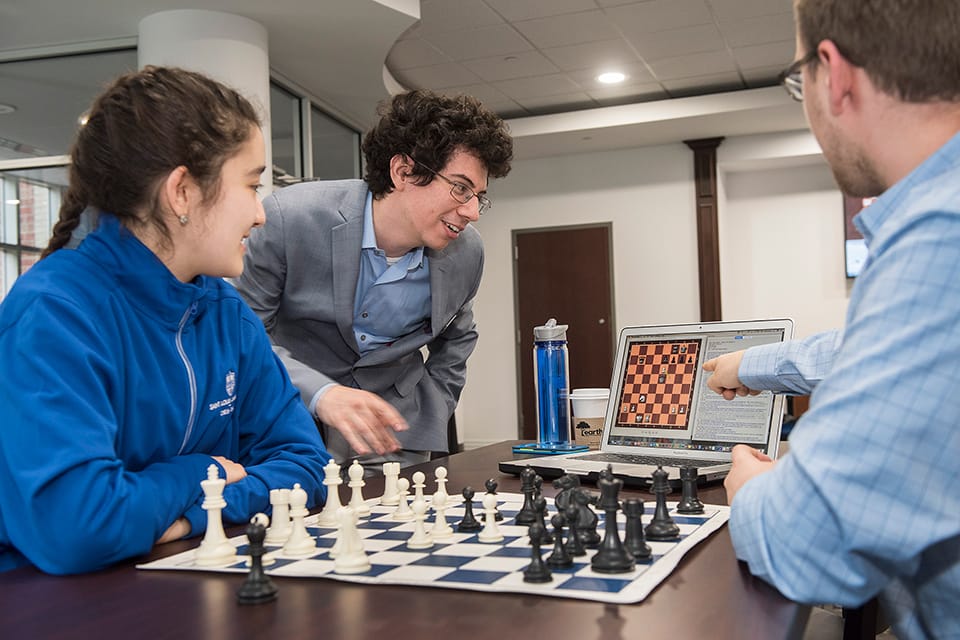 While it may seem like achieving No. 3 status in less than a year would be solid grounds for taking a well-deserved break, the Billiken chess team shows no signs of slowing down.

At the end of March, Zherebukh competed in the U.S. Championships, an invitation-only tournament open to 12 of the strongest players in the country. In May, Rambaldi will play in the French League championships, and Ali Marandi and Swiercz will compete in the European Chess Championship in Minsk, Belarus.

In addition to overseeing the current players’ intense competition and training schedules, Ramirez is focused on growing SLU’s team, which is still small by collegiate standards. One new player, Olexander Ipakov from Turkey, will join the team in June, and there are plans to add two or three more players in the fall.

The team’s headquarters in Morrissey Hall, where the players train while on campus, is also growing. An outdoor playing area, complete with a life-size chess board, will be ready for student use later this spring.