Inspired by a Saint Louis University English professor, a gift from philanthropists is empowering students and scholars to unlock hidden messages from the past.

Thanks to the generosity of collectors who prize rare books and a professor’s gift for nurturing a passion for the written word, Saint Louis University students will now find rare copies of books such as John Milton's political prose and the first folio edition of Ben Jonson’s Workes (1616) in Pius XII Memorial Library’s rare books collection. 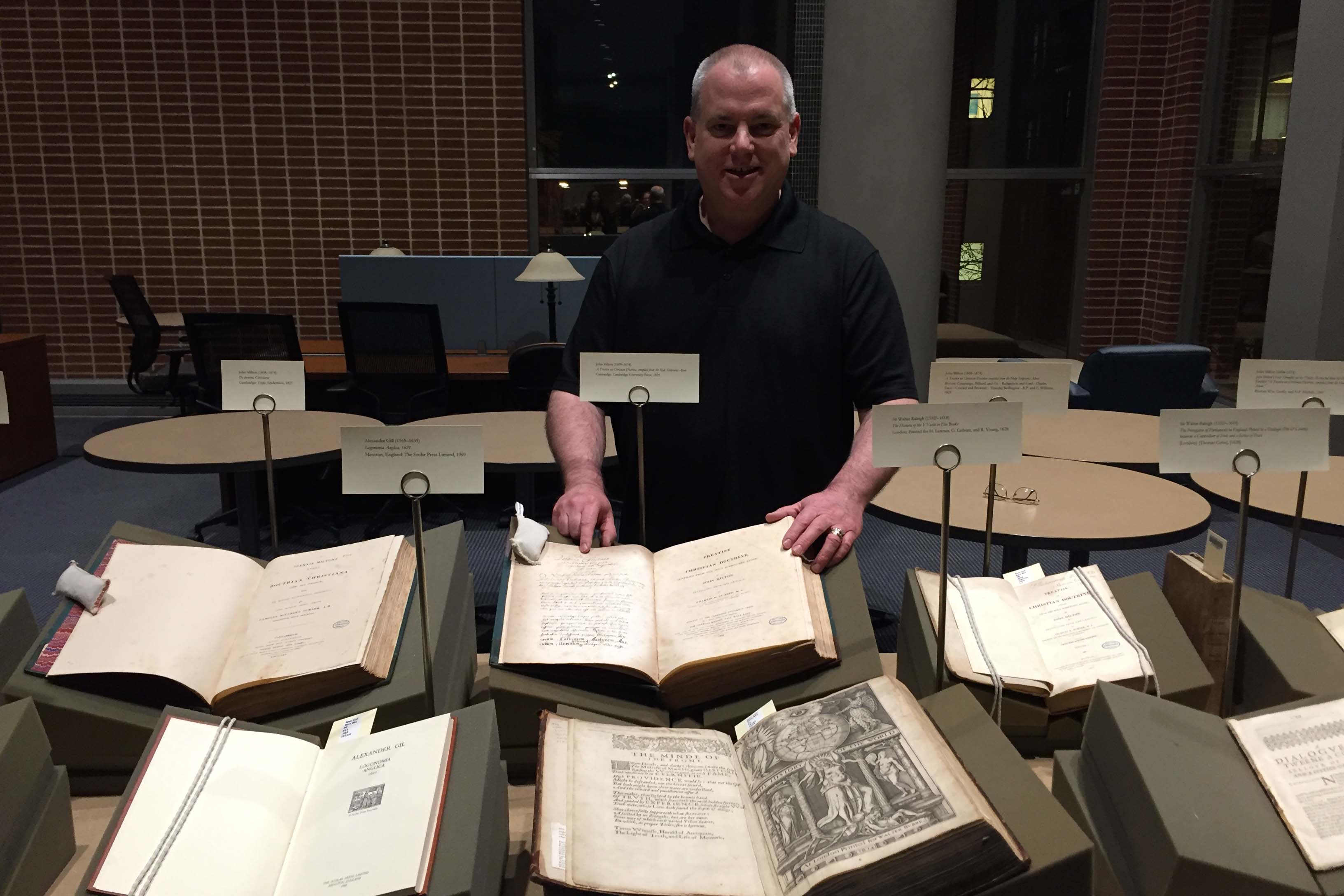 John Geraghty with the rare books he and his wife Melissa collected and donated to SLU.

Rare book collectors John and Melissa Geraghty have donated their collection of early-modern books, valued at more than $82,000, to SLU.

Formerly a student of SLU English professor Sara van den Berg, Ph.D., John Geraghty studied Shakespeare and Milton with van den Berg at the University of Washington, taking several undergraduate and graduate classes over the years. He went on to serve as a teaching assistant in one of her classes and asked her to chair his Master’s thesis committee.

“John and Melissa Geraghty have donated to us a remarkable treasure, the product of their own passion for early printed books,” said Jonathan Sawday, the Walter J. Ong, S.J., chair in the humanities at SLU.  “Thanks to their generosity we can add to SLU’s already remarkable collections of early printed books – one of the most precious assets that the University owns.

“But in one sense, we have only been lent these objects, since our task is to preserve them, and hand them on to future generations who will, quite probably, learn even more from them about our common past. For these are not dry, dead, musty, crumbling, relics or monuments. Rather, they are living testimonies.”

The Geraghtys’ gift has been divided over several years, and this year marks the second that SLU has celebrated the donation with a colloquium organized by the English department to bring distinguished scholars to campus. The Geraghtys plan to make another gift next year.

John Geraghty credits van den Berg with more than helping develop his natural affinity for books. In fact, she also helped him to land an internship at the company where he launched his career.

“I have always loved reading and been passionate about books,” Geraghty said. “Sara was by far the best English professor I have ever had the opportunity to study under.

“Sara recommended me for an internship at Microsoft and I eventually took a full-time job there in the early 1990s.  The company’s success allowed us to have the resources to begin collecting on a serious scale.  Our collection is focused on 17th century English literature, most of which came from hunting down and acquiring books listed from booksellers or from internet auctions.” 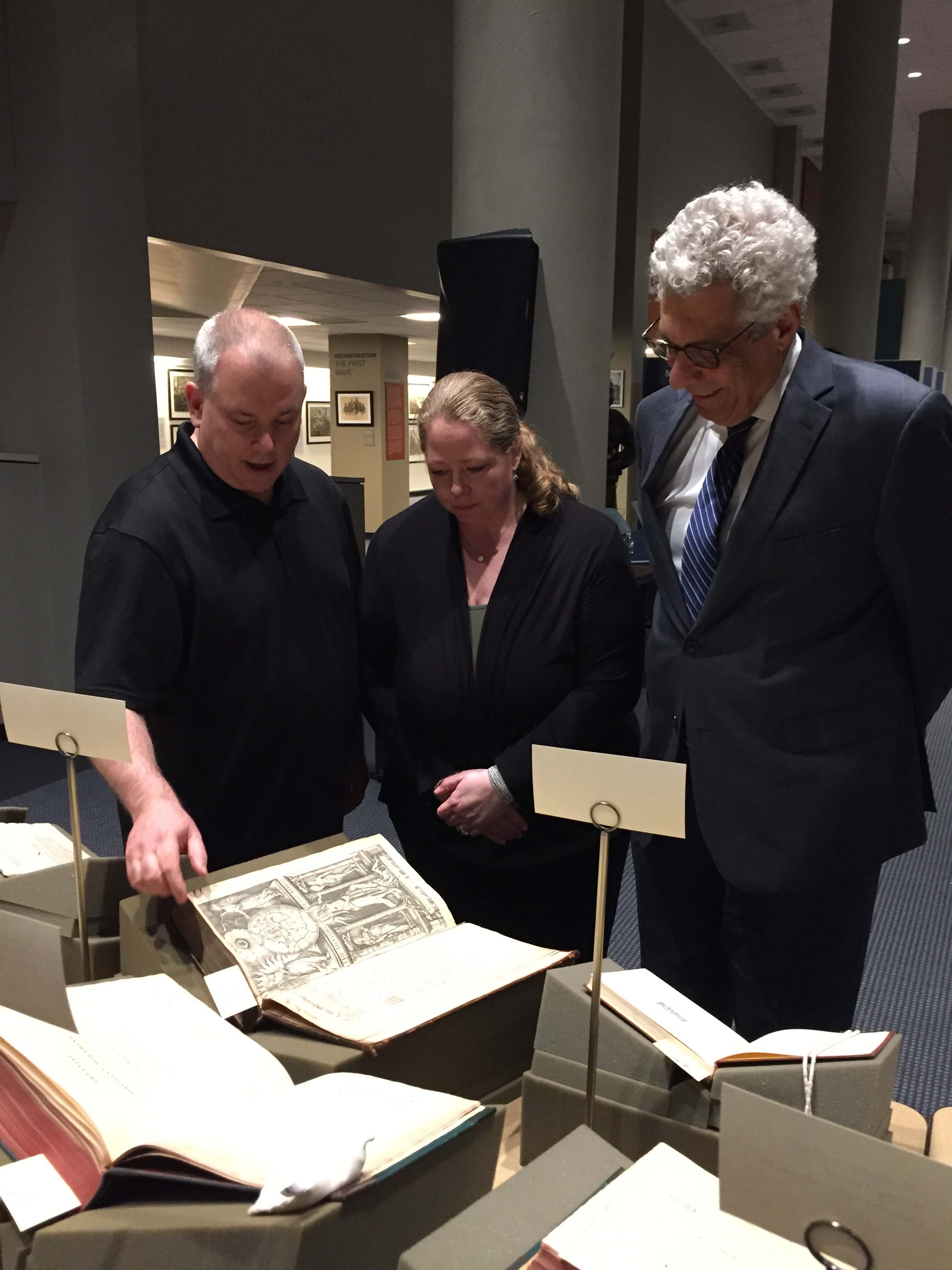 Geraghty sees his gift to SLU as a part of a larger legacy, continuing a family history of supporting Catholic causes.

“Our family has a long and committed relationship to Catholic philanthropy.  My great, great grandfather who came to America with almost nothing paid for the first parish priest to come to Rushville, Indiana, the town he first settled in. He later bought property there to serve as the first Catholic cemetery," he said.  “My decision was both a way to honor a great teacher and continue in the tradition of support for the Church that my family, who had nothing when they came to the United States, began in powerful and meaningful ways once they had the resources to do so.”

As a teacher, van den Berg is delighted to see that the love and appreciations of books she shares with Geraghty will be passed on to future scholars and students.

“It has been my privilege as a professor to help keep human ideas and voices alive, and these original books help form a community of learning that includes all those who read them,” van den Berg said.  “The gift of rare books by a former student links him to my current students and to future SLU students.

“As a teacher, I am thrilled to have these magnificent books at SLU. Seeing these original books helps my students erase the centuries and share the reading experience with the original readers. The feel of the leather covers, the look of early print, the lavish illustrations, and even in some cases the marginal comments by early readers enrich our understanding of the books we read.”

Jenny Lowe, rare books librarian at SLU, said she knows that this gift was given by a donor who himself appreciates the significance of the rare items.

“John Geraghty is a donor with a vision,” said Lowe. “He is intimately familiar with the books he has collected and given to SLU, and he sees how they can be used for teaching and research. We are very happy to help him promote this vision. It is a great benefit to SLU and a resource that will be available for generations of students into the future.”

The collection includes early printed English books, many of them dating from c. 1600 – 1700. An early edition of Sir Walter Raleigh’s History of the World (1628), a copy of the first folio edition of Ben Jonson’s plays, poems, and masques, known as his Workes (1616), and a copy of John Milton’s caustic attack on the idea of kingship, Eikonoklastes, are among the most recent items given to SLU.

“This is the age of Shakespeare, Donne, and Milton, but also of Hobbes, Locke, and Newton,”  Sawday said. “All of these rare and costly items are available for students, faculty, and visiting scholars to read within the rare books room.”

Many undergraduate and graduate students are slightly wary of rare items when they are first introduced to them, Sawday said, and they often take some time to become comfortable with old texts.

For many students, these are quite possibly among the oldest human artifacts that they have ever handled, which came into existence long before St. Louis existed, or before the United States was founded.”

“Students are, of course, used to reading words via the disembodied and decontextualized medium of the internet, or in the pages of a modern book,” Sawday said. “Using, and more importantly, understanding how an early printed book works can be quite daunting at first.

“They have to learn how to handle them, so that they are not damaged in any way. For many students, these are quite possibly among the oldest human artifacts that they have ever handled, which came into existence long before St. Louis existed, or before the United States was founded.”

SLU’s strength in Medieval and Renaissance studies is complemented by this gift, van den Berg notes, and the new collection will draw additional scholars and students to campus.

“Undergraduate and graduate students can do original research here, rather than travel to other libraries, and other scholars will come to SLU to consult these books,” van den Berg said. “SLU already had a large collection of early books, so these literary masterpieces are placed in their original context of Renaissance publishing and reading.

“SLU has always been an important center for Medieval and Renaissance studies, and this gift keeps Pius XII Memorial Library in the forefront of American research libraries. Only a very few universities can offer students and faculty the opportunity to see, touch, and read these books in the original.”

These books can be understood as storage mechanisms which have comfortably outlasted some of our more recent data storage techniques: floppy disks, magnetic or paper tape, and punched cards, Sawday says.

“The fact that the book, considered as a means of archiving data, manufactured four or five hundred years ago still “works” and can be used by a SLU student just as it was used by an Elizabethan reader, is, itself, remarkable."

Retrieving Messages From the Past

“In a very short space of time, the students learn to look behind or beyond the words on the page, to retrieve these hidden messages from the past, revealed in such elements as the faintly discernible water marks and chain lines impressed into the fibers of the page by the paper manufacturing process," Sawday continued.

"In this way, too, they learn about pre-modern manufacturing processes, and something of the extraordinary skill with which the mostly anonymous craftsmen and craftswomen assembled these objects. They learn to look at the annotations left by previous generations of readers, or marks of ownership, which can tell us a great deal about how a book circulated among readerly communities in the past.”

Finally, Sawday shared Milton’s own words about the way in which these books continue to live.

“In his attack on press censorship, published in his Areopagitica in London in 1644, the great poet and revolutionary, John Milton, wrote that “books are not absolutely dead things, but do contain a potency of life in them to be as active as that soul was whose progeny they are,” Sawday said. “And he went on to describe how a book is ‘the precious life-blood of a master spirit, embalmed and treasured up on purpose to a life beyond life, they do preserve as in a vial the purest efficacy and extraction of that living intellect that bred them’.

“Milton’s metaphors of life, spirit, and potency seem never to me to be truer than when I watch one of my students opening the pages of an early printed book, and beginning, quietly, to read.”

Who can see these books?

SLU students, faculty and alumni can access the books, but also visiting researchers. Anyone who wishes to see them are welcome.

Many images from the Rare Book Collection can be viewed through the Rare Book Image Bank—  http://digitalcollections.slu.edu/digital/collection/imagebank.

What should people know about rare books at SLU?

The Rare Book Collection is part of Special Collections in the Saint Louis University Libraries. It consists of about 30,000 volumes, ranging from the fifteenth to the twenty-first centuries. Its strengths lie in Jesuitica, Church history and theology.

Special Collections is not a “lock-up” for rare books and manuscripts deemed too valuable to allow anyone to touch. Its materials are valuable and do require special care and handling— which is why they are not shelved in the open stacks and are used only in a monitored reading room — but their primary purpose is to be used for learning and research.

A rotating exhibit highlighting items from Special Collections can be seen in a special exhibit case on the first floor of Pius Library. Items rotate about every two weeks.

Are there opportunities for the SLU community to view the collections?

The Rare Books Reading Room is normally open from 9 a.m. to 1 p.m, Monday-Friday. People are free to drop by or to make an appointment. Also, check out the exhibition case on the first floor of Pius XII Memorial Library.