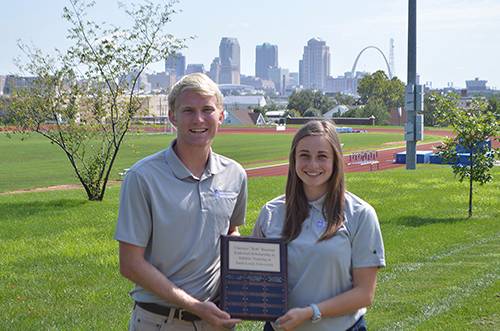 Peterson is a native of Shadow Hills, California, and serves as the president of the Alpha Iota Chapter of Iota Tau Alpha (the national athletic training honor society), a member of SLATS and is a peer mentor in the Study Abroad office at Saint Louis University.  In addition, Peterson represents Saint Louis University’s Doisy College of Health Sciences as one of seven students on the founding leadership group of a new chapter of the Association of Schools of Allied Health Professions (ASAHP).

Bob Bauman, for whom the scholarship is named, passed away in 1999 after helping take care of Saint Louis University athletes for more than 50 years (1928 - 1979); his hard work and dedication earned him a place in the Billiken Hall of Fame. Bauman's work was not limited to Saint Louis University; he also served as an athletic trainer for the St. Louis Cardinals for nearly 50 years. Bauman passed away nearly two decades ago, but his influence and legacy is still felt by the University’s athletic training students today.

Bob Bauman paved the way for athletic trainers in St. Louis with his dedication and compassion for his community."

“The thing I find most influential about Bob Bauman’s career is how much he gave back to the profession that he loved,” Peterson said. “I try to emulate his actions by being an active leader in our Athletic Training Program here at SLU so that it may continue to thrive and grow.”

“Congratulations to Amelia and Collin; they are the most deserving recipients of this honor,” Breitbach said. “I am very confident they, as health professionals in athletic training, will live out Doc Bauman’s legacy of dedication, professionalism and clinical excellence.”

Learn more about the Doisy College of Health Sciences and its programs here.