Saint Louis University (SLU) Health Information Management Instructor Julie Howe, MBA, D-ABMDI, was recently awarded the John R. Hunt Award by the American Academy of Forensic Sciences (AAFS) – an organization dedicated to advancing forensic science and its application to the legal system - at the organization’s annual meeting in Seattle, WA. The John. R. Hunt Award recognizes sustained superior contributions to the AAFS and the forensic science community. Howe was chosen from over 850 members of her membership section (General Section) of the AAFS to receive the honor. 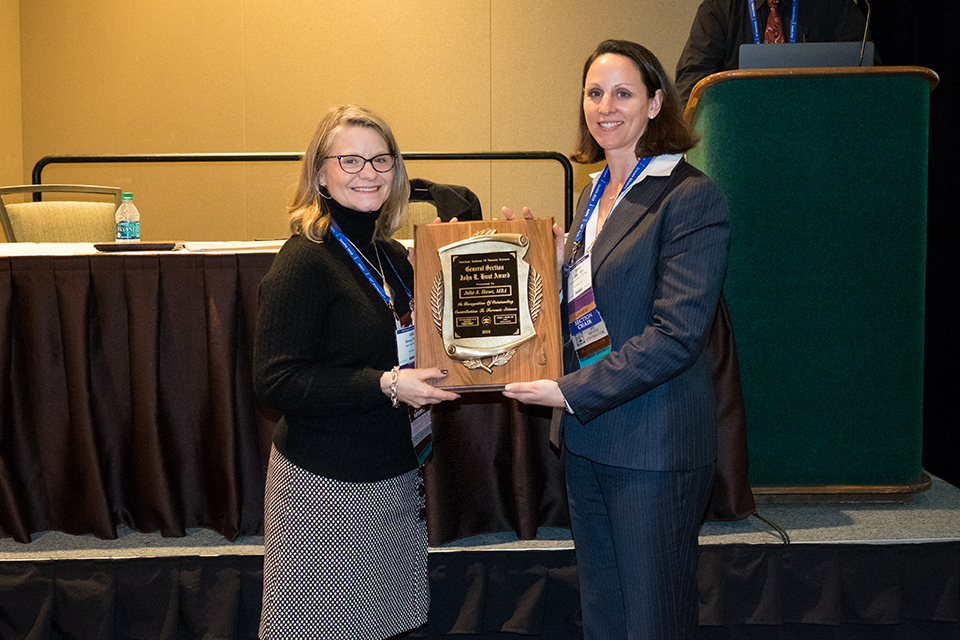 In addition to teaching Health Information Management at SLU, Howe has also been a medicolegal death investigator for 18 years, which has earned her an impressive background in forensic science. After the release of the National Academy of Science’s (NAS) 2009 report regarding the state of forensic science, Howe and other forensic professionals recognized the need to develop nationwide forensic standards for practicing forensic professionals. Howe was elected to the AAFS Academy Standards Board (ASB) to work towards that goal. It is partially for her diligent work with other members of the ASB developing these standards that Howe was chosen to receive the John R. Hunt Award.

“Our goal is to have forensic standards on a federal registry so medical and legal authorities can work together to drive forensic science forward,” Howe said.

Howe’s recent work includes helping to develop a national case management system to collect uniform information on a death certificate that would allow the Centers for Disease Control and Prevention to access timely information to help drive public health initiatives. This is only a small part of her contribution to the AAFS and the forensic community. Howe has chaired or served on 12 different AAFS committees, presented over 20 peer-reviewed studies at national and international levels, published four peer-reviewed manuscripts and two book chapters, served as a team leader for the National Institute of Justice (NIJ) Missing and Unidentified Persons System Training Academies, helped create and conduct conferences to teach high school math and science teachers how to incorporate forensic science into the classroom, and much more.

After taking all of these accomplishments into account, the AAFS General Section Awards Committee selected Howe as the recipient of the 2018 John R. Hunt Award – an award that can be given annually, but does not necessarily get awarded every year.

Howe was both thrilled and taken aback when she heard that she had won the prestigious award.

“I am very surprised and humbled to receive the John R. Hunt Award,” Howe said. “There are many forensic professionals who are deserving of the award, so it means a lot to be the recipient.”

As an instructor of Health Information Management at SLU, Howe is a faculty member in the Clinical Health Sciences (CHS) department. CHS Department Chairperson Amy Harkins, PhD, was not at all surprised to learn that Howe had received such an award.

“Julie is most deserving of such a recognition, as her scholarly work and passion for forensic science and how it meshes with health information management is clear in her dedication to her courses, her students, and the program,” Dr. Harkins said.

Find out more about the SLU Health Information Management Program.