Saint Louis University’s Doisy College of Health Sciences recently announced the establishment of the college’s first endowed professorship. The Sr. Mary Imelda Pingel Endowed Professorship in Physical Therapy was generously made possible by a $500,000 gift to the college from an anonymous donor. 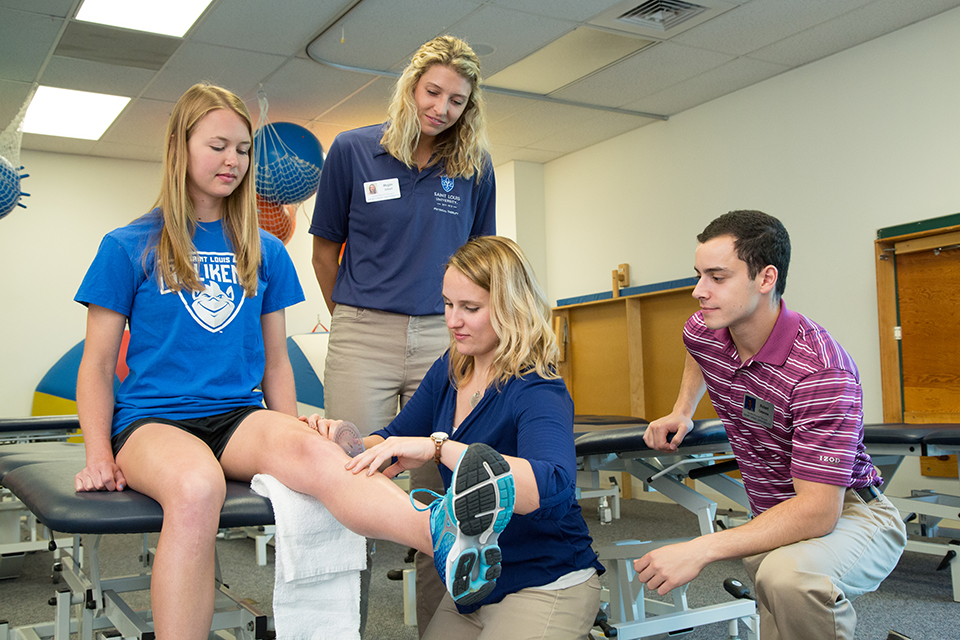 Physical therapy students practice the techniques they learn at SLU. A new endowed professorship, the first in college history, honors the legacy of innovation and educational rigor that has been the program's hallmark since its founding in 1933.

Pingel, a Franciscan Sister of Mary, became the director of the physical therapy  program after earning her bachelor's degree in physical therapy in 1942 and pursuing clinical work at the Firmin Desloge Hospital - now SSM Health Saint Louis University Hospital. While working in the clinical setting, Pingel treated patients suffering from polio and opened a cerebral palsy and rehabilitation center. She would go on to earn a master's degree from SLU in 1969 and served as chair until 1977. During her years at SLU, Pingel wrote Physical Therapy at Saint Louis University - History and Memoirs.
Pingel died at age 95 in 2006 and colleagues credited her with laying the foundation for the program's success.

Department of Physical Therapy and Athletic Training Chairperson Tricia Austin, PT, Ph.D., ATC, was excited to learn of the investment in the department which continues its commitment to support and nurture an intellectually rigorous and ethically sound academic community.

“We are most honored and humbled to receive this generous gift,” Dr. Austin said. “It is a time of excitement and gratitude, particularly as we celebrate our university’s 200-year history.”

Dr. Austin went on to explain some of the great advantages the new professorship will offer the department.

Doisy College of Health Sciences Dean Mardell Wilson, EdD, RD was excited for the opportunities that gaining an endowed professorship would mean for both the program in physical therapy and for the college itself.

“Securing the college’s first endowed professorship is a wonderful testament to the fantastic work being done in the Program in Physical Therapy,” Dr. Wilson said. “Thanks to the remarkable generosity of this donor, we will be able to further elevate the profile of our college as we continue to advance research and its impact on the discipline and those we serve.”

Find out more information about SLU’s Program in Physical Therapy