Saint Louis University (SLU) graduate student in the Program in Physical Therapy Christina Vivit was recently named the recipient of the Association of Schools of Allied Health Professions (ASAHP) Elwood Scholar Award. As the recipient of this award, Vivit was awarded a letter from the ASAHP, a certificate of achievement and $2,000 of scholarship money. 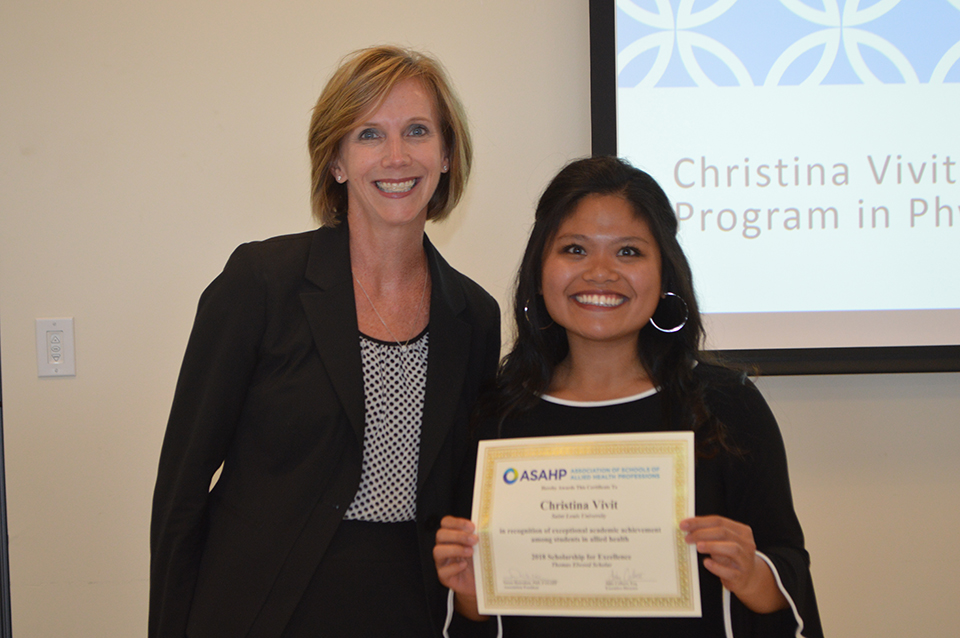 DCHS Dean Dr. Mardell Wilson presenting graduate student in the Program in Physical Therapy Christina Vivit with her Elwood Scholar certificate from the Association of Schools of Allied Health Professions.

Vivit was happy to learn she had been selected as this year’s Elwood Scholar, and was even more excited that this recognition was, in part, for passions that she has developed while working towards her degree.

“I was humbly surprised to find out I was the recipient of the Elwood Scholar award,” Vivit said. Sustainability through community health education has been a growing passion of mine throughout the past couple of years in the DPT program, and to be recognized for my community and academic involvement is quite the honor.”

Vivit also acknowledged that her education in the Doisy College of Health Sciences (DCHS) at SLU has been an instrumental part of making her the allied health professions student that she is today and positioning her to have the opportunity to earn such a prestigious honor.

“Aiming to understand one’s community and patients in the most holistic way has been a constant theme in what DCHS promotes to its students,” Vivit said. “Furthermore, evidence-based practice has been a standard set for the entirety of students as this is an essential component to practicing as an allied health professional.”

Doisy College of Health Sciences (DCHS) Dean Mardell Wilson, Ed.D., RD, LDN, was thrilled that the winner of such a prestigious award came from a program within DCHS.

“I can speak for the entire DCHS community when I say we are extraordinarily proud of Christina earning the Elwood Scholar award,” Dr. Wilson said. “For the ASAHP to select Christina as the sole recipient of this national honor among so many talented and worthy students from across the country, truly reflects not only what an exceptional student she is, but also the talented faculty that have helped guide her through her through her journey at SLU.”

Vivit will be invited to the 2018 ASAHP Annual Conference in St. Petersburg, FL in October where the award will be formally presented.