In the face of scrutiny from her home chess federation and others, one young woman’s message of valuing freedom of choice and determination to chase goals inspires on an international stage.

“I was the second-highest-ranked player for girls under 18 in the world in 2016. I am the second-highest ranked female chess player in Iranian history. And yet my passion for the game has taken me thousands of miles away from my home in Tehran to seek citizenship here in the United States.”

Dorsa Derakhshani appreciates the stability and the structure she has found in her life at Saint Louis University (SLU). As a double-major in Health Sciences and Biology with a minor in Healthcare Ethics, there are plenty of classes to fill most of her days. After taking an hour to herself after classes end, she heads to the library to study and do homework and then heads next door to the rec-center to work off the stresses of the day. Most of the free time she has from her academic routine, she spends training for or competing with SLU’s chess team, which is one of the nation’s best collegiate chess teams. She has settled into a nice routine.

The appreciation for this stability by the Iranian-born International Master and Women’s Grandmaster chess player, however, just might stem from the unique, and sometimes tumultuous, path that has led Derakhshani to this point.

Growing up in Iran’s capitol city of Tehran, Derakhshani was learning to read by the age of one and was introduced to chess as soon as she could talk. Her parents introduced the game to her as a learning tool, something to encourage the growing mind of a young child. Derakhshani’s parents then began homeschooling her and, by the age of four, she had completed the equivalent of a fourth-grade education. The problem was that this was such a rare feat, the government did not have any protocols in place for such a situation; they allowed her to start school early, but only let her start at the first-grade level.

To this point, Derakhshani had always viewed chess as mostly a hobby, but now finding herself constantly bored and unchallenged in school, this was when she decided to really dive into the competitive world of the game she loved. It did not take long for Derakhshani to find success in competitive chess.

“I started to view myself as a competitor,” Derakhshani said. “The idea of formulating a strategy and planning against an opponent’s next moves started growing on me.”

She quickly began winning competitions and within a short time of beginning her career, she won the Iranian National Champions in the Under 8 Division. Quickly, her accolades started piling up – she was climbing up the female ranks in Iran, she had won the Asian Youth Chess Championship three times and had achieved every women’s title (including Grandmaster) that she could, but she still wanted more. She wanted to compete against the men.

An advocate for gender equality, Derakhshani explained how in chess, as opposed to other more physical sports, everything should be equal.

“Biologically, nothing is different; there is nothing biological that dictates a woman cannot play chess on the same level as a man,” Derakhshani said. “Society’s expectations for women may be different, or there may be a lack of interest in chess among women, but there is nothing physically stopping women from competing with men at chess. I don’t want to be satisfied with only women’s titles.”

Derakhshani compared women competing against men at chess to an everyday visit to a doctor’s office if a person was sick.

“If you go to the doctor, you aren’t worried about whether than doctor is male or female, you just want someone who can make you feel better,” Derakhshani said. “If we can trust females to be doctors, surely there is nothing to prevent females from competing with males in chess.”

This progressive style of thinking was not embraced by everyone in Derakhshani’s home country of Iran, so she began to draw some unwanted scrutiny from her home chess federation. After being reprimanded for her wardrobe choices on multiple occasions, along with other contributing factors, Derakhshani made the decision to quit playing chess for her home federation. At that time, her parents supported her on her decision to move to Spain and travel around Europe competing at various chess events.

While competing throughout Europe, Derakhshani did not abide by the strict dress code that was required when she played for Iran; she did not wear a hijab and, instead, left her hair uncovered. Derakhshani used her wardrobe as a means of self-expression. In early 2017, the Iranian federation cited her for not wearing a hijab in a particular competition and officially barred Derakhshani from competing for Iran in the future.

Having already been playing for over a year independently, Derakhshani was already looking to the future and exploring scholarship opportunities in the United States. While she knew she would miss her parents and her home in Tehran, she was excited to continue her education and her chess career in a new home. Derakhshani had numerous scholarship offers on the table, but ultimately decided on SLU because she liked the medical school and campus, the university had a highly competitive chess team and because of St. Louis’s reputation as a chess hub in the United States.

Derakhshani was quickly reassured that she made the right decision to come to SLU as she took to the university right away.

From a young age, Derakhshani knew she wanted to be a surgeon. As a Health Sciences and Biology major on a Pre-Med track at SLU, she has been able to begin her journey towards making those dreams a reality.

“I have always wanted to be able to fix things and be able to help people. What better way to accomplish both of those than becoming a surgeon?” Derakhshani said.

As she started interacting with doctors more frequently throughout her education, she began to realize that she shared those goals with many others in the health care field.

After excelling in her first two years at SLU, Derakhshani was presented with a unique opportunity in the summer of 2019. Someone that was familiar with her story and who had connections with Ted Foundation encouraged her to give a TedxTalk. Derakhshani was excited about the opportunity and, in a stroke of good fortune, had just finished a class at SLU that spent time studying various Ted Talks, so she was familiar with the format. The only real question would be: what would she talk about? 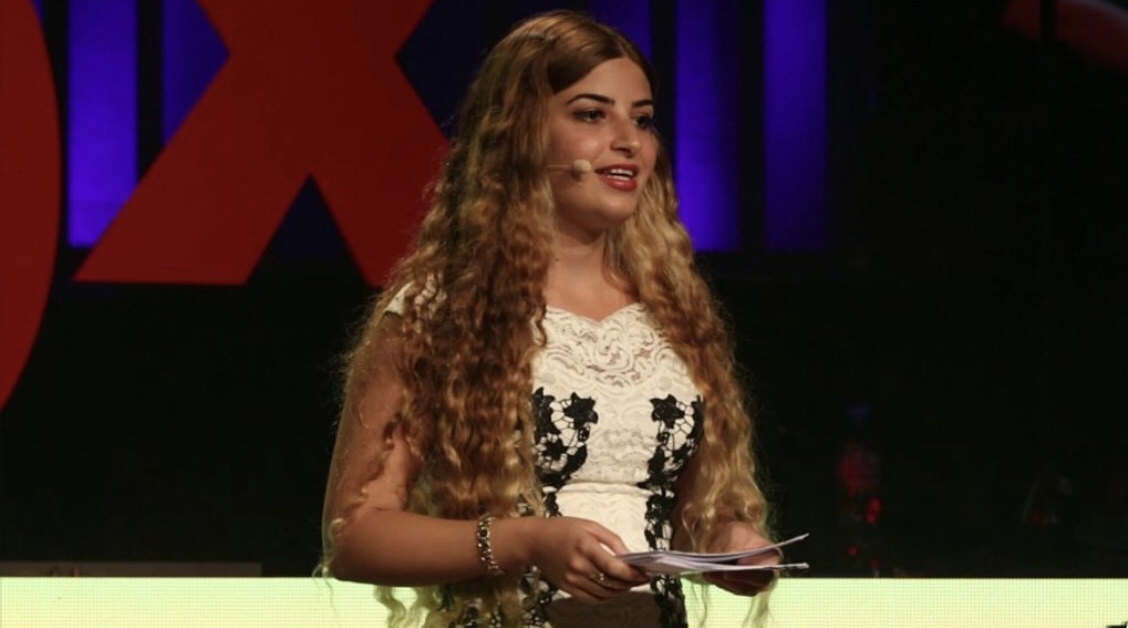 Right away, Derakhshani knew the answer to that question. With the challenges she faced with restrictions from her home country and as a woman in a male-dominated sport, she wanted to address the topic of freedom of choice and challenge gender assumptions that often exist, especially in traditionally male-dominated fields.

“I knew what I wanted to talk about right from the start,” Derakhshani said. “In the United States, freedom of choice is viewed as a human right, so it can be taken for granted at times. I think it is always good to remind ourselves that our choices are our own.”

“In some areas of the world, even sometimes in the U.S., different opinions are not always welcomed. We need to remember that respectful criticisms are how we make things better,” Derakhshani said.

Derakhshani’s TedxTalk touched on her childhood in Iran and her journey to quickly rise in the international chess rankings, but then also talked about the societal pressures and expectations she has faced as a woman both in everyday life and in her chess career. Derakhshani did not believe there was any scientific evidence to suggest that males should be expected to perform any better than females at complex tasks like surgery or chess or even basic tasks like driving. Not wanting to make any assumptions herself, Derakhshani sought out the opinion of multiple neuroscientists on the issue and they confirmed her thought that there is nothing biological that sets one gender up for critical thinking success more than another.

By the end of her talk, Derakhshani wanted to leave the audience with the idea that decision-making is important and personal and that a person’s choices are their own to make. They should not let outdated assumptions on gender norms stand in their way.

Derakhshani has lived her young life on her own terms – ever grateful for the support of her family and her teammates, but her choices remain her own. Whether through her TedxTalk or just through the way she lives her life, Derakhshani hopes to inspire others to stay true to themselves.

“Be yourself,” Derakhshani said. “Don’t be a people-pleaser. Make priorities and have a support group that will help you grow. In America, there is nothing a girl can’t do, so stay true to yourself.”

She may be thousands of miles from home, but, rest assured, Dorsa Derakhshani is exactly where she wants to be.