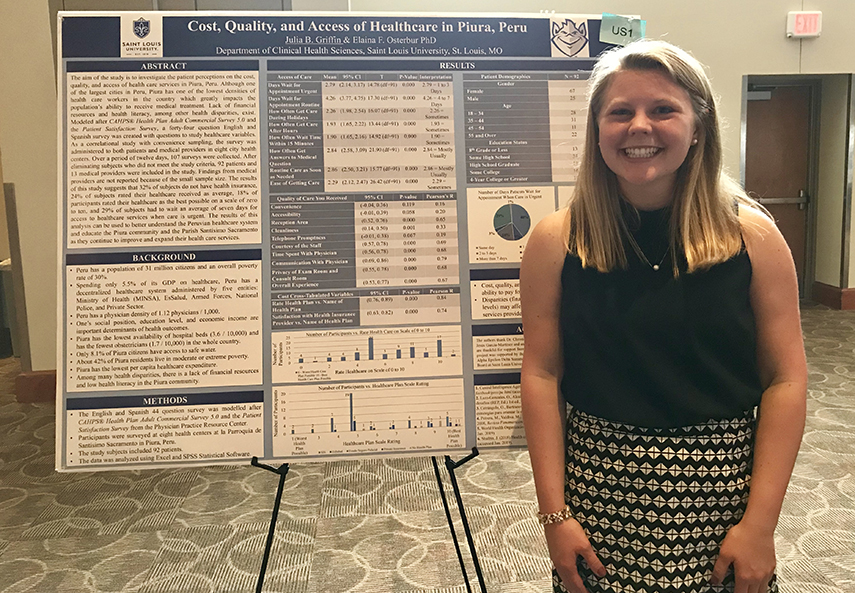 Sigma Xi Scientific Research Honor Society was founded in 1886. The society has more than 500 chapters in the world; the SLU chapter was founded in 1944. Individuals who have presented or published their work, including participants in the Sigma Xi Research Symposium, are eligible for membership.

While Griffin was thrilled to earn second place in her division of the Sigma Xi Research Symposium, her project took a far-from-traditional route to the podium. As a Health Sciences and a Spanish major with a strong interest in service and medicine, Griffin wanted to embark upon a project that integrated all of her passions.

“With no prior research experience on the topic, I was the Principal Investigator (PI) on my Institutional Review Board (IRB)-approved project,” Griffin said. “I conducted the project alone in Peru for six months and the whole project was in Spanish.”

While she might have been on her own in Peru, she credits her faculty mentor, Health Sciences Assistant Professor Elaina Osterbur, Ph.D., for being an invaluable resource back in the United States.

“With the unconditional support and guidance of Dr. Osterbur, I decided to complete an independent research project analyzing the cost, quality and access of healthcare in Piura, Peru (an impoverished community),” Griffin said. “As the PI, I developed a recruitment statement and a 44-question survey from two national surveys with questions assessing these variables.”

Dr. Osterbur has mentored students on research projects previously, but said the nature of this project did have a couple interesting obstacles.

“The only real challenges we faced regarding our interaction during the project were those related to time zones and internet access,” Dr. Osterbur said. “During her first week in Peru, we set up specific times to talk person-to-person. Because of the limited internet access in combination with the time zone differences, getting email answers to Julia’s questions and vice versa was challenging.”

Griffin stayed in Piura for six weeks. Over that time, she surveyed 105 medical providers and patients in eight different city health centers – conducting all communication entirely in Spanish. When she was not working on her research, Griffin was working as a missionary to help the people of Piura.

“I stayed at a parish in Piura and acted as a summer missionary. Working full days, I served the Piura community in a variety of ways through the Parish of Santísimo Sacramento,” Griffin said. “I worked in the community delivering clothes or food parcels, building houses, assisting farmers with their crops or cleaning the orphanage.”

After returning from Peru, it was time for Griffin to start the lengthy work of putting together a research article about her findings.

“Dr. Osterbur encouraged me to write an article and publish my findings. We completed all statistical analysis before I wrote the 23-page document, which is currently under review at the American Journal of Undergraduate Research,” Griffin said. “I have now presented my research at the Saint Louis University Learning Community Symposium, the Presidential Scholarship Interview Weekends and the Sigma Xi Research Symposium. I will be traveling to New Orleans in November 2019 to present my research at the National Collegiate Honors Council Conference.”

“Julia’s success has made me proud,” Dr. Osterbur said. “She has earned this recognition based on the uniqueness of the study, her drive for excellence and outstanding listening skills. I think we made a great team.”

Griffin already has plans to continue her work on this project in the future. For her senior capstone project this upcoming school year, Griffin plans to work with her Spanish professor, Dr. Christina Garcia, to translate her manuscript and send the results back to the Piura community. 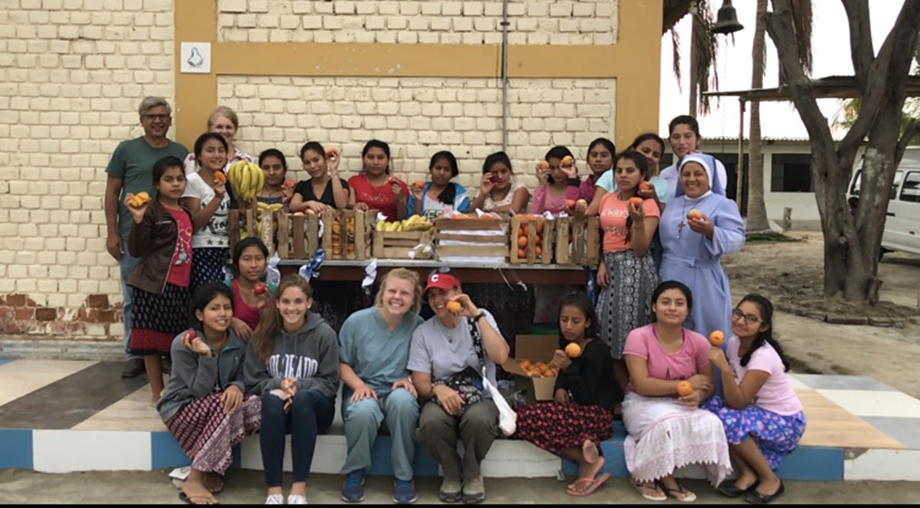 Julia Griffin with some of the residents of Piura, Peru.

To cap off this stage of her research with a second place showing at the Sigma Xi Research Symposium, Griffin described as an honor, humbling and very rewarding. She was extremely grateful to Dr. Osterbur, her reviewers, study participants, the Parish of Santísimo Sacramento and her constant supporters for their contributions. When looking back at the work that she has done so far, Griffin could truly describe the experience as life changing.

“What initially started as an independent project, has become the most challenging and formative experience of my undergraduate career. With no prior research experience, I conducted a project in Spanish, independently, in a foreign country. I learned about the complex process of research, the ethical considerations of applying to the IRB and methods of how to correctly analyze data. Although conducting the entire project in Spanish was a challenge, I also greatly improved my Spanish skills,” Griffin said.

“Through surveying medical providers and patients, I strengthened my patient interaction skills and learned how to effectively communicate,” Griffin went on to say. “My weeks in the health clinics provided me with unique perspectives, as I observed how various health institutions operate. I became more culturally competent by interacting with a diverse population and more educated about the Peruvian healthcare system. Through this incredible experience I have grown so much as an individual, student, leader, Billiken and aspiring physician.”