Saint Louis University (SLU) Physician Assistant Education (PA) students formed a group to participate in the Out of the Darkness Walk – a fundraising walk to support suicide prevention – at Creve Coeur Lake Park earlier this fall. The PA students recruited other DCHS faculty and staff members to join their fundraising team. This is the third year PA students have participated in the event; they walk in memory of a PA student that was lost to suicide in 2016. 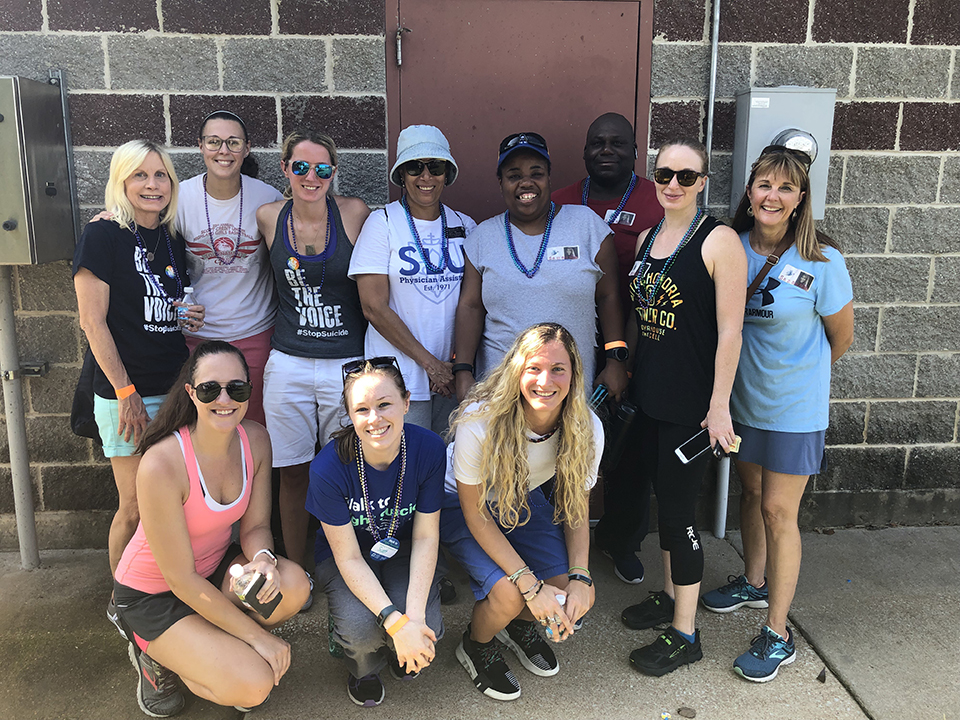 A group of DCHS students, faculty and staff at the Out of the Darkness Walk to Support Suicide Prevention

The money raised for the event goes to the Eastern Missouri branch of the American Foundation for Suicide Prevention (ASFP), which provides help, education and resources for people struggling with mental health. In 2018, Missouri moved to the 13th highest suicide rate in the country. The Out of the Darkness Walk draws thousands of participants each year who are looking to help those struggling with thoughts of suicide by helping them gain access to adequate mental health resources and by letting them know that people care about them.

SLU PA student Katie Shewmon was one of the students that organized the DCHS participants who joined the fundraising team of the late PA student’s family, and she was proud to walk in memory of her former classmate and to help all people affected by suicide.

“By showing our support in the simplest way possible, we were able to be there for her family during this hard time and honor the memory of [our friend] and show that she will never be forgotten,” Shewmon said. “By participating in the walk, it allowed us to show support for all of the families that have lost loved ones and to stand up in prevention of suicide and aid in raising awareness.”

In addition to the walk, there was a photo wall of loved ones lost to suicide, testimonies given by individuals whose lives had been affected by suicide and other activities to help remind participants of the importance of the cause. Shewmon felt very moved by these aspects of the event.

“It was extremely humbling, devastating and eye-opening to walk around and see pictures of all of the lives that have been lost. To witness all of the people hurting, all of the tears and wounds that will never be completely healed due to the loss they have encountered,” Shewmon said.

In 2018, the Eastern Missouri AFSP Chapter Out of the Darkness Walk raised over $30,000 for suicide prevention, and event organizers hope that, after the totals are finalized, they will have increased that number this year.

Learn more about, or donate to, the American Foundation for Suicide Prevention.