In the suburbs west of Chicago, IL, in the town of Lombard, you will find Montini Catholic High School. This private high school of about 600 students has all of the classes, clubs and regular activities you would come to expect from a high school in the Midwest – which certainly includes sports.

With 22 official sports teams and three club sports teams, the Montini Broncos have their fair share of student-athletes to keep strong and healthy, and from 2016 – 2018, that responsibility fell on Head Athletic Trainer and Saint Louis University Athletic Training alum Connor Doherty, MAT, ATC (Class of 2015).

“At Montini Catholic High School, my daily responsibilities focused on working with all of our student-athletes on injury prevention, immediate injury care and evaluation, rehabilitation and return to play,” Doherty said.

While the day-to-day tasks of an athletic trainer can certainly be unpredictable, Doherty enjoyed this traditional athletic training role, but Doherty also worked with another, less traditional, team – the United States Paralympic National Soccer Team (USPNT), which would provide him with opportunities to help athletes far beyond the suburbs of Chicago.

In the summer of 2018, Doherty was invited to be one of the athletic trainers for the USPNT when they competed in the 13th International Trophy CP Football Tournament in Barcelona, Spain. The USPNT would compete against Paralympic national teams from Argentina, Denmark, Scotland and other countries. Doherty had worked with the team previously, which helped earn him this opportunity to work with the team in Barcelona. 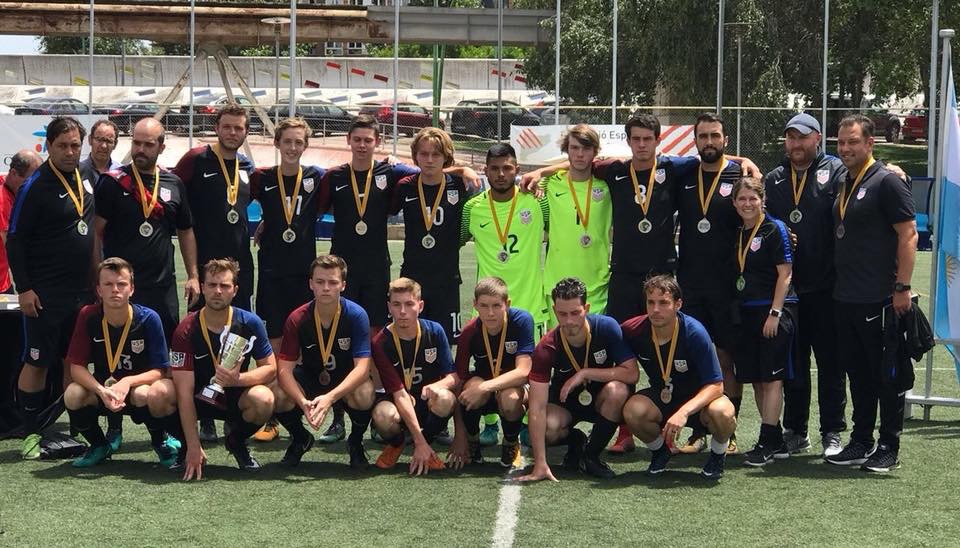 “I worked for Athletico Physical Therapy, who is a partner of US Soccer and helps provide athletic trainers for camps and tournaments for some of their teams,” Doherty said. “In past summers, I have worked camps for the U-16 Boys Team and for the USPNT.”

Athletes can only compete on the USPNT if they have previously had a stroke, have cerebral palsy or have had a traumatic brain injury that continues to impair them. Despite the symptoms brought on by their conditions, Doherty said working with the USPNT is, for the most part, just like working with any other highly competitive athletes.

“Overall, there isn’t much of a difference between working with the USPNT or a more traditionally-abled team. The USPNT plays seven-on-seven with a slightly smaller field and a few adjusted rules, but if you are just watching them play, it is difficult to tell that they have any impairments at all.”

The team that traveled to Barcelona for the tournament was a very youthful and inexperienced one; however, they battled hard throughout the competition and took second place, falling to a more seasoned Argentinian team in the finals.

“The highlight of the tournament for me was just how hard the team played against Argentina in the final. Even though Argentina was older, bigger and more experienced, we still fought hard the whole game,” Doherty said. “Also, it was awesome exploring Barcelona for the first time; I was never able to visit when I studied abroad in Madrid during my time at SLU.”

It was that time at SLU that Doherty believes truly set him up for a successful career as an athletic trainer.

“My education from Saint Louis University definitely set me up for success. All of the professors in the Athletic Training program positioned us to succeed professionally and are always our biggest supporters,” Doherty said.

Not long after returning home from Barcelona, Doherty’s experience with the USPNT opened the door to a new professional opportunity, and he accepted a new position as Athletic Trainer for Adapted Athletics at the University of Illinois at Urbana-Champaign in the fall of 2018. In this position, Doherty works with Wheelchair Basketball and Wheelchair Track/Marathon athletes.

“Getting to meet all of the athletes here has been great. We have around 45 athletes between basketball and track,” Doherty said. “It is a very tight-knit community and they have been very welcoming to me.”

While working at University of Illinois, Doherty maintained his relationships with the USPNT and actually planned to accompany the team to Seville, Spain in 2019 when they compete in the IFCPF World Cup, but will have to miss the trip due to scheduling conflicts. Doherty remains hopeful that he will have the chance to work with the team again in the future.

“I would love to work with the USPNT again and build on the relationships I have with staff members and athletes that I hope I can continue,” Doherty said.

While he will not be able to attend the World Cup event, Doherty’s new job has opened new doors to opportunities with the US Paralympic Track team.

“The University of Illinois Wheelchair Track team is the only collegiate wheelchair track team in the country, so we have a lot of Paralympians that went to school here, trained here or both,” Doherty said. “I was able to travel with the US Paralympic Track team to London for the London Marathon. Out of the ten athletes that US Para Track brought to compete in the London Marathon, seven of them currently train with us at the University of Illinois and two more were alumni of the program.” 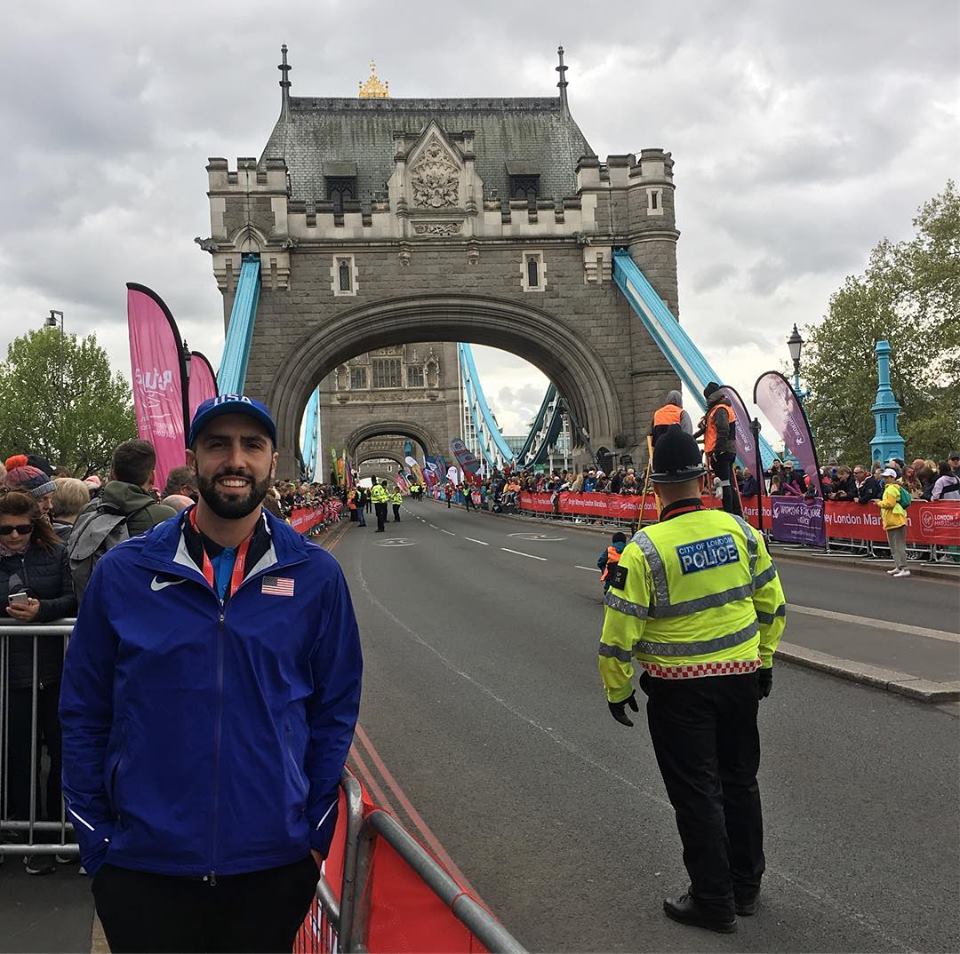 SLU Athletic Training Alum Connor Doherty, MAT, ATC, at the London Marathon where he worked with the US Paralympic Track Team.

SLU Athletic Training Program Director Anthony Breitbach, PhD, ATC, was not the least bit surprised to find Doherty having professional success or to see him working with such unique, competitive athletes.

“Connor’s skills and openness to opportunity has led him to this unique professional role,” Breitbach said. “In the Jesuit tradition, he is truly a ‘person for others’.”

Doherty hopes to be able to travel with the US Paralympic Track team to Peru in August of 2019 for the Para-Pan Games.

“My goal is to just continue to work with teams and athletes that are committed to their health, team success and want to compete at a high level.”