The Saint Louis University (SLU) Medical Laboratory Science (MLS) program recently announced students Conor Bischel, Kelly Gambino and Abigail Sondker as this year’s recipients of the Sr. Mary Dolorosa Pope/Anna Warren Oller Scholarship. The scholarship is open to rising juniors and seniors in the MLS program and awards $5,000 of financial aid to each of the recipients. 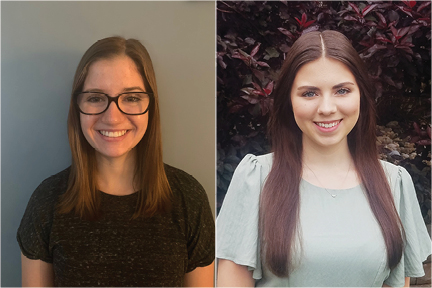 The Sr. Mary Dolorosa Pope/Anna Warren Oller Scholarship was instituted in the memory of two individuals instrumental to developing the former Biomedical Laboratory Science (BLS) department (now housed in the Clinical Health Sciences department). Sr. Mary Pope was the first chairperson of the BLS department and Anna Warren Oller was a highly revered former faculty member who passed away suddenly in the prime of her career.

Gambino knew it would be tough to earn the scholarship, so she was thrilled to learn that she had been named a recipient.

“When I learned that I had been awarded the Pope/Oller Scholarship, I was honestly very surprised. I really didn’t think I was going to get it considering the competitive applicant pool,” Gambino said. “When I received the email, I was so happy and appreciative. Even if I wasn’t chosen, I still felt thankful to write the submission because it taught me more about how passionate I am about this field.”

Bischel was also happy to be named a recipient of the Pope/Oller Scholarship. He was particularly appreciative that the SLU MLS faculty enjoyed his ideas for the future of the MLS field and decided to give him this honor because it was the faculty that inspired him to get involved in the program in the first place.

“It was during a meeting with the MLS faculty at SLU that I decided to pursue the major and attend SLU,” Bischel said. “They were able to explain exactly how my MLS education would go, what kind of positions and options would be available after my education and other important information regarding the field. This reassured me that not only would an education in MLS be worthwhile, but that the faculty would be there to help me through it.”