Saint Louis University (SLU) Physician Assistant (PA) student Scott Shadrick recently completed the Bank of America Chicago Marathon as a charity runner supporting the Crohn’s and Colitis Foundation of America (CCFA). Shadrick completed the race in a time of 3:50:13, finishing 5,189th out of approximately 35,000 runners. Shadrick’s fundraising efforts for the event raised $3,271.86 for the CCFA, exceeding his initial goal of $1,750. 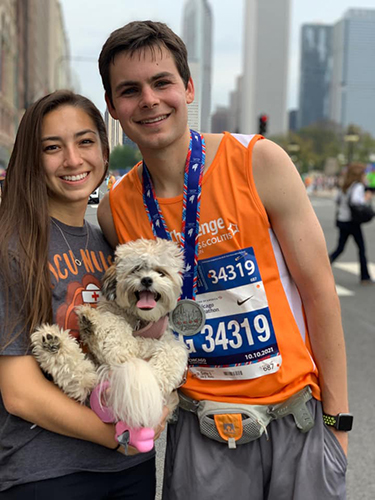 SLU PA student Scott Shadrick and his fiancé after Scott ran the Chicago Marathon, raising over $3,000 to support the Crohn's and Colitis Foundation of America in the process.

Supporting the fight against Crohn’s Disease is a cause that is near to Shadrick’s heart. At the age of five, he was diagnosed with Crohn’s Disease and struggled with the illness for some time.

“As a kid, it was often embarrassing and isolating when my pain, fatigue and seemingly endless trips to the doctor kept me out of activities with my peers,” Shadrick said. “CCFA provided me with the amazing opportunity to connect with other kids my age at their Camp Oasis. For the first time in my life, I saw that there were others going through the same thing that I was going through.”

Shadrick considers himself to be incredibly fortunate to have been in remission for nearly 10 years now and took the Chicago Marathon as an opportunity to give back to an organization that is helping others and constantly searching for a cure to Crohn’s and colitis.

Completing a marathon has been a bucket list item for Shadrick for some time and he said the Chicago Marathon was an amazing experience.

“The Chicago Marathon exceeded all of my expectations. The energy there was incredible, and it was so cool getting to run through Chicago with so many people lining the streets in support of the runners,” said Shadrick. “It was also amazing to run alongside other members of the CCFA team challenge in unity for the same cause. Despite how tough it was at times, I never expected that running 26.2 miles could be so fun.” 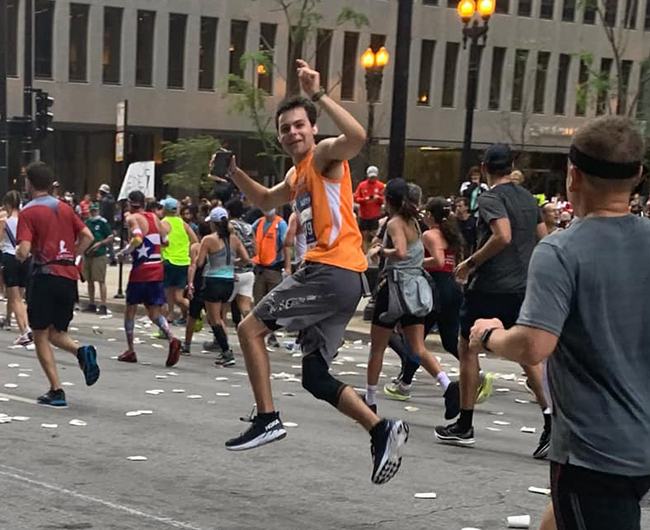 The Bank of America Chicago Marathon welcomes thousands of participants from more than 100 countries and all 50 states, including a world-class elite field, top regional and Masters runners, race veterans, debut marathoners and charity participants. The race’s iconic course takes runners through 29 vibrant neighborhoods on an architectural and cultural tour of Chicago. The Bank of America Chicago Marathon is a member of the Abbott World Marathon Majors and is an internationally renowned running event.