In late August, a storm was making its way across the Gulf of Mexico towards Louisiana. This was nothing new for residents of the area, who hoped it would veer of course and miss them as the storms usually do. This storm was unique, however, in the way that it quickly built up strength and stayed right on course for the city of New Orleans. On August 29, exactly 16 years after Hurricane Katrina hit New Orleans, Hurricane Ida made landfall in Louisiana. 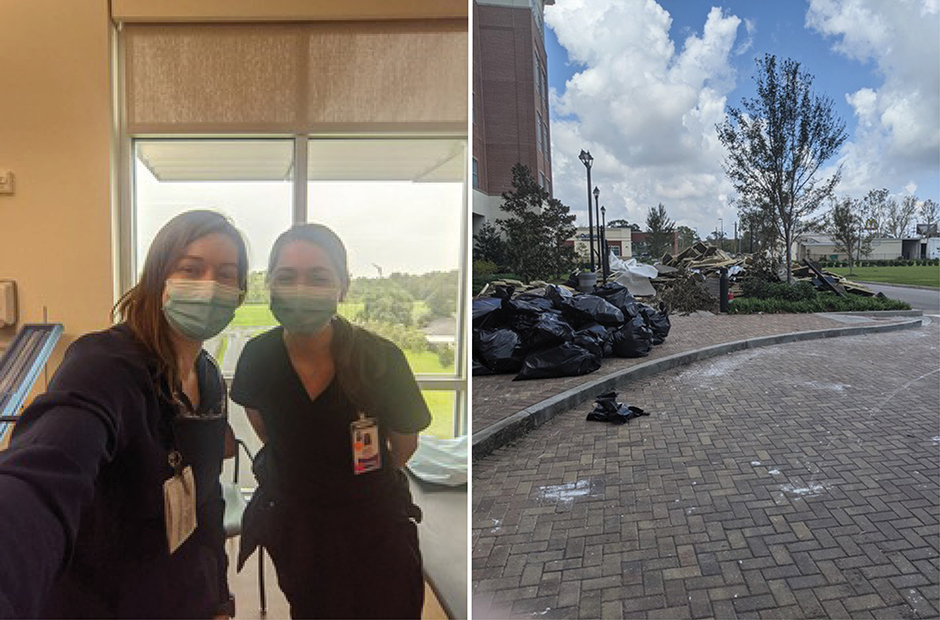 Left - (left to right) SLU DCHS alumnae Jessica Dworak and Carolyn Hardman; Right - some of the aftermath of the storm outside of Ocshner Rehab Hospital.

Ida, then a Category 4 storm, ravaged through New Orleans and the surrounding region, leaving over one million people without power, severe property damage throughout the region and flooding in many areas. Many residents were able to evacuate the area before the storm hit, however, Ida gained strength so quickly that it did not leave enough time to call for a mandatory evacuation, so many individuals had to ride the storm out. Two of those people who stayed behind were Saint Louis University (SLU) Doisy College of Health Sciences (DCHS) alumnae: Nutrition and Dietetics alumna Carolyn Hardman, and Physical Therapy alumna Jessica Dworak.

Hardman and Dworak both work at Ocshner Rehab Hospital and Ida was going to be the first up-close-and-personal experience with a hurricane for each of them. Hardman explained what it was like as the storm approached.

“The Friday before the storm, it started to get more real. I had conversations with my coworkers who were born and raised in New Orleans about how to prepare for the storm, what to do to my house, what to pack and bring to the hospital as it looked like the storm was coming towards us,” Hardman said. “I’m from the Midwest, so I had no idea to do things like tying your trash can down. Sunday morning, I arrived at the hospital with my air mattress, pillows and blankets at 4:30 am and learned that many of my coworkers had evacuated and that my role would change: our kitchen was now short-staffed and we needed to serve over 200 people each meal.”

When the storm hit Ocshner Rehab hospital, the facility and its staff immediately began to be tested. The building lost power, but the backup generators kicked in and kept them running until power was restored about a week later. The roof was badly damaged, which caused patients on the top floor to have to be relocated to other areas due to leaking and overall roof instability. Perhaps the toughest obstacle, Hardman explained, was when the building lost water pressure.

“We lost water pressure and had no water supply. There was talk on evacuating patients to the main hospital, however they had to absorb patients from many other hospitals which were in worse shape,” Hardman said. “We had to figure out how to prepare meals for over 200 people with the food we had and without using dishes. We also had limited food, as we had no food truck deliveries for six days and no plumbing. We eventually got trucks with tanks of water they hooked up to our water supply out front of the hospital.”

With all this happening, Hardman had to shift from her normal role as a Registered Dietitian to help see the hospital through the storm.

“I was not seeing patients like I typically do, we had to meet the basic nutritional needs of patients and staff during this crisis,” Hardman said. “I worked in the kitchen and acted as the liaison between the kitchen and the unit leaders to make sure all staff and patients were fed. I also served as a nutrition resource in order to continue to adhere by patients’ therapeutic diets. We were very understaffed in the kitchen - five people total.”

Dworak also experienced changes in her day-to-day responsibilities in the aftermath of the storm as the hospital staff worked to maintain operations.

“The therapy team was only three people during the storm as opposed to our normal 15 to 20,” Dworak said. “We became basic support staff, assisting with patient transfers, bed mobility and, in general, just getting people moving if we could.”

As the storm passed and the hospital started working towards a return to normalcy, Hardman reflected on her experience working through the hurricane.

“This experience has been humbling. It has allowed me to better understand my role as a dietitian and how nutrition in disaster looks different than in my day-to-day role,” Hardman said. “It helped me better understand the roles our leaders play; the leadership they provided in this crisis was admirable. It also gave me a new point of view of what it is like for patients in the hospital during a crisis.”

Dworak expressed her gratitude making it through the storm and the support that all residents of the hospital were able to show each other during that time.

“I’m grateful for my health and safety and the communal energy that was shared among the group who was there together supporting one another during that time, including our patients,” Dworak said.