SLU’s Team Spirit: What It’s Like to Cheer on the Billikens

The noise is deafening. The fans flood the court. The team mascot is swept up and carried on top of the crowd. That's team spirit. That's what it's like to be a Billiken fan at Saint Louis University. 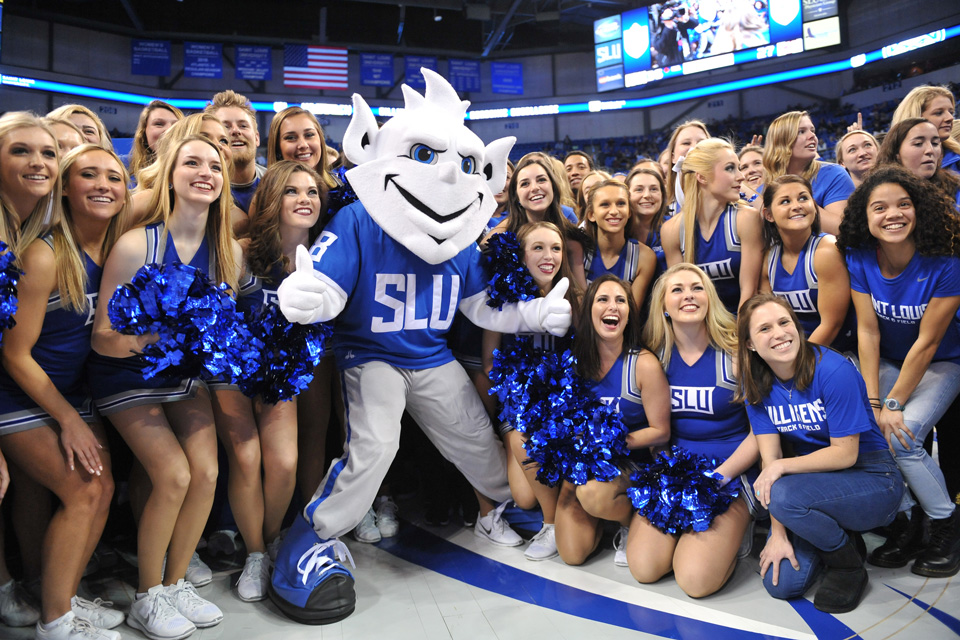 From free tickets to home games to a student section that blows the roof off Chaifetz Arena and echoes across campus from Hermann Stadium, cheering on the Billikens is a highlight of campus life. In fact, SLU is the only NCAA Division I school in St. Louis.

When it comes to basketball, one of SLU's signature sports, the spirit squad's name says it all. They aren't just SLU fans; they're SLUnatics.

"The energy at Chaifetz can be seen and felt coming from the student section," says SLUnatic Daniel Tarchala. "When the crowd is pumped, the team can feel it."

The SLUnatics, and their equivalents for soccer fans, Legion 1818, make games an amazing experience. The SLUnatics put 10,000 T-shirts on the seats of Chaifetz Arena for the annual Billiken Blizzard fan-participation event and don blue body suits and face paint during the Billiken Blue Out game.

Hungry? Check out the free food and drinks at pep rallies before selected men's basketball games. And don’t miss the chance to take a picture with an adorable mascot.

Ready to be a sports fan at SLU? Here's what else you need to know:

The Billiken is everywhere. It's the mascot, the namesake of SLU's NCAA teams and is painted everywhere from the floor of Chaifetz Arena to the sides of fan's faces.

2. Who are the Saintsations?

The Saintsations are SLU's cheer and dance team. While you're getting to know students who make more than just a hobby of being a sports fan, check out the Billiken Band, which will have you humming SLU's fight song, "When the Saints Go Marching In," all night long.

3. What are SLU's school colors?

4. What is it like to play sports at SLU?

It's not just all headlines and competing on a national stage. SLU's student athletes posted a 3.41 aggregate GPA for the 2016-17 academic year. Find out what you need to do to be ready.

Keep Exploring Be A Billiken