John James, Ed.D., professor of educational leadership, and Maureen Wangard, Ph.D., director of graduate admissions in the School of Education, attended the World Union of Catholic Teachers (WUCT) conference in Rome in mid-November, which included an audience with Pope Francis. 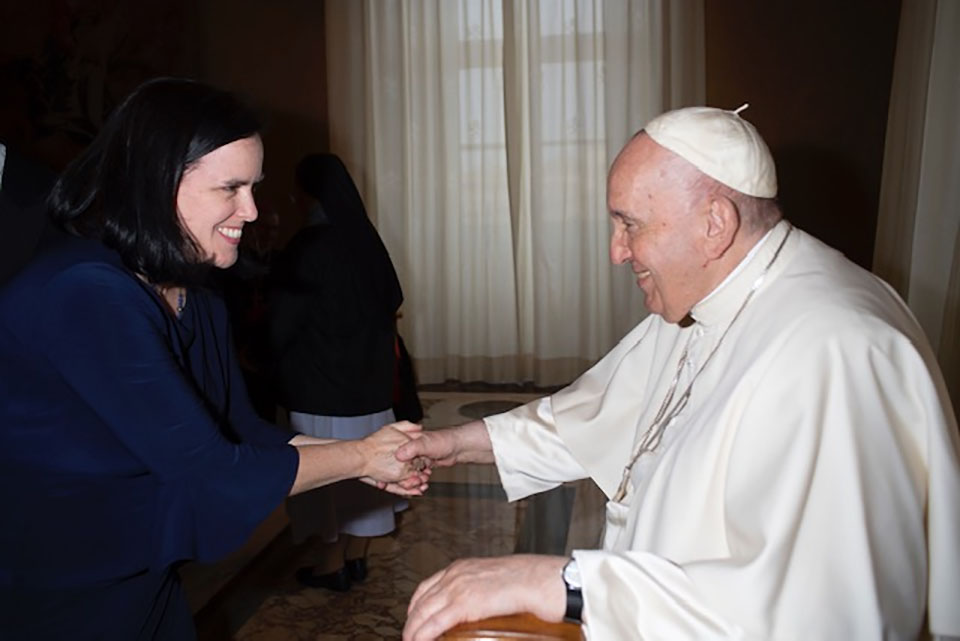 Maureen Wangard, Ph.D., director of graduate admissions for SLU's School of Education, met with Pope Francis during the WUCT conference in Rome in November. Pope Francis held an audience with the group of Catholic educators from around the world, including SLU delegates Wangard and John James, professor of educational leadership.

Saint Louis University is the only Catholic university in the United States that is a WUCT member, so James and Wangard were joined by delegates from all over the world. The World Union of Catholic Teachers was established in 1951 as a network of Catholic teachers’ associations with the aim of coordinating their study and research work to bring the teachings of the Church into the world of education. The highlight of the conference was an audience with Pope Francis, during which he celebrated Catholic educators as “co-workers of the pope” to encourage and motivate Catholic teachers to be fully aware of their important mission as educators and witnesses of the faith, as individuals or within groups of colleagues.

James feels a personal responsibility to spread the word of the Global Compact on Education, an initiative designed “to unite efforts in a broad educational alliance, to form mature individuals capable of overcoming division and antagonism, and to restore the fabric of relationships for the sake of a more fraternal humanity.” 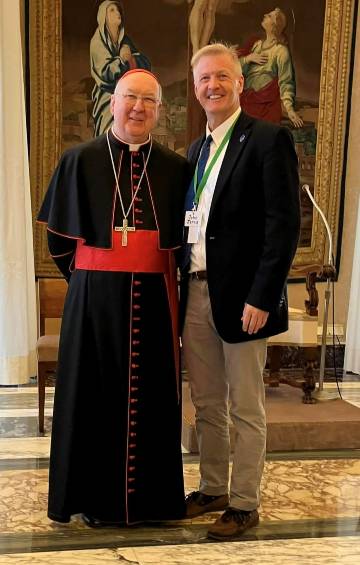 While attending the conference, James and Wangard formed connections to Catholic school leadership educators from around the world, many of whom expressed interest in forming alliances with SLU’s Institute for Catholic Education. Two faculty from the University of Glasgow plan to visit Saint Louis University in the summer of 2023 to discuss ways that SLU can collaborate with them to promote Catholic school leadership development.

To that end, James and Wangard indicated plans to increase enrollment in the online master’s degree in an educational leadership program that meets several Saturdays per semester.  In addition, James plans to form a new Catholic school educational leadership doctoral cohort beginning in August of 2023 that meets online in the fall and spring and on SLU’s campus for two weeks in June. James believes this will promote relationships among Catholic school educators nationwide to support alliance initiatives in the Global Compact on Education.

As a final request of us, the pope asked that we raise awareness among Catholic teachers of the Global Compact on Education. How can I not do this?”

In response to Pope Francis’ request, James and Wangard look forward to building alliances to support Catholic School Education in the United States.

For more information about Saint Louis University’s School of Education, please call 314-977-3292 or visit the website.