Friends, family and the SLU-Madrid community came together to honor the newest Madrid Billiken graduates at this year’s midyear commencement. SLU-Madrid conferred degrees to 15 students from four countries and six U.S. states. 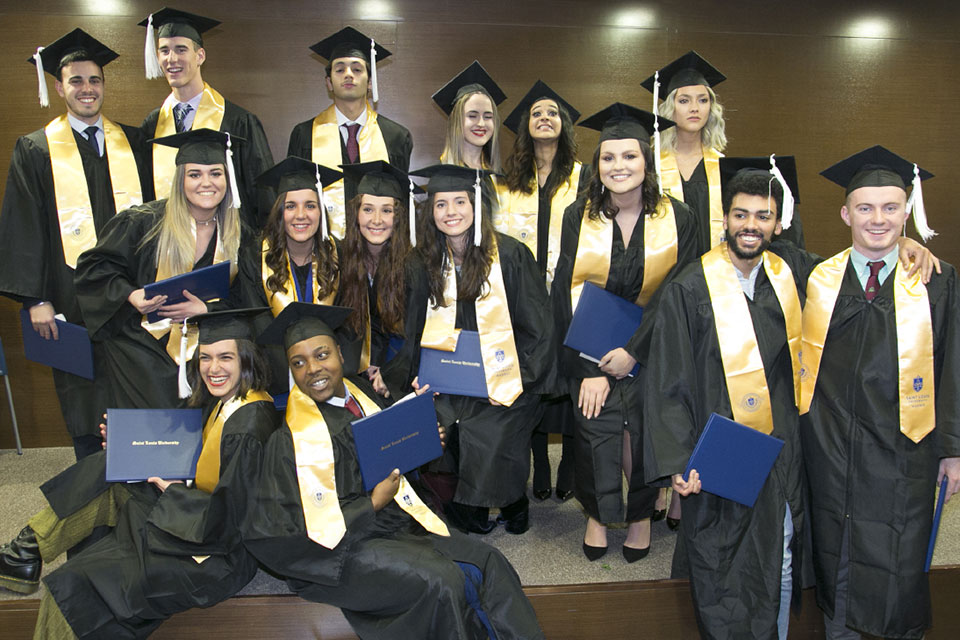 At this year's midyear commencement, SLU-Madrid students from the U.S., Spain, Egypt and Mozambique joined the ranks of SLU-Madrid alumni.

Assistant Dean Jaime Ortiz served as master of ceremonies, opening the event with words of welcome. After Rev. James O'Leary, S.J, led the invocation, Director and Academic Dean Paul Vita, Ph.D., reflected on the power of the craft of teaching in impacting the lives of students.

“The formative partnership between faculty and students lies at the heart of the academic enterprise,” Vita said. “All faculty are, by turns, transmitters of knowledge, purveyors of culture, initiators of professional training, mentors, role models, research colleagues, and in some cases, lifelong friends of our students.”

The second student speaker, Rehab, who hails from Cairo, Egypt, offered her remarks in English, a language she continued to develop during her time at SLU-Madrid. Rehab compared her University experience to sampling a new kind of sandwich that stimulated her taste buds in surprising new ways.

This year, students nominated business professor Marta Moreno, Ph.D., to deliver the faculty remarks. After 20 years as an educator at SLU-Madrid, Moreno conveyed her passion, wisdom and common sense in urging students to enjoy the new phase of their lives and to never be afraid to make mistakes.

“I hope your SLU education has taught you to think about vocation in a broader sense than an occupation or career,” he said. “I hope you see your path ahead, using your SLU education, your talents, to be in service to humanity, to be in service to those on the margins of our society: the homeless, persons displaced from war, famine, environmental disasters, those suffering from racism, religious bigotry – those who need our attention and our help.”

The video came to a close as he officially declared the graduates sons and daughters of Saint Louis University forever.