In celebration of former Saint Louis University president, Father Lawrence Biondi, S.J., who served and led for more than 25 years, SLU-Madrid unveiled and dedicated the Fr. Lawrence Biondi, S.J. – Madrid Campus Plaza. This tribute captures the deep appreciation felt by the University community, both in St. Louis and in Madrid, to Biondi for extending his vision and helping transform SLU and SLU-Madrid into the campus and community that we know today.

After Associate Dean of Sciences and Engineering Dr. Taieb Gasmi kicked off the ceremony with words of welcome, Fr. James O’Leary, S.J., led the invocation, in which he blessed the plaza and all those who come together to enjoy it. 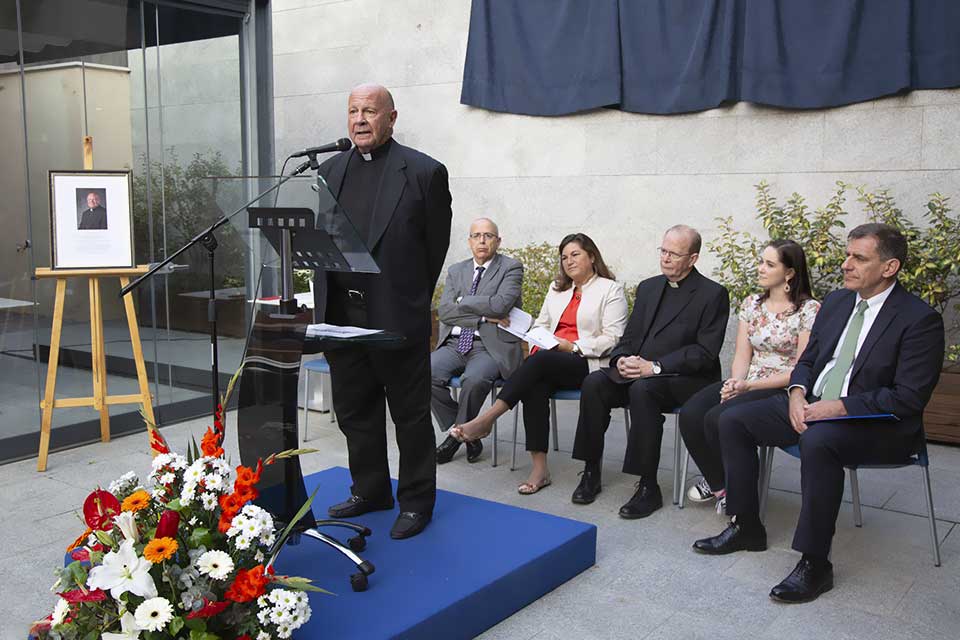 SLU-Madrid honored former University president Fr. Lawrence Biondi in a ceremony dedicating the Fr. Lawrence Biondi, S.J. – Madrid Campus Plaza. Biondi spoke at the event, sharing the ways his own life story influenced his relationship with the Madrid Campus. He recognized other leaders such as Fr. Raymond Sullivant and Dr. Paul Vita, who have been instrumental in forming the SLU-Madrid Campus and community that we know and love today.

Student Government Association President Sierra Zima then described her initial impressions when she first visited SLU-Madrid as a prospective transfer student. She vividly recalled entering the bustling San Ignacio Hall, where students were socializing and lounging, walking through Padre Rubio Hall, the academic center of the campus, and passing through Padre Arrupe Hall, where University staff were hard at work, recruiting students, managing personnel, and managing the day-to-day finance and operations. Zima said:

"All three buildings on this campus have aesthetically pleasing attributes, like beautiful views of the mountains and modern furniture and lush landscaping, but this campus offers more than what you can see on the outside. SLU-Madrid is a place where students feel at home. It’s a place we can come to study and grow, both as students, future professionals and people. SLU-Madrid is also a place where students have the opportunity to branch out and meet new people from all over the world. While I and current students know the SLU-Madrid campus for what it is today, there were many transformations that occurred which helped get it to this point, and most of those transformations were led by Fr. Biondi."

Director of Finance and Operations, Victoria Villarreal, who worked closely with Biondi during the transformative years, commented, “Father Biondi saw potential in the Madrid Campus early in his tenure.” Until this time, SLU-Madrid operated exclusively in rented space, she explained. Under Biondi’s leadership, Padre Arrupe Hall and Padre Rubio Hall were acquired and renovated, creating the beautiful campus that we enjoy today.

SLU-Madrid Director and Academic Dean Paul Vita, Ph.D., read words of tribute sent by Aloys H. Litteken and Carol Litteken, as representatives of the University’s Board of Trustees. They recalled Biondi as a remarkable leader who was widely respected as someone who could build a better tomorrow. The Trustees shared and supported the vision he had for the Madrid Campus.

The final speaker was Biondi himself. He began by sharing his own life story as it relates to the Madrid Campus. He was raised in a first-generation Italian immigrant family in an area of Chicago that was a mix of Polish, Italian, Czech and Puerto Rican immigrants. When he entered the Jesuits, he began to learn foreign languages and developed a deep-seated passion for language, linguistics and culture. He believes that this passion lies at the core of his love for the Madrid Campus.

He went on to recognize Fr. Raymond Sullivant, who founded the Madrid Campus with a group of 12 study abroad students back in the 1960’s, and he described his first visit in which he encountered the Office of Finance in a small space under a staircase. After recalling the years of growth, he concluded, “The quality of students has increased, the quantity has increased, and we are in a really good place under the leadership of Paul Vita.”

With the authority vested in him by Saint Louis University and its Board of Trustees, Vita officially dedicated the “Fr. Lawrence Biondi, S.J. – Madrid Campus Plaza” and the curtain was lowered to unveil the inscription upon the wall. Fr. O’Leary sprinkled holy water on the ground before the guests and speakers continued the celebration with a cocktail reception.