Former Spanish President Felipe González inaugurated the workshop “Diálogos sobre Cuba,” a two-day event focused on examining the role that the Fuerzas Armadas Revolucionarias (FAR) could play in the political future of the island. Organized by Associate Dean of the Humanities and Social Sciences, Dr. Laura Tedesco, the event brought Cuban activists together with politicians and scholars from Spain, Argentina, the United States and Chile. 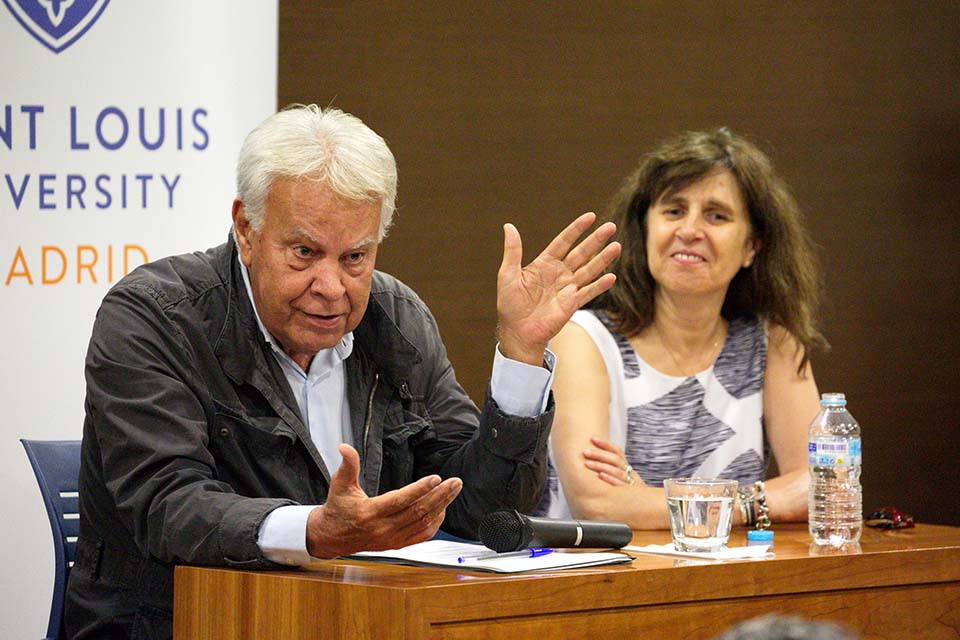 As former Spanish president who worked directly with Fidel Castro for many years, González offered privileged insight into the past, present and future of Cuba. In his address, he affirmed the power of democracy, urged Cuban activists to remain optimistic and shared insight from Spain’s own transition to democracy.

In his inaugural address, González shared anecdotes from his presidency and his own long and complicated relationship with the late Fidel Castro. In a context in which many could not contradict Castro, González recalled that he often did. In following with the central theme of the conference to examine the potential impact of the FAR on a democratic transition in Cuba, he affirmed that Spain’s armed forces played a critical role in Spain’s own transition to democracy.

González drew from his experiences as president as well as his vast knowledge of world politics, mentioning parallels and contrasts with past and present political events in Colombia, Argentina, Costa Rica, Thailand and China. He kept the discussion, nonetheless, both informal and, at times, humorous, likening the role of an ex-politician to a China vase: they need to be cared for and their value is universally recognized, but they always seem to be in the way.

Overall, his message directed to the Cuban activists in attendance was one of optimism. “Por favor, no pierdas la esperanza,” he implored them, toward the end of his presentation. He asserted that he fully believes in the power of democracy, as someone who also lived more than half of his life under a dictator, Francisco Franco.

Over the course of the two days, distinguished speakers delivered presentations on the role of the military in times of change, military management, the role of the armed forces in the return to democracy in both Chile and Spain, and strategies to increase dialogue in the unique case of Cuba. Speakers included Tedesco, Dr. Rut Diamint  (Universidad Torcuato Di Tella, Buenos Aires), Marcos Robledo (former defense secretary of Chile), Richard Youngs (Carnegie Endowment for International Peace, Washington), Rafael Martínez (Universidad de Barcelona), and Cuban activist Manuel Cuesta Morúa (Otro 18, Cuba).

Participants also visited the offices of Fundación Carolina, an institution that promotes the exchange of social, educational and scientific information between Spain and other Ibero-American countries. There, José Antonio Sanahuja, president of the foundation, addressed the activists directly.

The Cuban activists in attendance represented a variety of professions involved in Cuba’s independent civil society. Two have sought political asylum and now reside in Spain. The group included a freelancer, a doctor, an actor, several artists, a curator, a student Twitterer and an independent journalist.  Throughout the workshop, they addressed a number of questions and topics regarding their activist work.