As a summer intern at the Four Seasons Hotel in Dallas, Texas, SLU-Madrid senior Laura Moyneur has gotten a firsthand look at management and operations in the hospitality industry.

She not only works in direct customer service roles in the restaurant, bar and pool, but she also shadows staff members in departments including accounting, purchasing, information technology, human resources, golf operations and event planning. 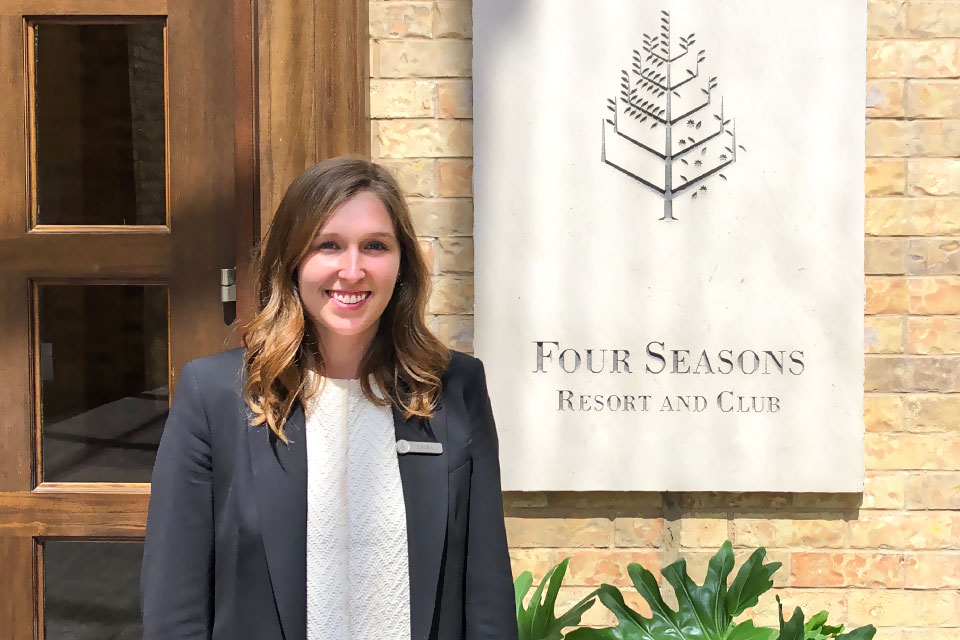 Moyneur believes that the summer internship program at the Four Seasons is particularly valuable to her career development as she has been exposed to a variety of different roles within the operations and management of a luxury hotel. Not only is she gaining insight into the hospitality industry in general, but she is also exploring potential career paths.

A senior pursuing a degree in economics and Spanish, Moyneur has found her internship at the Four Seasons to be particularly useful for career development, since she is being exposed to so many different roles within the company. “Before this internship, I had no idea what career path I wanted to pursue after I finished school,” she said. “This summer I have the opportunity to explore various fields, which hopefully will let me see what I like and what I don’t like. So far, I’ve really enjoyed working with the event planning team and human resources.”

According to Moyneur, the Four Seasons also has a well known manager training program which is often staffed with former interns. “Shadowing in the various departments will help me decide which of these programs I might apply for,” she added.

The Four Seasons offers its employees the unique benefit of being able to work at its hotels around the world, a feature that intrigues Moyneur, who has fallen in love with living abroad. Originally from Minneapolis, Minnesota, she was drawn to SLU-Madrid after having studied abroad in Italy. “I loved being in Europe and learning a new language, and that’s why I decided to apply to SLU-Madrid. I felt that earning an American degree while experiencing a different culture was an amazing opportunity.”

SLU-Madrid's internship program offers robust opportunities at employers across the globe. Students, like Moyneur, are gaining transnational experience at businesses and non-governmental organizations such as the U.S. and U.K. embassies, Ernst & Young, Deloitte, Julma Cosmetics, IMDEA, Mapfre and NGO Rescate.