The Fourth of July Goes Global at SLU-Madrid

Nothing beats a traditional summer barbecue for Americans abroad on the Fourth of July. Dozens of American faculty, staff and students joined peers from Bolivia, Romania, Morocco, Spain, Venezuela, Ireland, the Philippines, Uruguay and other countries worldwide for this year’s annual Fourth of July barbecue.

The celebration was catered by SLU-Madrid's dining services, Unity by Sodexo, and featured traditional all-American summer fare: hamburgers and a build-your-own ice cream sundae bar. The team at Sodexo got into the spirit of the holiday, decorating the cafeteria with American flags and playing the Star Spangled Banner on loop. 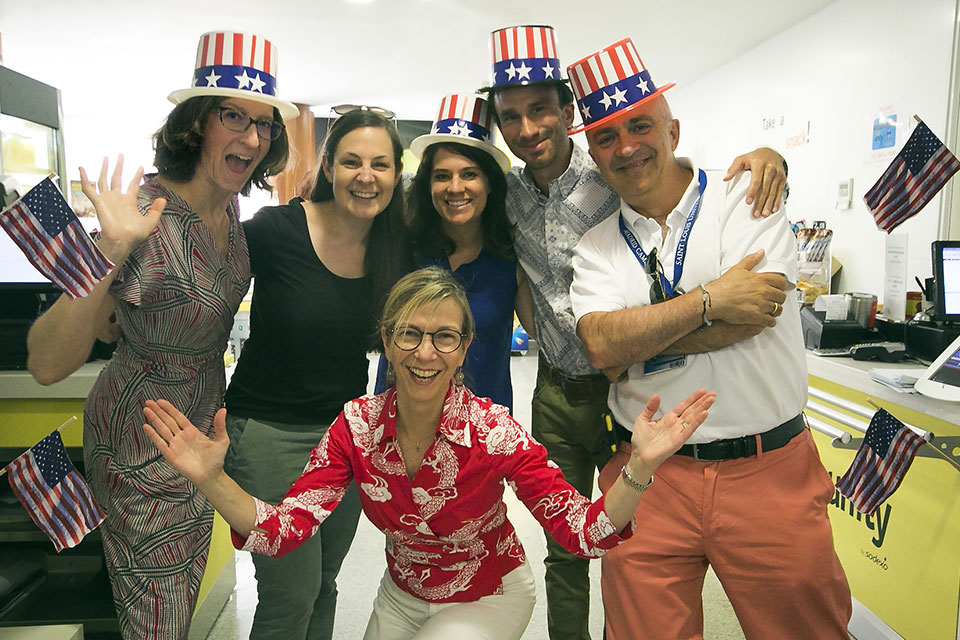 The staff in the SLU-Madrid Office of Admissions celebrated the holiday with a team lunch. Director of Admissions Heidi Buffington (far left) reflects that the Fourth of July is an ideal moment to reflect on and celebrate our identity as an American university abroad.

“After being in Madrid for three years, I have come to learn that it’s the little things that really make you feel at home,” noted an American student from Connecticut. “Sharing a Fourth of July celebration with my international friends was lots of fun.”

Heidi Buffington, director of admissions, rounded up the team in the Office of Admissions for a group lunch. “The Fourth of July is an opportune moment for our diverse campus community to come together and celebrate our identity as an American university abroad,” she said.