Monserrate López Honored as Athlete of the Month

Sports director César Rioja named Fernando Monserrate López Athlete of the Month in recognition of his accomplishments on the soccer field. A talented player with a tactical eye, Monserrate López currently serves as captain of the SLU-Madrid team and competes in a regional league with the Celtic Castilla CF, all while keeping on top of his studies as a sophomore majoring in communication. 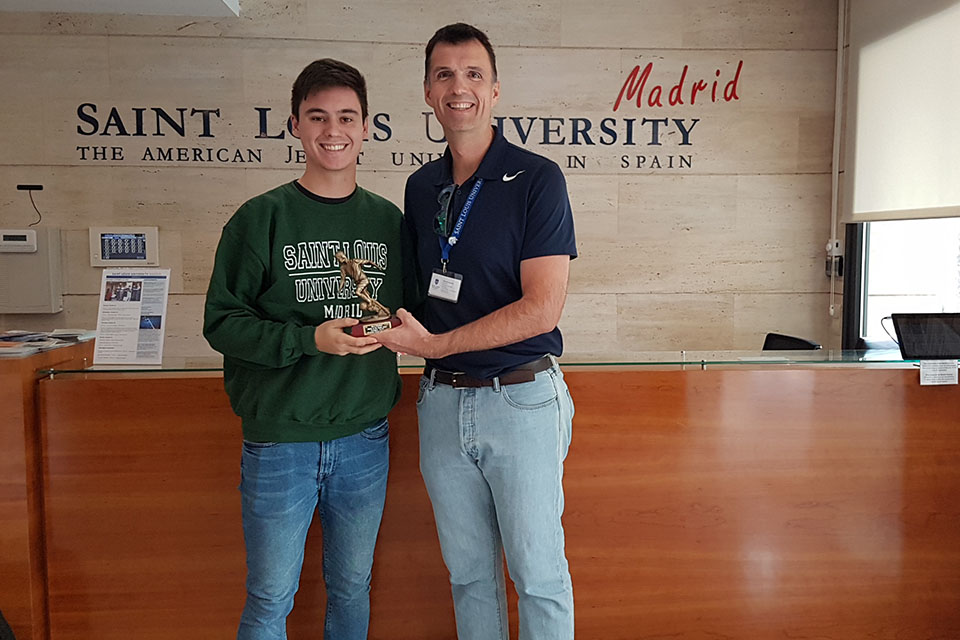 Sports director César Rioja presents Monserrate López with the Athlete of the Month trophy. Rioja nominated him for the award in recognition of his high-level soccer skill , exemplary sportsmanship and team mentality.

Monserrate López began playing soccer at the age of seven. When he was 12 years old, his family moved from his hometown in Murcia, Spain, to Bristol, England. There, he began to compete at a high level. He was offered positions at several academy clubs and later North Somerset FD. With North Somerset, Monserrate López was part of the team that earned the title of league champion after going undefeated in the 2013-14 season. He also played for Bristol City FC, a club in the junior Premier League’s Southern Division that recruited him for four years.

After moving back to Spain in 2015, he continued playing soccer with Murcia’s Liga Nacional Juvenil and later in División de Honor before playing at the semi-professional level in the Spanish Third Division with Muleño CF.

According to Rioja, “Fernando is a true team player who easily adapts to new teams and teammates. His contributions to creating a great team atmosphere in the locker room are also remarkable. It is a pleasure getting to know students like him.” Rioja serves as academic advisor to all student athletes who continue high-level training and competition while pursuing their university degrees. He also assists all SLU-Madrid students wishing to stay active and enjoy athletics.