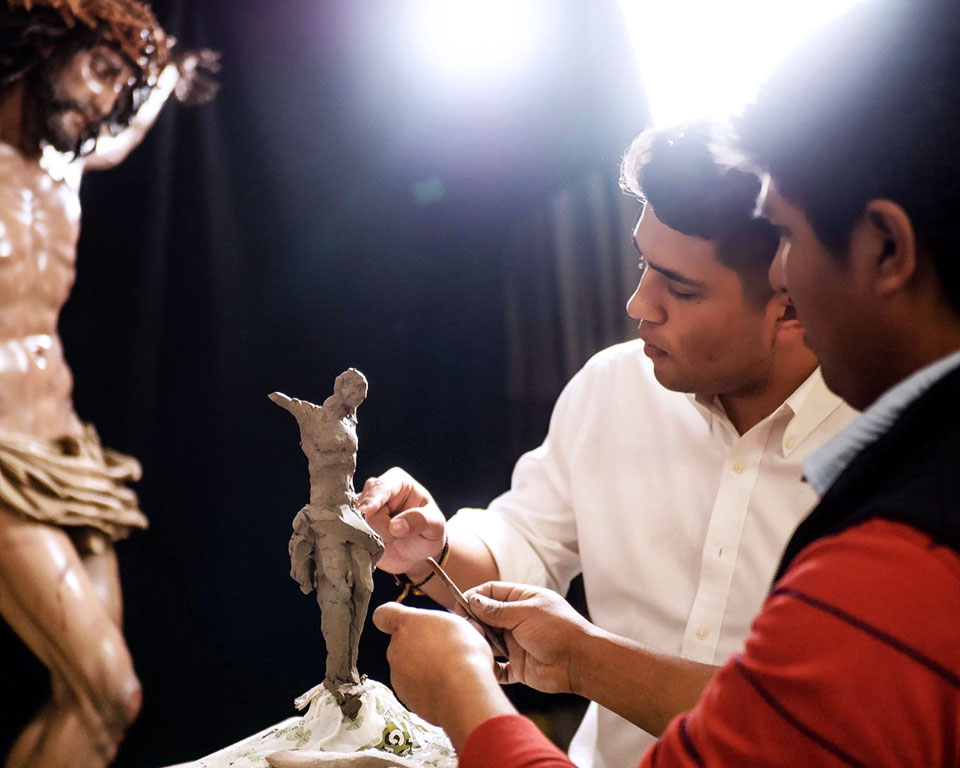 Di Napoli works with an Andalusian artist to design a statue that is being molded for a Heritage Design Group commission in California. While studying business and art history in Madrid, Di Napoli has been working as an independent art consultant, connecting Spanish collectors and artisans with niche markets in the United States.

Nick Di Napoli is a senior graduating in May with a double major in art history and international business. As a high school student at St. Michael’s Abbey Preparatory School in California, Di Napoli developed an interest in religious art through his exposure to Latin, philosophy, theology and monastic life. When he began his freshman year at Saint Louis University, he was already inspired to pursue a major in art history.

Speaking about the importance of the field, Di Napoli said, “I have come to understand art as a quest for beauty, a vital element found in every civilization throughout history. Studying it reveals to us priceless information about our collective human experience and compels us to realize that our world is full of meaning and purpose.”

Di Napoli believes art history brought an international dimension to his studies and budding career at an early stage. His first foray into the international sphere came his sophomore year, which he spent abroad in Bologna, Italy, studying the Italian Renaissance. At the end of his year in Italy, he decided to continue his SLU degree at the Madrid campus, where he discovered his passion for Baroque art of the Spanish Golden Age. During his junior year he was invited back to the main campus in St. Louis to present his research paper “The Jesuit Influence on Baroque Architecture” at the Third Annual Jesuit Research Symposium.

During his time in Madrid, Di Napoli has acquired work experience in various fields of the art industry. His first internship was working at the Museo del Prado with Fundación Amigos Museo del Prado. There, he assisted special donors on exclusive tours of the collection and attended to inquiries from museum visitors at the information desk.

Thanks to the help of his SLU-Madrid professors Fabiola Martinez, Ph.D., and Curra Vericat, Di Napoli was introduced to the owners of one of the most extensive private collections in the city, Colección Granados. As an intern, Di Napoli had exclusive access to researching and cataloging masterpieces by artists such as Murillo, Ribera, Valdés Leal, and Zurbarán. Di Napoli’s senior research paper on one of the collection’s paintings, “El Cristo de Perdón” by Francisco Camilo, was recently selected to be presented this April at the 2019 SLU/UMSL Undergraduate Research Symposium.

In addition, Di Napoli has also combined his art experience with his passion for international business, connecting Spanish collectors and artisans to niche markets in the United States. He works as an international sales associate with Heritage Liturgical, a design firm in California that confects liturgical art, such as chapels, vestments and statues. Since he has been residing overseas, he has assisted Heritage by sourcing and importing Spanish art to the United States, collaborating primarily with Andalusian statue artisans called imagineros.

Looking forward, Di Napoli has considered pursuing a career in the art business field, such as museum management or in the auction house industry, though he also feels prepared to enter into the business world as a management consultant. Regardless of the career path he chooses, Di Napoli asserts that studying art history has helped him become well-rounded. “It’s helped me enhance my research and communication skills while becoming both critical and creative. I’ve learned how to form strong convictions supported by sound reasoning, but most importantly it’s allowed me to master communicating complex and abstract thought in succinct written form.”