SLU-Madrid Students Engage in a Cultural, Linguistic, and Creative Exchange with Children in Puertollano

Ten student volunteers traveled to the village of Puertollano in Ciudad Real for a weekend to grant the wishes of children who attend C.E.I.P. Menéndez Pelayo, a public preschool and primary school. In the entryway to the school, students can write their wishes on the leaves of a tree that is painted on the wall. The goal of the service trip was to grant one such wish: to fill the school with colors by painting three giant murals in the courtyard where the children have recess. 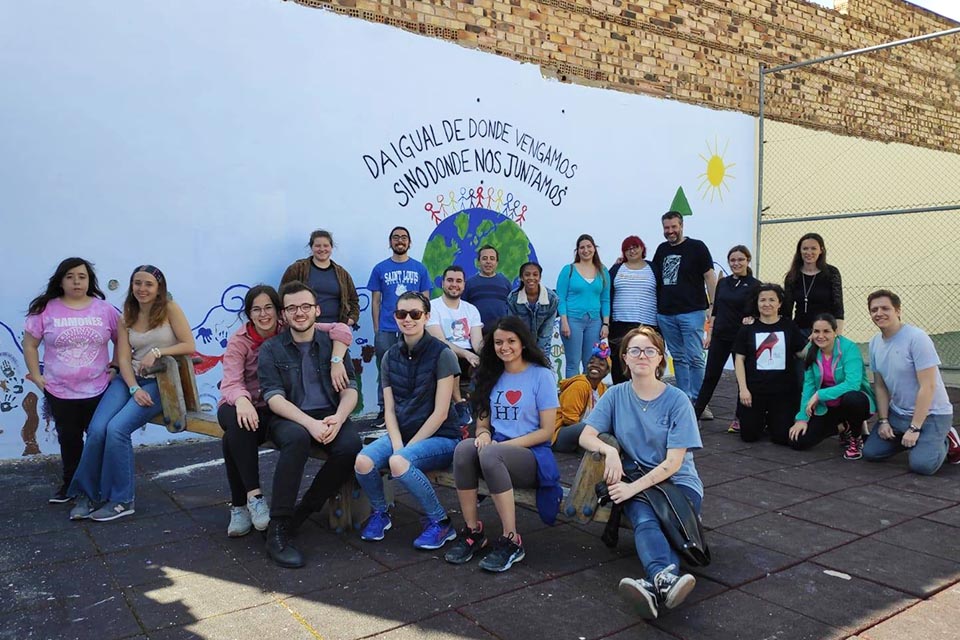 SLU-Madrid volunteers joined forces with the children and teachers at C.E.I.P. Menéndez Pelayo in Puertollano to grant the wish of the children to see their school filled with colors. The motto of the trip was: ­Da Igual de Donde Vengamos, Sino Donde Nos Juntamos (It doesn’t matter where we come from, just that we get together).

Together with Community ESL Coordinator Hamish Binns, the SLU-Madrid students offered a weekend-long program of activities for the children. The weekend kicked off with a welcome breakfast, complete with churros and abrazos, before Binns and the ten SLU-Madrid students headed to the school for a morning spent making storybooks, building balloon rocket cars and playing charades with more than 60 local children. Veronica Rose Chancy, one of the SLU-Madrid student volunteers, recalls a “morning of English learning, laughs and fun.”

The afternoon was dedicated to preparing for the highly anticipated mural project, an idea envisaged by the first group of SLU-Madrid volunteers who went to C.E.I.P Menéndez Pelayo during the Fall 2018 semester. The walls were sanded and the base coat was left to dry by 7 p.m. so it would be ready for the enthusiastic children’s paintbrushes the following morning. According to Chancy, preparing the walls “was a labor of love that took a bit longer to complete by our team of mural novices.” Students recovered from the day’s labors that evening as they enjoyed local cuisine (comida manchega) and the hospitality of hosts from the school and the local English academy of Gema Pérez.

“The next day cannot be described as anything but chaotic bliss,” says Chancy. “Our excited kids showed up on time, raring to put some paint on the walls. After some games to get out energy, we divided and conquered. One wall featured the kids' favorite words in English filled up by bright colors, another wall featured a mural of the globe and an ocean filled with creatures drawn by the children and designed by SLU-Madrid student Ava Thors. The last wall, my personal favorite, is an art gallery of the students' work. We created many little picture frames that each kid filled with whatever his/her heart desired.”

For Chancy, the weekend proved a meaningful experience connecting with children and visiting another part of Spain. The motto of the trip, ­Da Igual de Donde Vengamos, Sino Donde Nos Juntamos (It doesn’t matter where we come from, just that we get together) proved true: Participants from SLU-Madrid and the local school come from wildly different backgrounds and parts of the globe but were brought together by the weekend's activities.

The SLU-Madrid group wishes to extend a special thanks to María Gracia Ramos Gil, the director of C.E.I.P. Menéndez Pelayo, María Gracia, the school's English teacher, and Gema Pérez Pinto of the local English academy for their hospitality and support throughout the weekend.