Running for a Cause: SLU-Madrid Students Complete an Ultramarathon

With the goal of training hard, running farther and helping the community along the way, co-founders of the SLU-Madrid Running Club, William Carrick and Connor Christensen, raised funds to support Casa Ronald McDonald to motivate themselves to complete the Ecotrail 80 km ultramarathon.

Last year, Carrick, who is now a junior at SLU-Madrid, and Christensen, currently a senior, ran the Ecotrail 52 km race, a distance equivalent to 32 miles. “Although it was a difficult and painful race, we had a great time running and enjoyed challenging ourselves both physically and mentally,” comments Carrick. This year, they decided to take the challenge a step further by signing up to run the 80 km ultramarathon, the longest distance offered at the Ecotrail race. 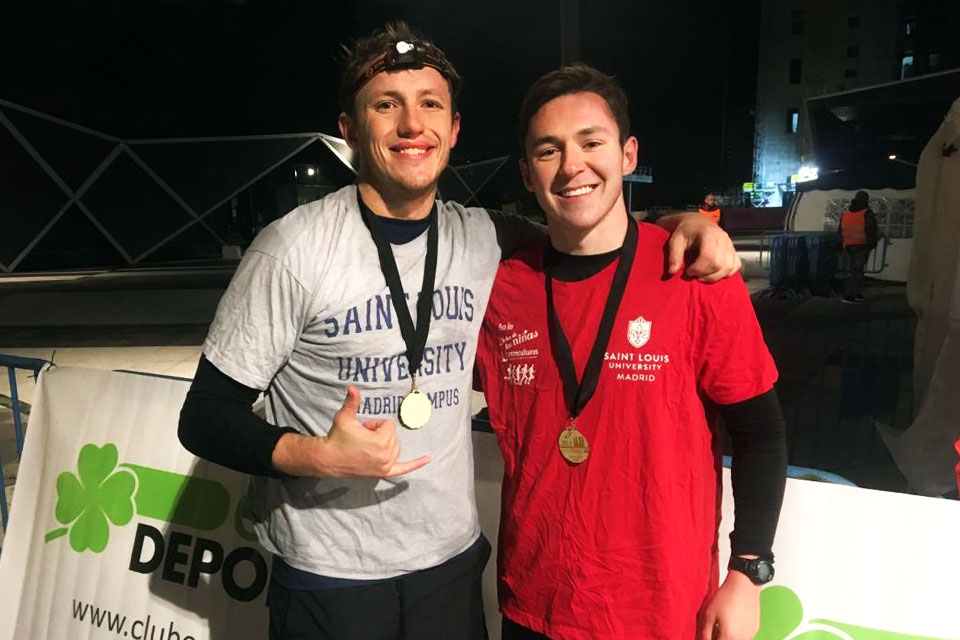 With a total distance measuring nearly two full marathons, the Ecotrail 80 km is a grueling race that takes runners through the mountains in the outskirts of Madrid. The race begins at the scenic Manzanares Castle first thing in the morning and lasts all day. Carrick and Christensen pose with their finisher's medals upon completion of one of the most challenging feats an athlete can face.

“In order to gain support and motivate ourselves to finish the run, we thought it would be a great idea to raise money for a cause for this event,” continues Christensen. They decided to support Casa Ronald McDonald, a non-governmental organization that assists with the housing needs of families with children who are hospitalized. Their efforts furthered those of sports director César Rioja, who organized two paddle tennis tournament fundraisers earlier this semester to support Casa Ronald McDonald.

Carrick and Christensen set two goals for themselves: to finish the 80 km race and to raise a total of 500 euros. Last weekend, they attained their first goal.

“Through participating in this event, they have shown that they are capable of pushing themselves beyond their perceived limits. They are a great example of mental toughness and hard work,” Rioja says. “I hope that others are inspired by them to go beyond their own boundaries to better themselves and their communities.”

Currently, they have raised 346 euros toward their 500 euro goal. Their GoFundMe campaign is still live and they are hoping to reach their full goal.

Rioja, who nominated them for the Athlete of the Month award, says, “They are a prime example of the SLU-Madrid value of being ‘men and women for others’ through hard work, and sacrifice, while helping others at the same time.”