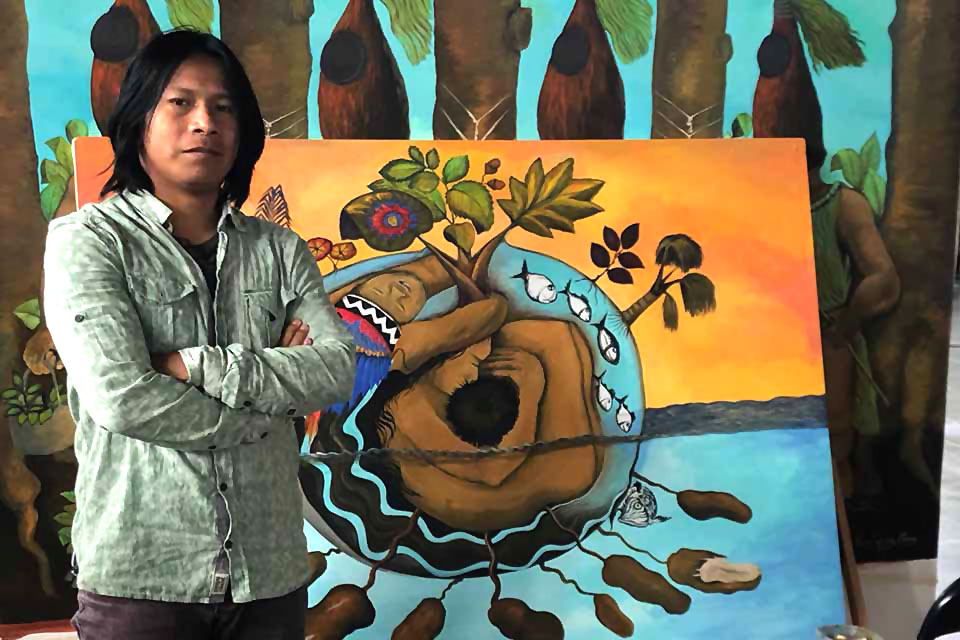 Brus Rubio poses before the painting he is currently working on, which portrays a myth of the emergence (rather than creation) of the world, represented as a plant-child being born.

The exhibit includes works by 47 Peruvian and Latin American artists from the Amazon basin distributed across four thematic axes: the idea of “Amazonía” and its genesis, Amazonian cosmologies, Amazonian landscapes, and Amazonian communities and their memories. It was organized in conjunction with Madrid’s International Contemporary Art Fair (ARCOmadrid 2019), which featured Peru as this year’s guest country.

Segovia, whose areas of expertise as a philosopher include contemporary philosophy, religious studies, social ecology and postcoloniality, had a particular interest in conversing with Rubio about Amazonian cosmological representations and the inadequacy of using the adjective “religious” to label them.

According to Rubio, Amazonian indigenous peoples prefer to talk about their “stories”: stories which are not just told but also created to be told, since they acquire meaning when they are narrated, often for several hours and uninterruptedly. These stories thereby become living immaterial artifacts which disclose the world’s richness and interconnectedness, thus making it a world (in other words, worlding it)—stories, ultimately, that Rubio’s paintings are not only witness to but that also provide an additional surface of inscription capable of spreading them, together with their beauty and relevance, beyond the vast Amazonian territory. In a time when the global ecological crisis has reached an alarming peak, these eco-positive stories also remind us that other worlds are not only possible but as perfectly real as ours.

Through his conversation with Rubio, Segovia further argues:

“To mention a somewhat different but not unrelated example, the indigenous Australians who see the lizard in/as the mountain do not give free rein to an imagination that would contrast with our alleged rationality, which is apt to distinguish lizards from mountains and vice versa. There are simply many possible ways of semiotizing (or conferring meaning to) the real—and consequently many possible worlds. The question we should ask is: which relations can I establish with the real world in such and such ways? And it should be apparent that taking the slope of the mountain as an inclined plane along which commercial vehicles can ascend and go down instead of seeing it as a lizard—as some indigenous Australians see it while simultaneously realizing that one can climb it and fall from it—is just one out of the many ways in which the real may become meaningful. The mistake would be to take such possibility for reality itself.”