The experience proved moving for the residents, their families, the staff and the members of the Chorale. After performing, the students interacted with the audience, exchanging heartfelt hugs and handshakes. 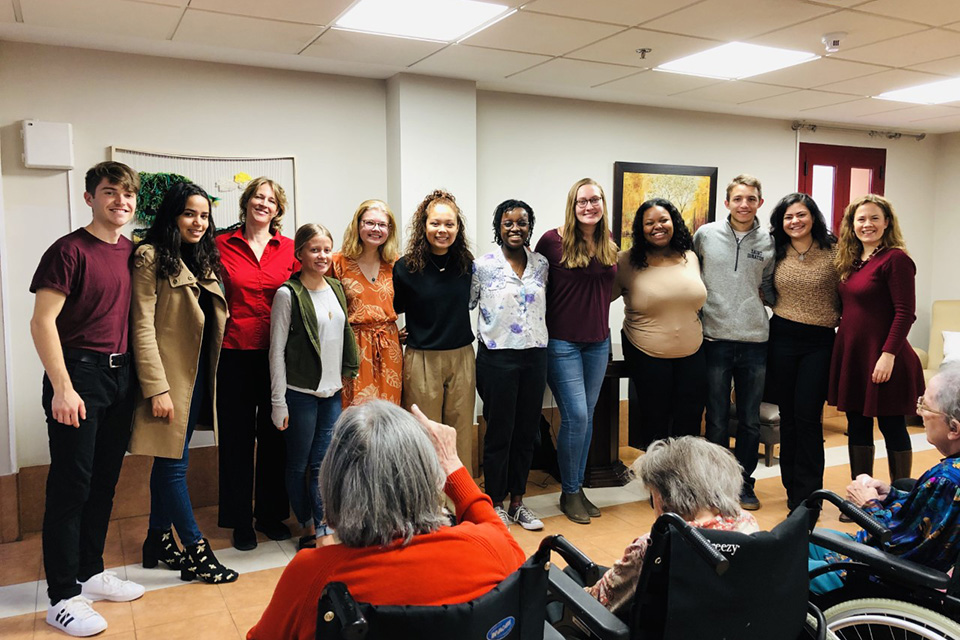 The SLU-Madrid Chorale performed three recitals at the local retirement home, Residencia ORPEA Madrid Loreto, and they will be returning to the residence to perform Christmas Carols. They have also scheduled a recital to sing holiday music for cancer patients at the Hospital Universitario Fundación Jiménez Díaz.

“It was incredibly rewarding to see the impact we had on these people,” says Danna Kaufman, a first-year student originally from Colorado. “Some of them were crying and it made me feel so grateful that we were able to improve their day.”

For Professor Gudrun Olafsdottir (SLU-Madrid voice instructor and director of the Chorale), the recitals serve as a meaningful way to make and bring beauty, expression and positive energy into the world, and, in particular, share this gift with those who cannot normally attend concerts. She noted that the workers in the residence also enjoyed a pleasant break from their daily routines. She explained, “Since the patients are suffering from dementia, they might not react at all, but some speak during the performance, and others even sing along. We really enjoy seeing the effect the music has on them.”

Olafsdottir has been part of similar outreach projects in the past. She recalls, “My grandmother suffered from Parkinson’s disease and spent her final years at a nursing home in my native Iceland. Javier Jáuregui (SLU-Madrid music program director and guitar instructor) and I would sometimes go and give small recitals there.” Later, when Olafsdottir’s father fell ill, the duo performed at his residence and eventually branched out to perform in other nursing homes and hospitals in Iceland.

Jáuregui first became involved in social outreach through music as a student at the Guildhall School of Music in London. Now, Jáuregui and Olafsdottir incorporate outreach performances as part of Hafnarborg Songfest, a summer music festival in Iceland that they founded and direct together.

Olafsdottir hopes to increase the Chorale’s outreach performances. Next on the agenda, the Chorale will perform Christmas Carols for dementia patients at  Residencia ORPEA and for cancer patients at the Hospital Universitario Fundación Jiménez Díaz.