She manages donor relations, tracks grants to ensure compliance, and identifies new donors and funding opportunities. Each year, she oversees two major fundraising events, the Annual Report Luncheon and the Derby Gala, which both bring in six-figure revenues.

The organization is currently developing a $35 million sports and learning complex that will bring transformative change to an area of West Louisville. Her fundraising labor forms a critical part of this groundbreaking project. 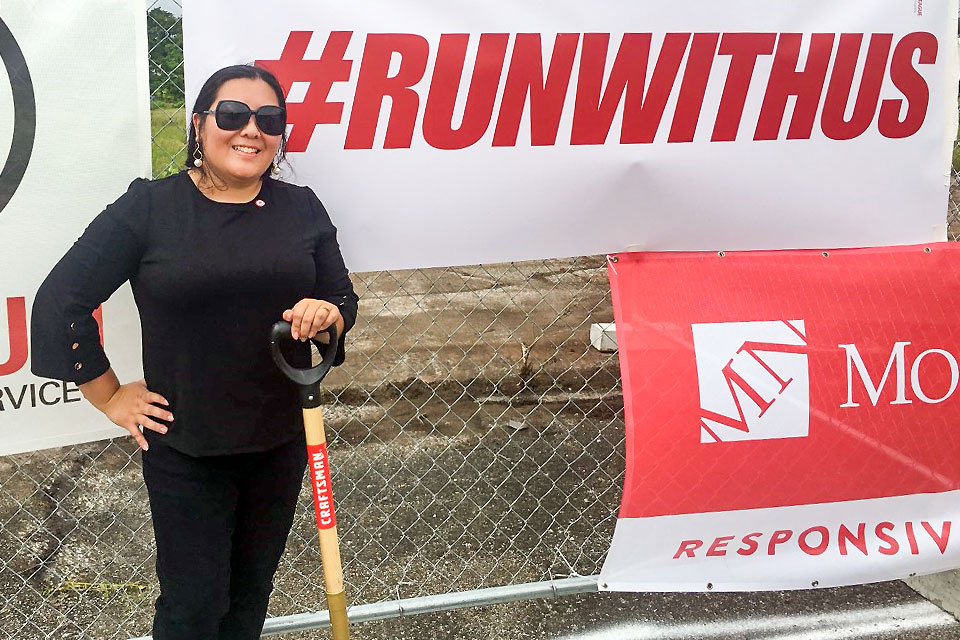 Trainor Graves breaks ground on the $35 million sports and learning complex that is expected to bring about major change in an area of Louisville that has been neglected for many years. Her fundraising efforts were critical in securing the resources needed to make this transformative project a reality.

After graduating from SLU-Madrid with a double major in Spanish and political science, Trainor Graves pursued a master’s degree from the Patterson School of Diplomacy and International Commerce. She then went on to work at Brown-Forman, a global company that produces and markets alcoholic beverages, but felt that something was missing. In search of meaningful work, she felt called to return to her hometown of Louisville where she took on her current position at The League.

Graves was originally drawn to Madrid as a summer visiting student and ultimately returned as a transfer student, motivated to study Spanish through linguistic, cultural and literary immersion. At SLU-Madrid she encountered an international community that impacted her in ways she couldn’t have imagined. “Looking back, that is when I experienced the most self-growth and awareness in my life,” she recalls. “SLU-Madrid in ways seemed like its own United Nations. I learned to have a higher level of appreciation for others and the traditions and culture they brought with them.”

Graves noted that diversity was reflected not only in the student body but also in faculty. “I took African politics from a German professor. A Mexican professor taught Eastern European politics. My Spanish professors were all native speakers but had all spent substantial time studying in the U.S. There aren't too many college campuses where this is the case. Studying under these individuals taught me to look at things from a completely different worldview.”

Another lesson learned while studying in Madrid has proved invaluable as Graves has advanced in her career: time management. While enrolled as a full-time student at SLU-Madrid, she taught English at a local school and gave private lessons. “I've always been an organized person,” she says, “but juggling so many different responsibilities really allowed me to hone my time-management skills.”

For students who are embarking on their post-college lives, Graves advised, “I think the most important thing for anyone in a career or looking to start one is to be patient, and to not turn your nose up at any potential opportunity. Everything and anything can build one's experience. Never be afraid to ask questions and never be afraid to know when it is time to walk away. I would also advise that if someone is on the fence about moving abroad (especially U.S.-based students), to go ahead and move! Once you move back home, it is very possible you will never have the opportunity to live abroad again.”