On November 30, Dr. Paul Vita, academic dean and director of SLU-Madrid, delivered the keynote address at the 14th Annual Founder’s Day Celebration of the American University of Nigeria (AUN).

Vita was invited to the city of Yola in Adamawa, Nigeria, to help celebrate the historic founding and growth of the AUN, Africa’s first development university, founded by his Excellency Atiku Abubaker, the Nigerian philanthropist and politician, who served as the country’s vice president from 1999 to 2007. 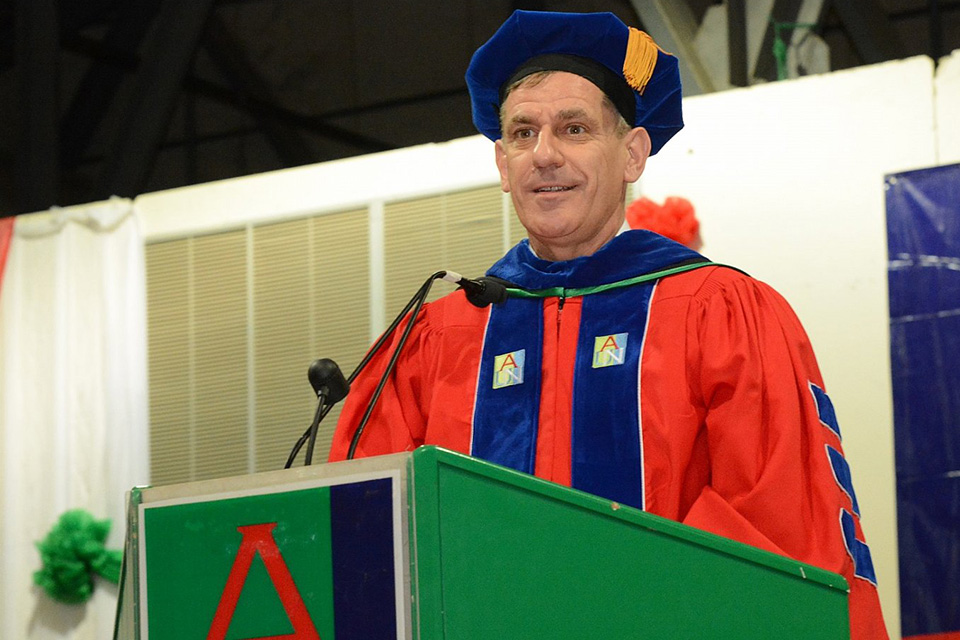 Academic Dean and Director of SLU-Madrid, Dr. Paul Vita, joins an elite group of speakers who have delivered keynote addresses at the American University of Nigeria’s annual Founder's Day. Vita spoke about the role of liberal arts in preparing future leaders to face the complex demands of our globalized world.

The keynote speech focused on the role of the liberal arts in American post-secondary education: how studying across academic disciplines prepares future leaders to respond to the “diverse and complex society for which we are all responsible.” Vita joins an elite company of keynote speakers who have delivered speeches since the inaugural Founder’s Day in 2006, including African Bureau Chief of The Wall Street Journal Joe Parkinson and the Founder himself.

During his visit, Vita also conducted a workshop for the honors students enrolled in AUN’s “Emerging Leaders Academy.” He visited an undergraduate English literature class as well, where he led a class discussion of Gerard Manley Hopkins’s poetry.

AUN – like SLU-Madrid – is an associate member of the Association of American International Universities and Colleges (AAICU). Though in different regions of the world, both institutions share a deep commitment to advancing academic excellence and U.S. liberal arts degree programs overseas.