SLU-Madrid sports director César Rioja named Mariana Casanueva Athlete of the Month to honor her achievements as a soccer player.

She is currently the starting goalkeeper for Union Adarve’s senior women’s team. Now in her second semester at SLU-Madrid, Casanueva follows a rigorous, elite-level training schedule while pursuing a degree in communication. 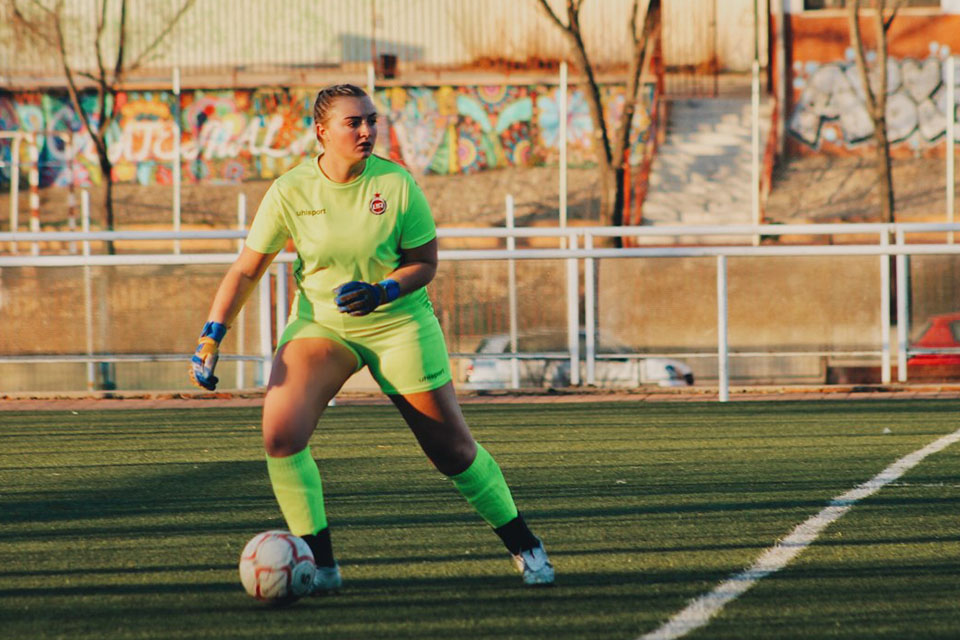 Casanueva is the goalkeeper for Union Adarve’s senior women’s team. Rioja named her Athlete of the month in honor of her commitment to both athletics and academics.

Originally from Mexico City, Casanueva began playing soccer when she was six years old. At the age of 16, she was recruited to play soccer at one of the most elite sports and academic institutions, IMG Academy in Florida. There, she excelled both as an athlete and a student for three years. She played in the Florida National Premier League and was invited her senior year to play in the prestigious Development Academy.

While in her senior year at IMG Academy, Casanueva was recruited to play soccer at various NCAA Division I universities, but she was drawn to Europe. “I’ve always had the dream to come play in Europe,” she says. She first visited Spain with her family when she was 10 years old, before returning with a group from IMG Academy on a training trip, where they trained with Real Madrid and Atlético de Madrid’s coaches. “I’m attracted to not only the European lifestyle but also European fútbol. Women’s soccer in the US is a speed game, while in Europe it is more technical,” she explained.

While applying to SLU-Madrid, Casanueva was in touch with several semi-professional teams in Spain and she even tried out for Atlético de Madrid’s second team, but she ultimately decided to begin her European soccer career with Union Adarve at the recommendation of Rioja. She is the starting goalkeeper and receives rigorous, high-level training, including Monday goalkeeping sessions with the Union Adarve men's team, who Casanueva says has been critical in improving her technical skills.

According to Rioja, Casanueva is “a very highly skilled player with excellent distribution and reflexes.” Thanks to time management skills she has sharpened on the field, she also thrives in the classroom as a dedicated student. “Sports have taught me time management and discipline, and how to honor commitment. And as a goalie, I’ve learned mental strength as well," she said.

Rioja serves as academic advisor to student athletes pursuing both their studies and athletics. In addition, he helps students searching for ways to stay active and enjoy sports while they study in Madrid.