While SLU-Madrid was closed for the holidays and students, faculty and staff enjoyed the winter break, voice professor Gudrún Ólafsdóttir and guitar professor Francisco Javier Jáuregui shared their time and talent to raise funds for a charitable cause.

They organized and performed in a Christmas concert in the Parroquia de Santa María de la Esperanza in Alcobendas (Madrid) to raise funds to support CESAL, a non-governmental organization that supports refugees from across the world who now reside in Spain. 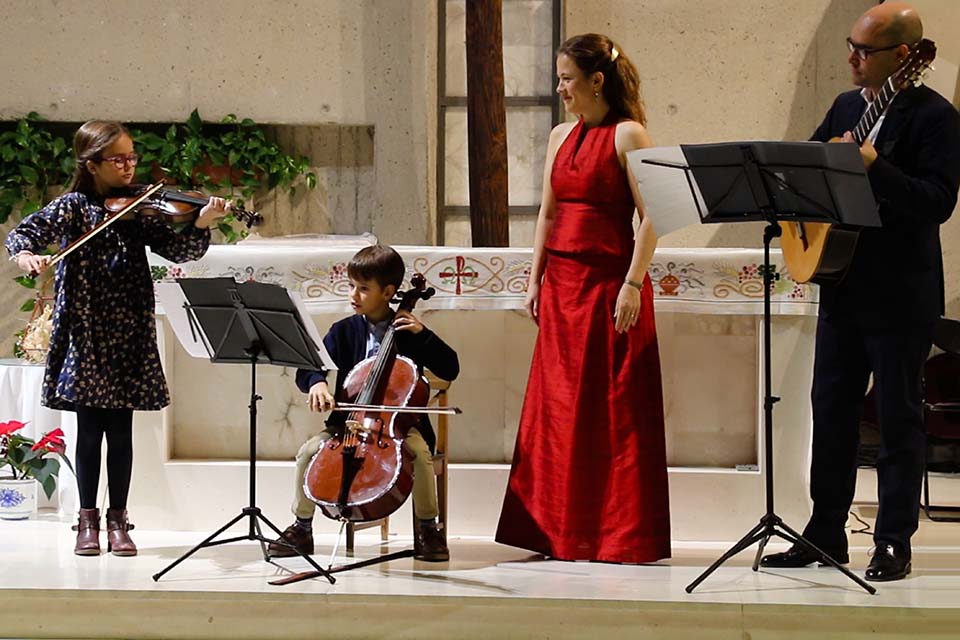 For music professors Gudrún Ólafsdóttir (second from right) and Javier Jáuregui (far right), the third edition of the annual Christmas fundraiser for CESAL proved particularly meaningful because their 11-year-old daughter, Eva (far left, on the violin) and seven-year-old son Leo (second from left, on the cello) performed as well. In addition to performing on their instruments, they also sang alongside their parents.

Ólafsdottir and Jáuregui organized their first fundraising Christmas concert in Alcobendas in 2017. Jáuregui explains, “As musicians, we try to find moments in the year to volunteer in different ways in order to take music to places where we feel that it can really make a difference, such as schools or nursing homes. Gudrún and I had been living in Alcobendas for about 10 years when we had the idea to organize a fundraising Christmas concert. We teamed up with my mother’s local parish, Parroquia de Santa María de la Esperanza, who connected us with CESAL.”

After the success of the inaugural concert, Ólafsdottir and Jáuregui were inspired to make the event an annual tradition. For the third annual concert, Ólafsdottir and Jáuregui invited renowned performing artists to take part, including violinist Blanca Fernández González, cellist Javier Morillas, and pianist Tom Sochas. Jáuregui reflects that while organizing fundraisers can be arduous, finding musicians to collaborate is never difficult, as people are happy to give their time to support a worthy cause.

Among the accomplished artists who participated were Jáuregui’s sisters Elena, a violinist who resides in London, and Maite, a professional actress, who read poems that tied in the mission of CESAL about fighting poverty and supporting migrants.

For Ólafsdottir and Jáuregui, the 2019 edition proved particularly meaningful, as their children Eva  and Leo and niece Paula  also performed. “Performing with close friends and members of our family is always such a joy,” says Jáuregui. “It’s great to involve young children in events like this one. It sparks an interest which hopefully will lead to future projects of their own. It also reminds them – and all of us – about the idea of Christmas as a time for sharing and thinking about others as opposed to only an opportunity to receive gifts and enjoy one banquet after another.”

He adds, "One of the highlights of this concert for us was to see our daughter Eva performing on the violin in the same concert as her teacher, Blanca Fernández, whose first teacher was my sister Elena over 20 years ago. Seeing these three generations sharing the stage together was very moving!”

The spirit of service is part of what makes Saint Louis University and its Madrid Campus distinct. Academic Dean and Madrid Campus Director Dr. Paul Vita remarked, “Our music faculty truly live out the Jesuit mission. It is a privilege to work with such talented and dedicated professionals, and SLU-Madrid is pleased to support their outreach efforts.”