SLU-Madrid senior Cristina Ponce de León describes the opportunity to culminate her undergraduate degree in art history with an internship in the Museo Sorolla as "an enriching experience in every possible way."

The Museo Sorolla displays a collection of works by the influential Spanish painter, Joaquín Sorolla, in his former home in central Madrid. His work is also represented in collections and museums across Spain, Europe and the Americas. 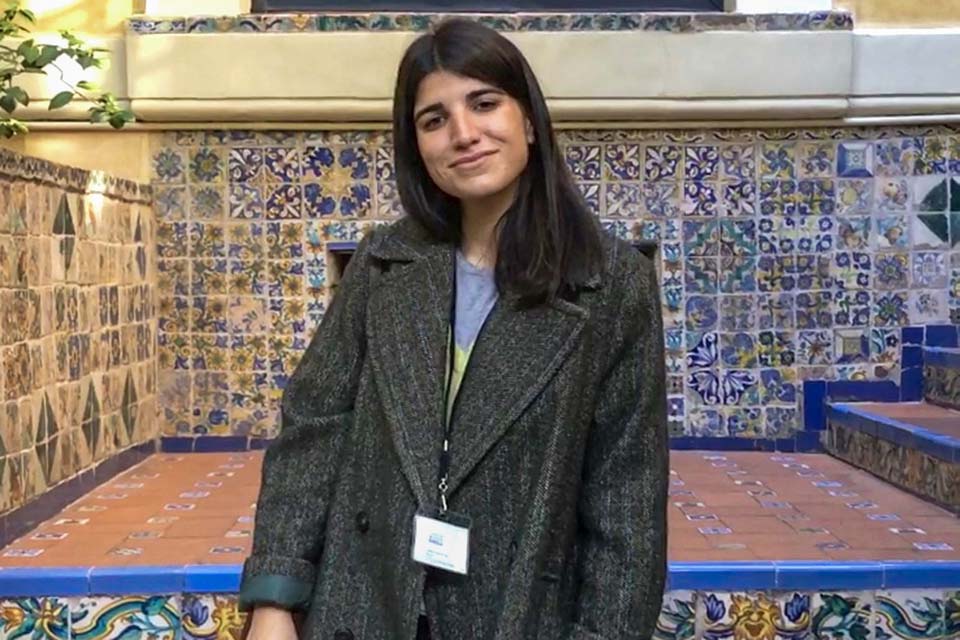 Cristina Ponce de León describes interning at the Museo Sorolla is the "best possible way" to finish her undergraduate degree in art history. Ponce de León poses for a photo in one of the museum's picturesque, tiled patios. (Submitted photo)

From her first day interning in the museum, Ponce de León has been translating texts from Spanish to English and French for the museum’s webpage as well as fact sheets for paintings and objects in the museum’s collections. "Each translation is completely different," she explained. "Among other things, this is teaching me technical and artistic vocabulary. I can also say that, almost 'unconsciously,' I am learning a great deal about the life and works of the painter as well."

As an intern in the Dissemination, Collections and Documentation Department, she has also been involved in the preparation of a new temporary exhibit, "Sorolla, Femenino Plural." "I was lucky to be able to see the assembly of the exhibit, observing firsthand the amount of work put in by the curators, experts in assembly, and other organizers and supervisors. The truth is that I had never been aware that it requires several years of organization to prepare an exhibit of this nature," said Ponce de León. The preparation culminated in a private visit to the exhibit led by one of the curators, a renowned art historian and expert in the works of Sorolla, who offered an exclusive, inside look into the research, details and anecdotes behind the exhibit.

The museum had been planning a special public event for the inauguration of "Sorolla, Femenino Plural," which ultimately was cancelled for public health reasons. For Ponce de León, this served as a powerful reminder of the importance of improvising and being flexible, particularly in such uncertain times: "I learned that sometimes you have to accept that things don’t always turn out as expected. As my officemate says, this is just ‘part of the job.'" 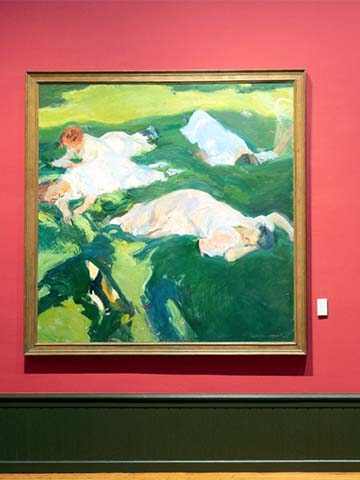 Ponce de León, who had visited the Museo Sorolla many times before she ever began interning there, has an affinity for a particular series of paintings in Sala 1, which she feels represent Sorolla's art, style and technique. Here, she describes her favorite of the series, which is entitled, The Siesta: "In this painting, Sorolla depicts his wife and daughters as well as their cousin lying on the grass, resting in a particularly carefree and nonchalant manner. As an art history student, what I find most appealing in this painting is Sorolla's liberty in terms of style and execution, opting for a very free and loose brushstroke, leaving several parts of the canvas "completed" but not "finished." I also love the feelings/sensations that this painting produces for me the more I look at it: a very special sense of calm and peace." (Submitted photo)

Ponce de León recently attended the assembly of a display case dedicated to the novelist Benito Pérez Galdós in commemoration of 100 years since his death. The display reflects the close relationship between Galdós and Sorolla through photographs, personal dedications and letters. She translated the main information and fact sheets for the objects in the display as well as the content of the dedications and letters. She also took photos during the assembly process for the department’s social media, which has taken on increasing importance due to the restrictions brought on by the pandemic.

"I am really enjoying the opportunity to accompany museum supervisors at special moments, including when the museum is closed. The museum is not open to the public on Mondays, but a lot is going on behind closed doors," she said.

Ponce de León was born in Madrid, but lived for several of her formative years in London and Brussels. Her interest in art and art history was awakened at an early age, largely due to her family who had always valued art and culture highly. The French and British schools she attended as a child also emphasized the importance of art and creativity. She began drawing and painting when she was 12 years old, and by the time she turned 20, she knew that she wanted to study art history and learn about the great masters. Since, she has developed a vocation for education and aspires to be a teacher.

"Because I have been exposed to different educational systems (Spanish, French, British, and American), I try to take away what I like most about each. One day, I would like to be a teacher who inspires students to apply what they learn, and awakens a love for learning. In my internship, I am paying close attention to the work of guides and curators, in how they explain and express their ideas. I can only hope to one day give classes that are so interesting! I am certain that the lessons learned in my internship will accompany me for many years to come, and will be applicable wherever I work."