Lombardi-Moreno Honored as Athlete of the Month

Sports director César Rioja named Elías Lombardi-Moreno Athlete of the Month in recognition of his accomplishments on the basketball court. A talented player who stands out as a high scorer, Lombardi-Moreno currently plays small/power forward for Zentro Basket Madrid, a third division professional team in the Spanish EBA. 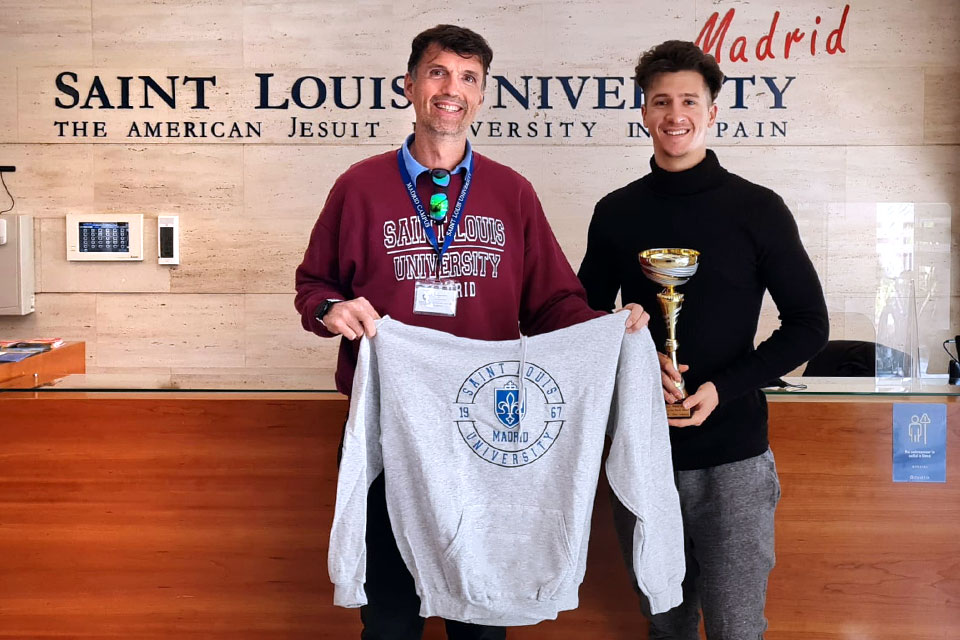 Sports Director César Rioja presents Elías Lombardi-Moreno with the Athlete of the Month trophy. He nominated him for the award in recognition of his accomplishments as a semi-professional basketball player as well as his exemplary dedication to serving those in need.

According to Rioja, "Lombardi-Moreno is a very complete player in every aspect, both on attack as well as on defense. He is a hard worker and pushes himself to the maximum in both his academic and athletic careers."

A native madrileño, Lombardi-Moreno actually grew up in Vermont, where he started playing basketball in third grade. He excelled locally, ultimately qualifying to play in the all-league team for Marble Valley, a competitive regional league in southern Vermont which encompasses more than 25 different teams. During his high school years, Lombardi-Moreno played for the Brattleboro Union High School Colonels team, at which time he consistently ranked as one of the top scorers in the state. He also played for the Amateur Athletic Union team, Drive Hoops, out of Greenfield, Massachusetts. 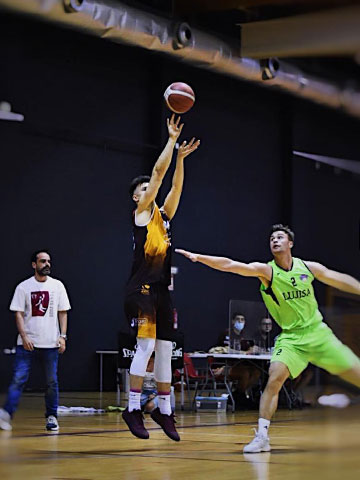 When he was a freshman in high school, Lombardi-Moreno suffered a traumatic leg injury, an event that has shaped the person and athlete that he is today. He fractured a bone in his leg, which resulted in a blood clot that pinched his perennial nerve, causing it to shut down. He suffered excruciating nerve pain and major mobility limitations which put into question whether he would recover the ability to walk, let alone continue to play basketball. His recovery led him to discover the importance of fitness and nutrition, and taught him to always see the cup as half full. Looking back, he even identifies the injury as a blessing in disguise.

Lombardi-Moreno was recruited and later played Division 3 basketball at Castleton University before transferring to his native country during his sophomore year. He is now in his final semester at SLU-Madrid, pursuing a degree in political science and international relations, with a minor in philosophy. After graduation, he hopes to continue to play basketball and find employment that will allow for a balance between work and athletics.

In addition to his success on the court, both in the United States and internationally, Rioja lauds Lombardi-Moreno for his dedication to serving the greater good. Lombardi-Moreno's outreach to at-risk youth actually stemmed indirectly from his love for basketball. When he was growing up, he and his friends spent a lot of time at the local Boys and Girls Club, where there was a court. Over the years, he grew close to the Club's staff, and ended up volunteering at their summer camp, which served children coming from difficult family situations. He then went on to serve as a counselor at a camp offered by Health Care and Rehabilitation Services of Vermont, a social work company.

"It's important to help your community as much as possible," he said. "You never know whose life you could change by just putting forth your best energy into their life."