The COVID Cohort: An Atypical First-Year Experience for Malena Mourino

Like millions of other first-year college students, Malena Mourino’s college career kicked off during the global pandemic. After completing the fall semester online from her home in Encino, California, she arrived in Madrid for in-person classes more than a month after spring classes began due to a delay in processing her student visa. 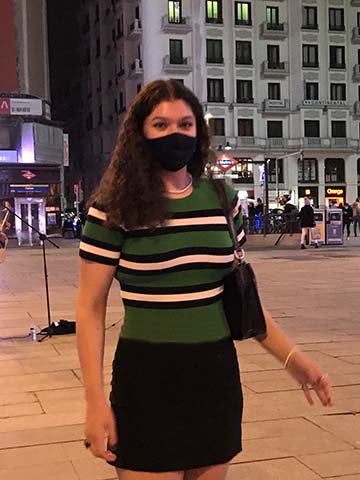 While the first semester of college can be a challenging transition for many students even in normal times, the pandemic has magnified typical challenges, like making friends and learning time-management skills. Nonetheless, in a span of just a few months, Mourino says she has learned a great deal about herself and her core values, as well as an ability to accept what she cannot control and appreciate what she has.

“I feel so lucky and so privileged to be here, in-person now,” she said. “My experience has shown me that even when there are obstacles, everything works out. It is all about having faith and trusting.”

Mourino, together with her family, made the decision to study remotely during the fall semester, her first semester as a university student, as a health precaution. They intended to monitor the evolution of the pandemic and reevaluate whether Mourino would study in-person in Madrid for the spring semester. She completed five classes last semester remotely, all of which were asynchronous due to the nine hour time difference between Madrid and California. One of these classes was Advanced Strategies of Rhetoric and Research, taught by Anne McCabe, Ph.D.

Last fall, McCabe taught this class in a hyflex modality, with some students present in the classroom, others connected via Zoom in real-time, and a group of four students, including Mourino, who took the class asynchronously by watching recorded modules. According to McCabe, discussing texts and workshopping writing are critical components to the course. With two students in California, one in Colorado and one in Tijuana, Mexico, McCabe realized that the group could hold their own live discussions in their time zones so as not to miss the critical discussion and peer-focused aspects of the course.

Mourino and her peers began to hold class discussions as a small group. They would record the sessions, which McCabe would review and offer feedback. “Without a teacher present in the discussions, the students developed a new dynamic. They pushed the discussions forward without teacher validation. This challenged them to become more independent in their critical thinking,” she explained.

For Mourino, the asynchronous class group also opened doors to socialization. As a remote, first-year student, she naturally faced considerable challenges in meeting and socializing with her peers. As the semester progressed, the four students got to know one another well, and would enjoy chatting with one another before and after recording their discussions for McCabe. In fact, Mourino even chose a roommate for the upcoming semester through this group. The four students are now in Madrid and have finally been able to meet in-person.

Mourino came to Madrid for the first time as a junior in high school on a cultural awareness trip organized through her high school. She and her peers visited Madrid for a week and spent three weeks in Alicante, where they stayed with host families. Growing up in a household with a Dominican mother and an Argentine father, she already spoke Spanish and felt immediately at home in Spain. She was also charmed by Spanish culture, slowing down the pace of life to enjoy long sobremesas with her host family and branching out to try new foods. Mourino especially loved the bocadillos her host mother would prepare.

Mourino also has family roots in a village in Galicia, in the north of Spain, where her grandfather was once a shopkeeper. She brought primary documentation from his business holdings with her to Spain and looks forward to traveling to the village one day to learn more about his life and her ancestry.