Laura Moyneur (Class of '20) is currently living in Asunción, Paraguay, where she is leading college readiness activities for talented, low-income students who aspire to attend colleges and universities in the United States. A recipient of an English Teaching Assistant (ETA) grant from the Fulbright Commission, Moyneur joins a long tradition of SLU Fulbright scholars, including Madrid Campus graduates Madison Murphy Barney ('16), Amy Brabec ('15) and Annabelle Wilmott ('14). Fulbright is a U.S. government-sponsored international educational exchange which operates in more than 150 countries worldwide.

Moyneur's main job is with EducationUSA, a global network of advising centers supported by the U.S. Department of State. She assists the EducationUSA advisors with interviewing students for the Competitive College Club (CCC) and Opportunity Funds Program (OFP), which support talented, low-income students hoping to pursue college degrees in the United States. She also offers guidance to students throughout the college application process. This includes leading SAT and TOEFL preparation courses, helping students write college application essays and resumes, teaching students how to write and send professional emails, and other tasks that arise along the way.

One of Moyneur's favorite activities in her role with EducationUSA is the book club she holds for students who have already applied to U.S. universities and will be attending in the fall. The club was initially formed two years ago by a group of students. Moyneur loved the idea but thought to create a spin-off group that would specifically read American literature. "Because the students will be attending school in the U.S., I felt that it would be useful for them to read some classic American literature to better understand the history and culture of the United States," she explained. "Furthermore, I thought it would be a good way to give the students an introduction to what would be expected of them in their English courses in college. For example, we've discussed the use of figurative language (such as metaphors, similes, personification, and irony) as well as symbols, motifs and themes. This will hopefully give them a good literary foundation so that they feel more prepared for English classes." 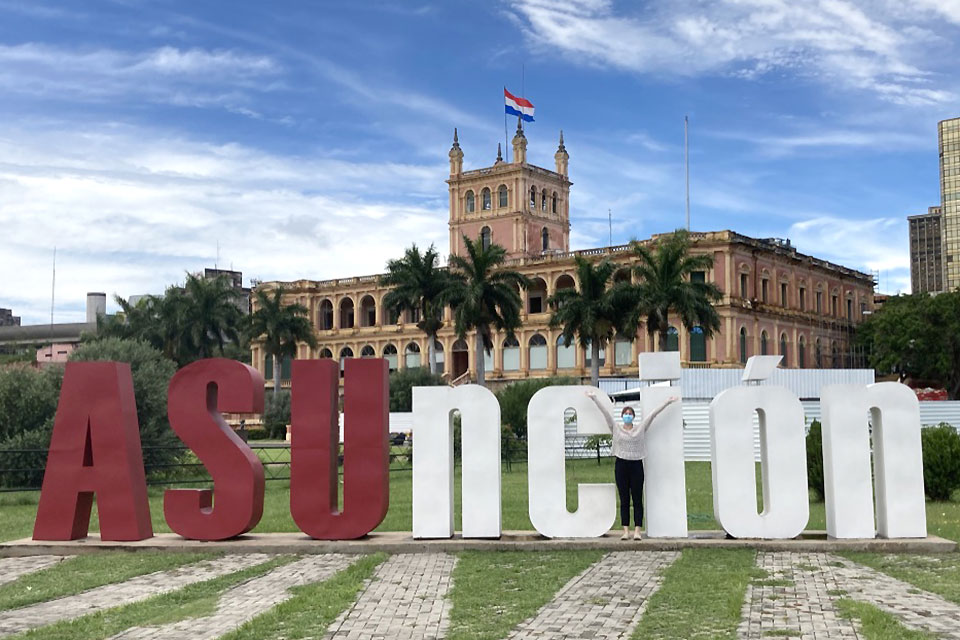 Moyneur believes that the time she spent at SLU-Madrid prepared her not only for the role she fulfills with EducationUSA but also for adapting to life in new places and cultures. Submitted photo.

The first book Moyneur read with the book club was "Of Mice and Men," followed by "To Kill a Mockingbird." In preparation to read the latter, Moyneur gave them an overview of segregation and Jim Crow laws in the United States to help them better understand the historical context in which the novel takes place. "Many of the students told me during the discussion that they were so glad that we were talking about this, not only because it's good information to know before going to school in the U.S., but also because it makes them reflect on their own educational system," she said. "One student told me that teachers do not talk about Paraguay's past with this perspective; that is, with the intention of admitting to its past problems in hopes for a better future."

Moyneur also led the club in reading and analyzing "The Color Purple," "The Great Gatsby," and "The House on Mango Street." "I think many of the students have realized that we can learn a lot from literature. Novels draw the reader into the social issues and injustices of various time periods and places throughout history. They enhance and enlarge our humility by helping us imagine and understand lives quite different from our own," she said. The members of the book club will be heading to the United States in mid-August to attend university.

In addition to her work with EducationUSA, Moyneur is also working with the in-country Fulbright alumni network. She has given webinars to students applying to master's and Ph.D. programs in the U.S. on how to write professional resumes and personal statements.

As a SLU-Madrid student, Moyneur assisted Anne McCabe, Ph.D., in the English Writing Center (now the Center for Eloquentia Perfecta) for three years. In this time, she helped students whose first language was not English to write essays. "My time in the English Writing Center taught me how to better explain the goals and characteristics of good writing, help the students to grasp differences in style across cultures, and communicate clearly and constructively," she said. "I now put these skills into practice on a daily basis in my work with EducationUSA."

Despite her job title as an English Language Assistant, Moyneur does not actually teach English in the classroom in the conventional sense. Fulbright allows each country to determine the role of their ETAs. In the case of Paraguay, they do not lead language classes in schools. Nonetheless, Moyneur’s contact with students continually serves to reinforce their English-language skills.

Outside of work, Moyneur joined a long-term volunteer program with Paraguay’s Habitat for Humanity. The program has two distinct stages. In the first, volunteers are trained in tools for the community approach, that is, they learn the tools and methodologies to diagnose the needs of communities, prioritize threats and propose mitigation actions. In the second stage, volunteers use their skills to formulate and execute a plan. Examples include repairing and cleaning community parks, installing lighting on neighborhood streets, preparing and placing garbage cans, and offering training on COVID safety and prevention.

Moyneur reflects that her time at SLU-Madrid aptly prepared her for her role as an ETA in Paraguay. Living abroad as a SLU-Madrid student for four years challenged her to become more independent and taught her how to navigate new places and cultures. Taking with her the lessons learned in Madrid, she arrived in Paraguay and was able to find an apartment, get WiFi installed, make friends in times of social distancing, and navigate the public transportation system which has no maps or apps to help you get around.

"While it has been challenging adjusting to a new place," she said, "it has been really fun and exciting as well. My time in Madrid has definitely made the transition smoother."