Through SLU-Madrid's Summer Immersion Practicum in Nursing, Saint Louis University nursing students not only practice their technical skills but also learn about health and wellness through the eyes of their Spanish patients and mentors.

Summer immersion students complete four to five weeks of training in a Spanish hospital or health care facility. Launched in 2017, the competitive program counts as a nursing elective course, meaning students who participate get a unique study-abroad clinical experience without delaying their paths to graduation. 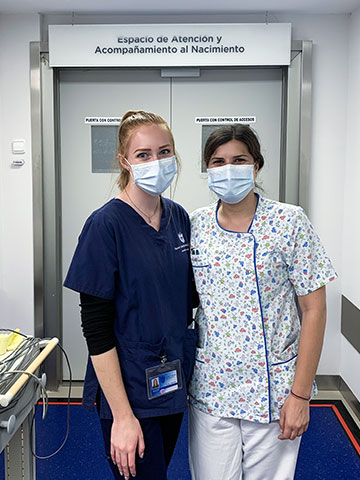 Spanish nurse Dalva Blanco Pérez (right) served as SLU nursing student McKenna Toussaint's preceptor this summer while she completed clinical hours at La Zarzuela hospital. Toussaint has had the chance to work with all of the nurses on the maternity ward during her shift, who each offered tips and tricks of the trade. Submitted photo.

Participating students are required to have an advanced level of Spanish. "Practicing nursing in a foreign language is a key challenge in the program," said de la Fuente, "but one that inspires students to solve problems creatively and to step outside of their comfort zones."

"I was drawn to the program because I saw it as the perfect opportunity to keep improving my Spanish in a medical setting," said McKenna Toussaint, a rising senior who is participating in the program this summer. She is pursuing a minor in Spanish in addition to her nursing degree.

When students apply to participate in the program, they can choose a specialty area based on patient age including pediatric, adult and geriatric rotations. They also work in a variety of care settings. Toussaint applied for placement on a maternity ward. She knew that she had an interest in maternity nursing after completing her clinicals in St. Louis last year. She was delighted to be assigned to the morning shift in the maternity ward at the Sanitas La Zarzuela hospital.

Toussaint explained that her first few days in the program were mentally exhausting. "I had to adjust to not only using Spanish in the medical setting but also to the practices in the unit itself.  Things as small as the Spanish names, nicknames or brands of supplies by which they are referred to was something I had to pick up on the first few days. I have also had to get used to the abbreviations they use here."

As the weeks progressed, Toussaint said that she began to feel more and more confident on the floor. "Every nurse and tech has been incredibly welcoming and happy to explain these communication nuances."

Discovering New Joys in the Profession of Nursing

In her clinical experience in the U.S., Toussaint would go to each hospital just once a week, so it was unusual to see the resolution of patient care. In her placement at La Zarzuela, however, she has had the chance to see many families progress from the first hour with their newborns in their arms to heading home from the hospital.

"It was extra special to see families who faced small struggles with the newborn or those whose newborn was in the Neonatal Intensive Care Unit (NICU) for a period of time get to go home," she said. "Seeing these moments here has shown me one of the many things to love about this profession."

"This program has given me more experience working with postpartum patients and newborns," she continued. "I’ve gotten to take part in their routine care, and I've also had the chance to recognize abnormal signs and symptoms in these patients and see the interventions taken to help treat the problem that arose. And, of course, with each new nurse I work with, I pick up more nursing tricks that you can’t learn from a textbook."

The placement on the maternity ward has also presented Toussaint with a new clinical experience: the NICU.  "Before this program, I was most interested in working in labor and delivery, but my time here has greatly increased my interest in working in a postpartum unit/NICU as well."

While Toussaint reported having discovered interesting differences between nursing practices and the culture of health and wellness between the U.S. and Spain, she has also encountered countless similarities. Being so far from home yet finding so many similarities, both among health care practices as well as patients themselves, has proved fascinating she said. Nonetheless, she has seen different treatments and interventions and looks forward to discussing the pros and cons based on research and practice with medical professionals back in the U.S.

"One of the reasons I chose SLU was because it is known to have a high-quality nursing program," she concluded. "Overall, I feel that SLU is setting me up well for my career goals while giving me the global perspective I want to have as a person."