The Observatory on Contemporary Crises (OCC) proudly announces the launch of an official partnership with the EU-focused newspaper, Brussels Morning. This online news outlet also has a monthly printed edition that is widely distributed among representatives in institutions such as the European Commission and the European Parliament. With this partnership, the OCC adds a European and international dimension to the principles that it has patiently built its existence on: originality, objectivity, depth and quality.

According to OCC Director Barah Mikail, Ph.D., Brussels Morning and the OCC share a mutual interest in international affairs, crises, global issues and the necessity to understand them and address them correctly. Brussels Morning was interested in partnering with an academic outlet that looks at events with distance and objectivity. The OCC was naturally open to a partnership with an outlet that is focused on and read by EU institutional representatives, that has a wide audience, and that would be interested in benefiting from an objective approach to the analysis of events.

SLU-Madrid graduate and M.A. in Political Science candidate Catherine McQueeny ('21) is inaugurating the institutional partnership with Brussels Morning with a biweekly column called, "The International Wire," which she opened with the article, Afghans Refuse to Stay Silent in the Wake of the Country's New Future. Both SLU-Madrid and Brussels Morning felt McQueeny was a natural choice for the partnership, as confirmed by the high quality of the first piece she published. 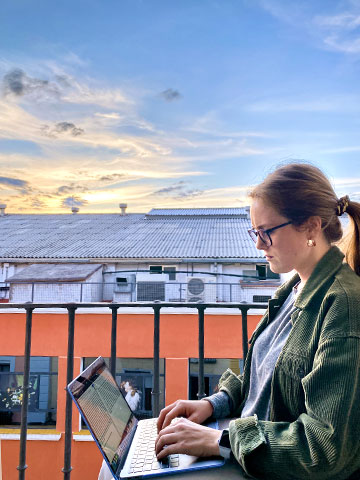 Catherine McQueeny recently graduated from SLU-Madrid and is continuing on to pursue an M.A. in Political Science and Public Affairs with a concentration in International Relations and Crisis. Her research interests focus on the interplay between perception and political change in web-based societies, including cases such as vaccine diplomacy and Qanon. Submitted photo.

"Since she joined our [political science] program, she fascinated us with her open mindedness, her curiosity, her writing skills, her enthusiasm as well as her reading capacity," commented Mikail. "Few students read as much as she does, be it when it comes to reading books, to following the news or to keeping aware of the latest important events. Her profile as editorial writer is in the making, and I have no doubt it will go way beyond her work within this partnership."

McQueeny reflected that as a SLU-Madrid student, she has had ample opportunity to think and work outside the classroom in her fields and topics of interest.  She sees the partnership with Brussels Morning is a natural extension of this. "I have always…dreamed of having an outlet and experience writing politically. With Brussels Morning, I have the wonderful opportunity to do so. The experience thus far has been extremely collaborative and hands on, which I know will set me up for success later. Not only is it an experience to grow as a professional, but also as an academic and person, as I am seeing what I've worked so hard to study through the eyes and voices of those who are involved in conflicts, crises, or politics as a whole," she said.

Brussels Morning is OCC's first editorial partner, but partnerships with other institutions are in place and/or are in the making. The Jean Jaurès Foundation, a Paris-based think tank, for example, partners with the OCC as regular contributors of content related to Latin America.

"We see [partnerships] as a good opportunity for SLU-Madrid to enlarge its scope of partners both within and outside of Spain, and an opportunity for our students to explore these partnerships in a way that will allow them to acquire experience through internships, service learning agreements, etc.," Mikail explained. The OCC favors partnerships that guarantee quality publications, diversity of opinions, originality and potential research-related outcomes.

More on the OCC

The SLU-Madrid Department of Political Science launched the Observatory on Contemporary Crisis in Fall 2019. It was envisaged as a platform to keep a critical eye on the world’s key international crises through the publication of analyses and insights written by both SLU and non-SLU experts, academics, observers and students. "The OCC is a democratic tool that is open to anybody who feels like writing or talking about key contemporary issues related to crises, societies, justice, and how to address them in an efficient and constructive manner," said Mikail. This includes SLU-Madrid students, who may capitalize on the OCC as a platform through which they may see their own research pieces published.

In keeping with the targeted pace, the OCC publishes an article per week and has shown a steady increase in readership since it launched in 2019. The goal is to cover a large set of key contemporary topics within areas such as international affairs, gender issues, social justice, and health, without sticking to what is within the headlines. "We want not only to portray what a better world would look like, but also to get closer to the terms of a world in which all citizens would equally benefit from human security: that means equity, security, justice, education, health and development," said Mikail.

While the OCC is an initiative of the political science department, it also encourages cross-disciplinary collaboration across campus and beyond. Because each of SLU's departments and academic programs offers a fresh perspective on the study of contemporary crises, the OCC can leverage the uniquely interdisciplinary profile of the Madrid Campus and publishes written material and interviews with colleagues from other departments, most recently the Women and Gender Studies program. Likewise, colleagues from the St. Louis campus have joined the OCC as members of its leadership teams and steering committee, bringing with them their expertise and strengthening ties between the two campuses. "Three words summarize the spirit of the OCC: analysis, anticipation, and cooperation. The OCC is a tool that is meant to build bridges," Mikail said.