Fine and Performing Arts Students in the Spotlight

The global pandemic has challenged educators worldwide to innovate new ways to empower students while prioritizing health and safety. SLU-Madrid opted for an inclusive hybrid academic programming model to accommodate both on-campus and remote students during the 2020-2021 academic year. For faculty in SLU-Madrid's Fine and Performing Arts Department, this meant searching for new ways to stimulate artistic creativity and present the end-of-semester performances, exhibitions and symposiums.

The Spring 2021 Theatre Workshop set aside lights, costumes and props once again and produced an audio adaptation of Edgar Lee Masters' American classic, Spoon River Anthology. Natalie Alper, Becca Connelly, Verónica Fernández Pina, Patrick Murphy, Aristote Rwigara and Jillian Sosinsky play 35 different characters, each speaking from beyond the grave in monologues that have long been staples of acting classes and auditions. They paint a picture of midwestern small-town life from the mid-19th to early 20th centuries and draw parallels with some of the troubles we face in the present day.

"Actors had to convey everything with only their voices," explained Cary Barney, M.F.A., who directs the SLU-Madrid Theatre Workshop and serves as program director for the Department of Fine and Performing Arts. The circumstances of the pandemic presented students with the opportunity to explore "what theatre can do when social distancing keeps us offstage," he added.

After a year of online performances, musicians, dancers and actors at SLU-Madrid returned to the live stage at the open-air Final Performing Arts Show. Held in the courtyard behind Padre Arrupe Hall, the Latin and Spanish dance classes headlined the event with additional performances from Maddi Shuart, who studies voice with professor Gudrún Ólafsdóttir, and theatre workshop students Natalie Alper, Jilian Sosinsky, Aristote Rwigara, Verónica Fernández Pina, and Patrick Murphy, who performed a series of monologues from Spoon River. 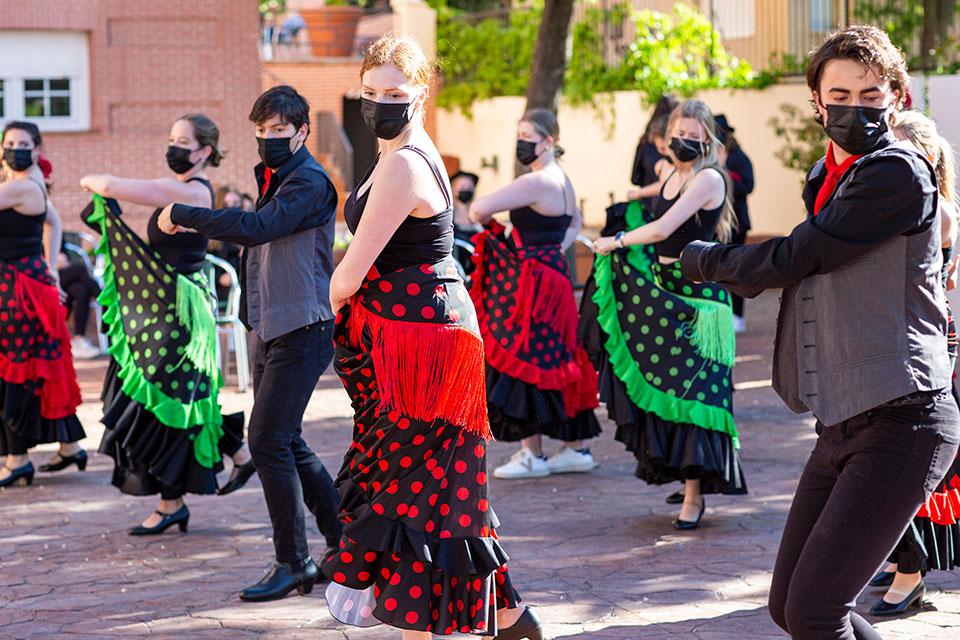 Dancers from the Latin Rhythms and Spanish dance classes performed a series of original choreographies created by dance professors Yolanda Granado and Susi Peces-Barba. From Cuban salsa and bachata to modern rumba and tango, the students performed for a live audience  as well as family and friends who were connected via livestream.

At the end of each semester, students in studio art classes showcase their works of art in the semiannual Studio Art Exhibition. In response to the continued limitations imposed by the pandemic, SLU-Madrid will exhibit student artwork via SLU-Madrid's Facebook page and Instagram stories the week of May 17. Students in Emma Ferguson's painting class also exhibited their works during the Final Performing Arts Show. Ferguson and drawing professor Óscar Sánchez noted that a major benefit of holding online exhibitions this semester, however, has been the ability for their students to share their work with a larger audience.

The Music Department also held its final concert over Zoom, with attendees connecting from Madrid, China, Italy, Iceland and the U.S. Students of vocal and instrumental music performed in the concert and, in some cases, were accompanied by their professors, even when located in different countries. Students expressed their creativity in an innovative way this semester; they made music videos of their performances. Some students filmed in their homes, others in San Ignacio Hall, and some even edited videos combining portrait shots with images of the performers out in nature. Students were then interviewed by music professors about their videos, which were streamed via Zoom and shared on YouTube.

For the first time, the Fine and Performing Arts Departments in Madrid and St. Louis came together for the inaugural Joint Undergraduate Art History Symposium. Students from both campuses presented their original research projects at this online event. "We were delighted to bring our two programs together and celebrate the research work of our students, especially after such a difficult year. What better way to finish this academic year?" said program director for art history Fabiola Martínez Ph.D.

Participating from SLU-Madrid were Jacqueline Amacker, whose presentation was entitled "Collective Unconscious in Woman Rising," and Taylor Weaver, whose talk was called "Approaching Black Aesthetics Through Decolonial and Feminist Theory: Mickalene Thomas."