Among the competitors were three guest players from the St. Louis campus: Chris Pardo, Nicholas Whitesides and Aaron Swenson. They swept the top three spots overall, with Pardo coming in first, followed by Whitesides and Swenson, who tied for second on points, each winning nine of their 11 games. In a head-to-head tiebreaker, Whitesides took second with Swenson finishing in third.

First-year student Pardo was seeded in fifth place at the beginning of the tournament. He went on to win 13 of his 14 games, losing only once to Swenson but coming back to beat him later in the tournament. Nobody was more surprised and pleased by this phenomenal performance than Pardo himself, who had only started getting into chess last summer.

"I had stayed up all night… finishing a project and doing a bunch of reading," Pardo later said. For the St. Louis players, the tournament started earlier in the day, 8:15 a.m. local time in Missouri. "At one point I had to present to a Zoom class while also playing a game," he added. "But I came out aggressive and was able to win most of my games quickly so I could move on to the next." This strategy bore fruit, as Pardo led in every metric available: most points, highest performance rating, and highest point-to-game ratio. "It’s all fun," he concluded. "I love the game and I'm glad I got to participate and play with old and new chess comrades." 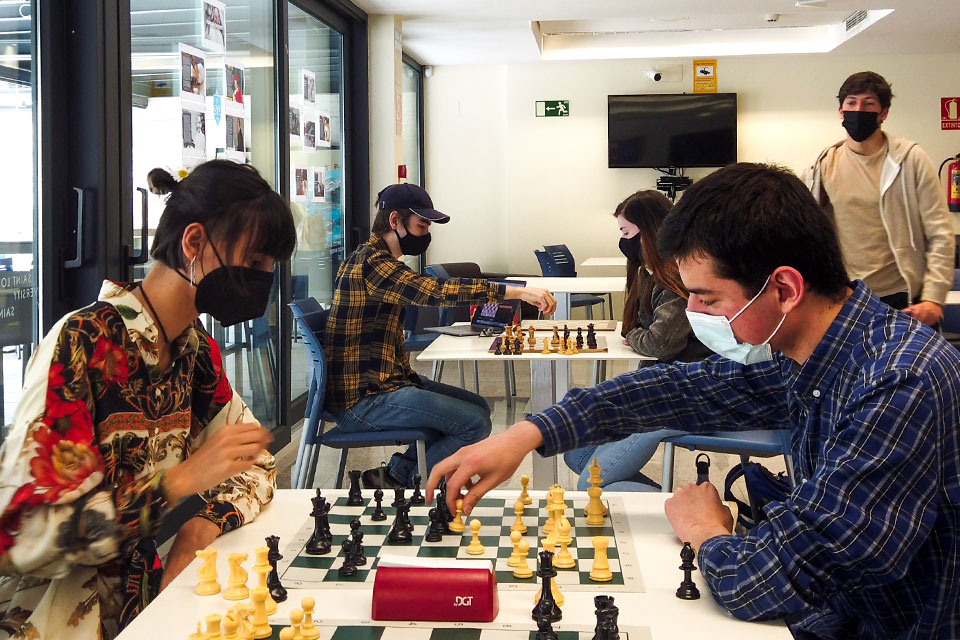 On the SLU-Madrid side of the tournament, competition was intense. Jaira Velazquez took an early lead, but twin brothers David and Ian Castellano as well as Blazo Kustudic, a dark horse in the tournament, were right behind her. A high point for the players in Madrid was when the brothers faced off with one another halfway through the tournament, hurling friendly taunts at each other. It was a close game, but David eventually came out on top.

Despite the loss, Ian was able to win three games in a row in the latter half of the tournament to pull ahead and take the lead, finishing only half a point ahead of Velazquez to win among the Madrid contestants and take the €75 prize. Velazquez, whose consistent performance earned a score of 5.5 points, came in second and won €50. Only half a point behind her were David and Kustudic, tied with five points each. As they never faced each other in the tournament, the tiebreak was determined by the average rating of each players’ opponents, with David prevailing and taking home third place and a prize of €25.

More about the SLU-Madrid Chess Club

When he began his studies at SLU-Madrid, Alexander Sprague, the current president of the Chess Club, re-chartered the club, which had not been active for several years. With the help of the Office of Student Life, he began to hold meetings. In the fall of 2019, there was an influx of interest. "That semester was when I met César Gallardo, the most skilled and enthusiastic player to join the club up to that point, and someone who would go on to be my biggest rival and greatest supporter in the club," Sprague said. Gallardo now serves as the vice-president of the club.

Chess players of all levels are welcome to join the club. The group meets on Fridays, both to learn to play chess and to compete with one another in friendly games. "This semester had the largest number of beginners César and I have seen, due in large part to the popularity of The Queen’s Gambit," said Sprague. "We have done our best to teach these new players how the pieces move, what the basic tactics and strategies are, and how to play their games. Every player in the club now knows the opening principles, many even know an opening system, and all of them know the basic endgame checkmates." He added that he believes that he and Gallardo have become more skilled players over the last two years by explaining the rules and strategies of the game to other players.

Sprague, who will be graduating from SLU-Madrid this semester, will turn the leadership of the club over to Gallardo. "I look forward to hearing how the club succeeds in the following years and continuing to play chess online for the rest of my life with the great group of friends I have been able to establish through the SLU-Madrid Chess Club," Sprague said.