When Saint Louis University President Fred P. Pestello, Ph.D., entreated graduates at the 2017 commencement ceremony to heed the call of St. Ignatius by going forth and setting the world on fire, Yasmina Benslimane (Class of '17) wasted no time. Within four years of graduating from SLU-Madrid, she has earned a master's degree, founded a non-profit organization, launched her own business, and, most recently, started working for the United Nations. Leveraging her studies in political science and communications, she is contributing to positive change in the world in areas including political participation, youth and female empowerment, migration and peace-building. 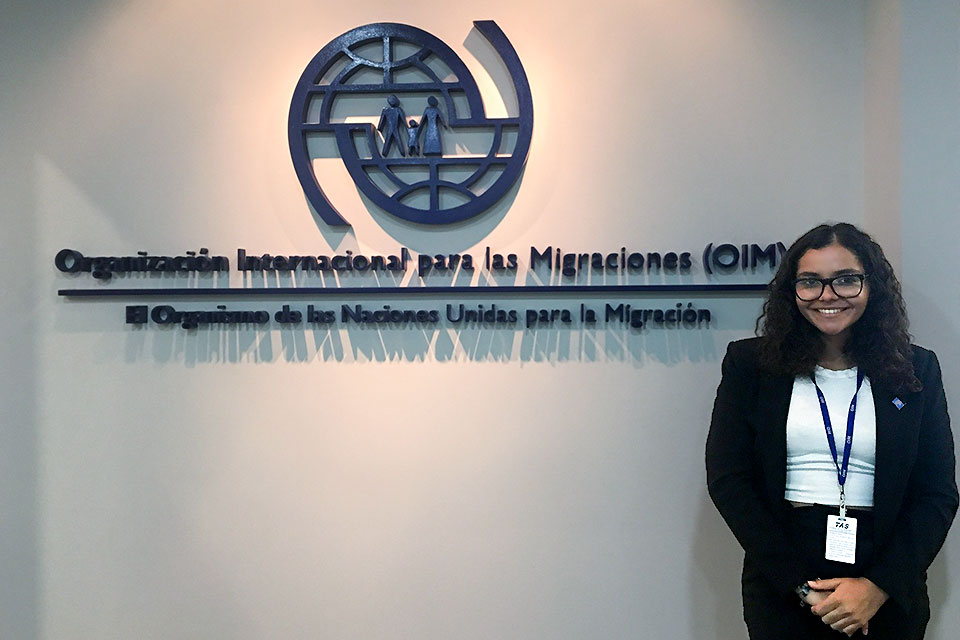 Yasmina Benslimane currently works for the United Nations Development Program (UNDP) in the UN New York City Headquarters. Her long-term career goals include growing within the UN organization and positively impacting as many young women as possible through her advocacy work.

Upon graduating from SLU-Madrid, Benslimane interned at the UNESCO headquarters in Paris, France, before moving to Costa Rica to pursue a Master of Arts in International Law and the Settlement of Disputes at the United Nations mandated University for Peace. There, she was exposed to the work being done by various UN agencies such as the International Organization for Migration (IOM), the UN Refugee Agency (UNHCR) and the United Nations Development Program (UNDP). She now resides in New York City, where she works with the Recovery Solutions and Human Mobility Team within UNDP. In her role within the crisis bureau, she supports regional hubs in Jordan and Panama, plans UNDP events and assists with launching new UNDP publications and other external interventions on human mobility.

Benslimane's work as a human rights activist, however, extends far beyond her day job at the UN. When she was studying political science at SLU-Madrid, she concluded that the field of politics is often associated with corruption, evilness and male dominance. This led her to found Politics4Her, a feminist youth-led blog and movement that elevates women's voices in politics and encourages them to be active participants. The Politics4Her Ambassadors Program identifies female leaders from every corner of the globe and provides them with the opportunities, tools and resources to build confidence and become active leaders who bring positive change, social justice, tolerance and peace to the field of politics.

Benslimane is in the process of registering Politics4Her as a non-profit organization, which will allow them to do more fieldwork and deliver more workshops to women and girls to help them realize their leadership potential. In the meantime, she has started taking on SLU-Madrid students as interns for the organization. "The students interning with Politics4Her are attending our meetings, helping create content and proposing new projects, all while smashing the patriarchy," she explained. Interns have taken active roles in creating a podcast in the Politics4Her local hub in France, as well as working to publish papers in the Lato-Portu Hub in Latin America.

In addition to empowering women through Politics4Her, Benslimane has recently launched her own Women Empowerment Coaching Program. "My ultimate goal in life is to empower women by making them believe in themselves so that they can reach their full potential and get in more leadership positions," she said. "Our participation in social, political and economic decision making is a must to acquire development."

Benslimane grew up in Morocco, where she completed her schooling in the French educational system. She was drawn to SLU-Madrid because she was keen to shift away from the French system. SLU-Madrid afforded her the opportunity to study in the American system while also staying close to her home country.

"Receiving an American education while being in Spain allowed me to embrace my multiculturalism and interpersonal skills," she said. "Being among students from every corner of the globe helped expand my vision and knowledge of different cultures. Adding to this, I learned all the theoretical skills to understand the complexities of our modern world."

When asked to offer advice to future students, she said: "Make sure to take advantage of every opportunity coming your way. SLU-Madrid has so many clubs, activities, trips and amazing people. Immerse yourself within the Spanish culture and learn from one another. Don't stress out too much about what's next, and enjoy the present moment."