The spring commencement ceremony returned to the Reina Sofía Museum Auditorium on Friday, May 13, for the first time since 2019. SLU President, Fred Pestello, Ph.D., was in Madrid to congratulate the 44 graduates from 11 countries and 11 U.S. states.

The day of celebration began with the Baccalaureate Mass in the Royal Monastery of Santa Isabel, an official cultural heritage site in central Madrid encompassing a convent and a Catholic school.

Assistant Dean Jaime Ortiz, who served as master of ceremonies, opened with greetings in both English and Spanish before Rev. James O'Leary, S.J., led the invocation. After SLU President Fred Pestello, Ph.D. welcomed everyone, Academic Dean & Director Paul Vita, Ph.D., reflected on the importance of the day and introduced the student speakers, Carlos Bestard Marqués and Abigail Dyson, both of whom emphasized the times that the Class of 2022 has faced. 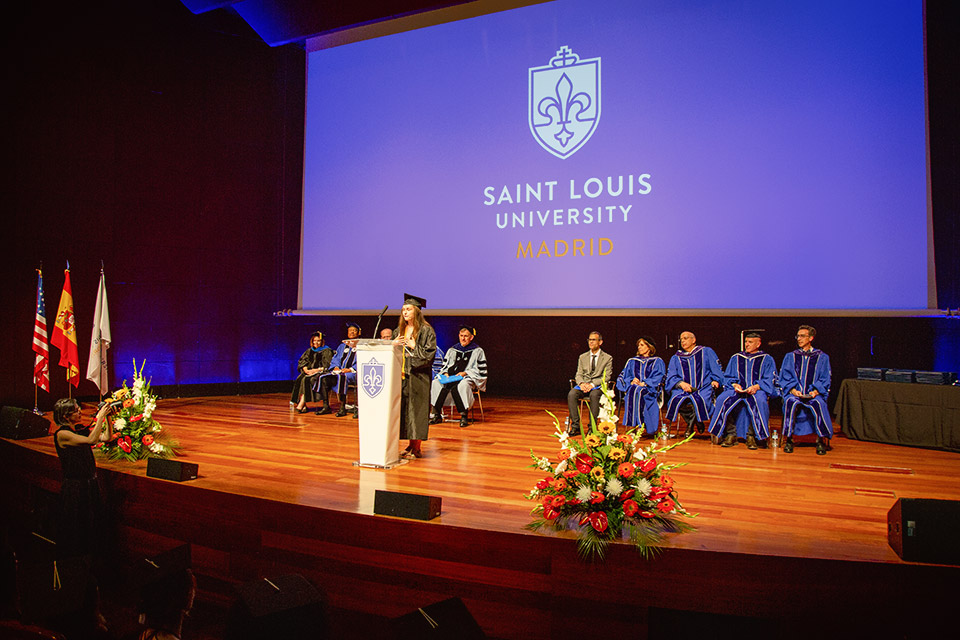 Abigail Dyson speaks to the Class of 2022. Photo by Ángel García López.

Jessie J. Knight, Jr. was awarded an honorary degree from Saint Louis University during the ceremony. He then spoke to the graduating class with a speech in which he explained how his time at SLU-Madrid in 1971 shaped his business career.

"Schools like ours draw students from students from a wide variety of backgrounds," said Academic Dean and Director, Paul Vita, Ph.D. "Our graduating class — so richly diverse in religious, cultural and national backgrounds — testifies to that reality."

After the conferral of degrees, Pestello declared the graduates sons and daughters of Saint Louis University forever.