The Jesuits of Bellarmine House 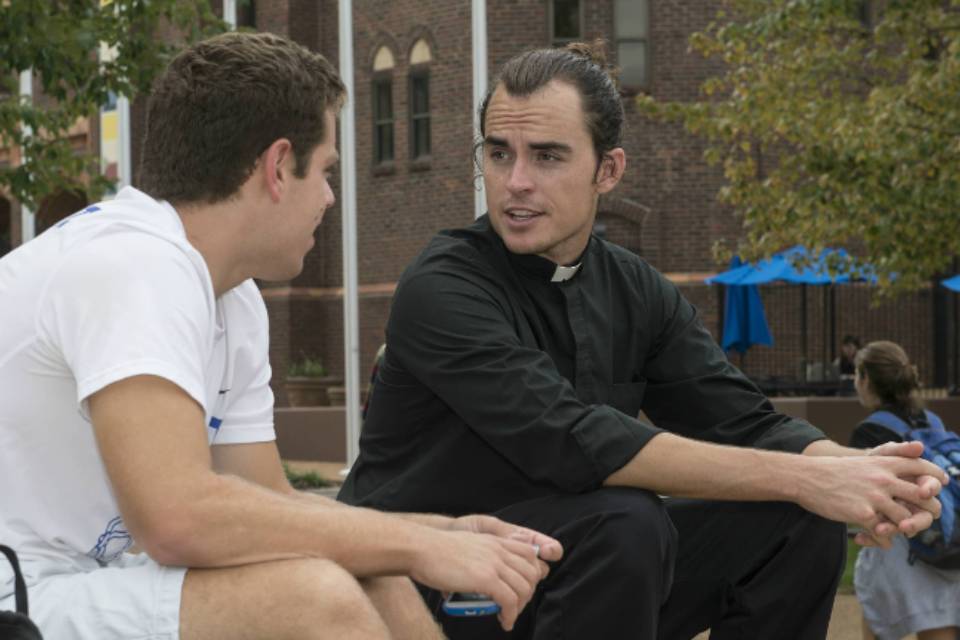 Every Friday a handful of the men host Java with the Jesuits at the clock tower or in Pius XII Memorial Library.

It’s impossible to ignore Matt Wooters. The 28-year-old graduate student is standing in the middle of a path leading to Lipic Clock Tower Plaza with a broad smile, an outstretched hand and an offer that most students can’t refuse at 9 a.m.: free coffee. Even students wearing earbuds and avoiding eye contact get pulled in by this self-described “wildly extroverted” man.

Wooters also attracts attention because in the sea of T-shirts, jeans and cargo shorts, he is wearing clerical attire: black pants, black shirt and a Roman collar. Wooters is a resident of the Bellarmine House of Studies, a home for 18 Jesuit scholastics (men studying for the priesthood), and a brother-in-formation living in St. Louis and attending Saint Louis University as part of First Studies, the second step of Jesuit formation.

“When most students think about Jesuits, they imagine older priests or maybe one of their professors,” said Wooters, a member of the Bellarmine House vocation promotion committee, which finds ways for the Jesuits to interact and build relationships with SLU students. “They don’t imagine that we’re young men, rushing to class and taking the same courses they do. Java with the Jesuits is our way of saying we’re here. We’re everywhere.”

Bellarmine House is one of only three houses of First Studies in the country. The others are located near Fordham University in New York and Loyola University Chicago. Located on Westminster Place a block from the Lindell Boulevard entrance to campus, the community under the auspices of the Central and Southern Province of the Society of Jesus.

I'm continually amazed at the gifts these guys bring the community. It makes for a very rich environment that I believe benefits the St. Louis community and that of SLU."

Along with SLU's College of Philosophy and Letters, Bellarmine House offers scholastics the chance to study the philosophy and theology required in First Studies, as well as the opportunity to work toward master's degrees in philosophy or any other discipline, including social work, education, counseling, history or American studies.

The scholastics have Mass and meals together daily, to which they often invite SLU students and other guests. On Sundays the Jesuits take turns cooking the community meal. Although it's called a house, the community is comprised of four, three-story 19th-century red brick homes with tidy lawns and well-maintained landscaping. The second and third floors of the homes serve as living quarters. The first floor of each home serves a different purpose: the chapel house; the library and social house; the dining house; and the new house used for community meetings.

Bellarmine House has the distinction of being the only Jesuit scholasticate in the United States that, from its establishment, was embedded within a university setting.

In the late 1880s, the Society's Missouri Province took the bold step of moving its house of study into the city and onto SLU's campus, where scholastics studied with lay students and professors. The young Jesuit philosophy students lived in Verhaegen and DeSmet Halls until Fusz Hall was constructed in 1954.

"It's very helpful for our scholastics to be in class with students who raise serious questions about God and who can be very critical of organized religion for good reasons or bad," he said. "It gets our men used to encountering a diversity of attitudes regarding Christianity and Catholicism. The men begin to formulate their responses to them."

A Wealth of Experience

First Studies also is considered a time of integration for scholastics. Under the guidance of experienced Jesuits, they learn to blend their intellectual, apostolic, communal and spiritual lives.

In addition to their academics, the scholastics are expected to provide eight hours of service each week in the community. They work in homeless shelters, parishes, youth centers, schools and prisons.

Today, the average scholastic is 28 and a seasoned professional. Among the scholastics currently residing in Bellarmine House are an Iraqi War veteran, a financier, a physician, an architect, a physical therapist and a former Teach for America volunteer.

"I'm continually amazed at the gifts these guys bring the community," said Greene, who practiced law before entering the Society of Jesus and went through formation with a man who trained animals for film and television. "It makes for a very rich environment that I believe benefits the St. Louis community and that of SLU."

Java with the Jesuits Goes Virtual

While Java with the Jesuits, SLU’s favorite coffee klatsch, usually meets in person for pastries and caffeine on-campus, due to the COVID-19 public health crisis, the SLU community has gotten creative to keep the tradition going strong.